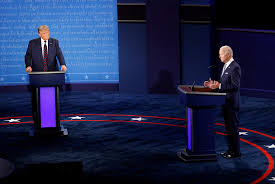 The debate started out professional and political, but quickly turned personal.

Past presidential debates have had inappropriate statements made by candidates, but none were as bad as the endless reign of commentary made by both Donald Trump and Joe Biden. Between Trump mentioning Biden’s sons and calling coronavirus “the China plague,” and Biden calling Trump “Putin’s puppy” as well as calling Trump a clown on more than one occasion, neither candidate respected this debate.

Joshua Dyck, Director of the Center for Political Opinion and expert in elections, campaigns, and national and state politics, said that this debate was “not normal” when compared to past presidential debates. He said that “the first 2020 debate was not so much a debate as a shouting contest, with the president interrupting his opponent more than 70 times in a 90-minute period, causing his opponent to tell him to shut up and call him a clown.”

The debate “was unwatchable TV and it will go down in history as a low point for American democracy. Debates are about an exchange of ideas, where candidates can put forward their contrasting visions for the country. They can certainly at times get testy or acrimonious, but they are also dignified events. This was less presidential and more WWE,” Dyck said.

Another statement that will stay in audience’s heads for years to come was Trump refusing to condemn white supremacy when asked by moderator Chris Wallace. Instead, Trump said, “Sure, I’m prepared to do that. But I would say almost everything I see is from the left-wing, not from the right wing. If you look, I’m willing to do anything. I want to see peace.”

When asked again by Wallace to openly condemn white supremacy, Trump said, “Proud Boys, stand back and stand by. But I’ll tell you what: somebody’s got to do something about Antifa and the left. Because this is not a right-wing problem — this is a left-wing problem.”

Dyck said Trump’s inability to condemn white supremacy was “not new and who he is.” He compared this to an event in 2016 where “Trump refused to disavow David Duke and the KKK when Duke endorsed him and then later had to walk back his comments.”

Dyck continued on to say that Trump’s “presidency has been a cascading parade of dog whistles and overtures to white supremacy, including his famous ‘good people on both sides’ comment in response to the events in Charlottesville. More recently, Trump has ended federal programs in racial sensitivity training, calling them un-American because they call attention to America’s troubled history of racism and discrimination, from slavery, to Jim Crow, to the KKK, to inequality in the criminal justice system.”

The majority winner of the debate was Joe Biden, “as he appears to have a modest polling lead right now,” Dyck said.

Dyck wants to remind students that the current election climate is not normal. “There have been recent elections where the majority of Americans actually liked both candidates. … Don’t listen to what anyone says is a truism about the election. The only person that holds agency over your vote and your voting decision is you,” Dyck said.