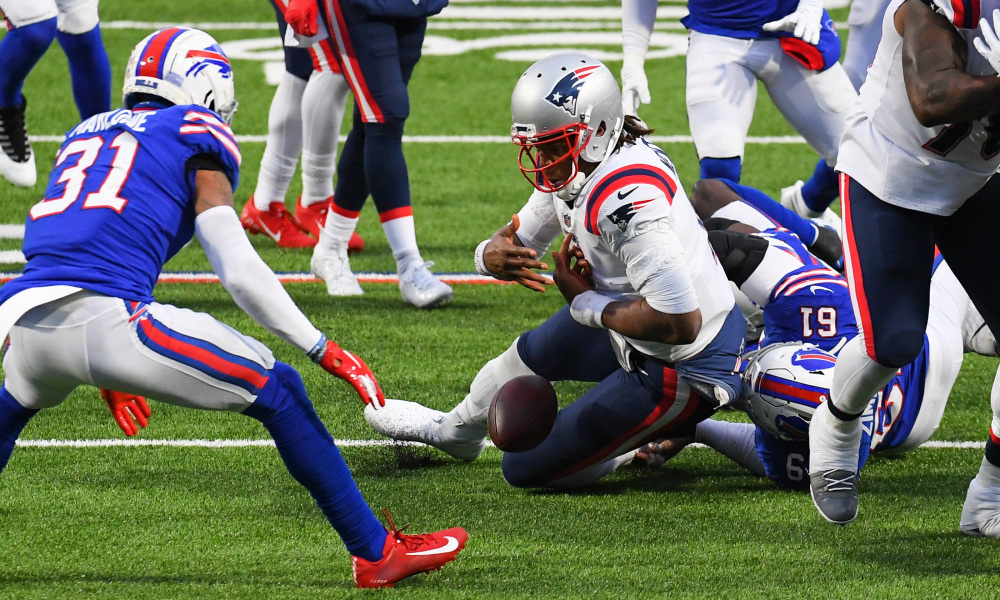 Photo courtesy of patriotswire.usatoday.com.
Cam Newton fumbling away the week 8 game against Buffalo with only 31 seconds remaining. The Patriots were in range to tie the game and head to overtime before Newton fumbled, resulting in the close loss.

The New England Patriots and Buffalo Bills played a close game this past Sunday, with the Bills coming away with their sixth win of the season 24-21. Buffalo now leads the AFC East division with a 6-2 record. The Patriots are now 2-5 and have lost four consecutive games.

Patriots quarterback Cam Newton totaled only 174 passing yards and no touchdown passes on 15 completions. He did add 54 rushing yards and a rushing touchdown to help keep the team close. If there is a silver lining from this loss for New England, it would have to be the emergence of running back Damian Harris. Harris totaled 102 rushing yards and added a touchdown.

New England had the ball with under one-minute remaining and two timeouts to use. They had the ball within field-goal range for kicker Nick Folk when Newton took off for a run. Newton fumbled the ball and Buffalo recovered, sealing the win for the Bills.

New England receiver Jacoby Myers had another standout game this week. He finished the game with six catches for 58 yards. The receiving core of the Patriots has been relatively lackluster this season. Players like Julien Edelman and N’Keal Harry have been nearly invisible all season.

As for Buffalo, their quarterback, Josh Allen, did not have a great day passing. Totaling 154 yards on only 11 completions, while adding an interception. The Bills have had a tough time running the ball this season but were able to run for a total of 190 yards.

For the Patriots, the loss does not look good even with the closeness of the game. They will be without wide receiver Julien Edelman for presumably the next game or two after he had surgery on one of his knees this past week. In their next few games they will face the putrid 0-8 New York Jets next week, followed by reigning league MVP Lamar Jackson and the Baltimore Ravens in week 10.

Last week Cam Newton became just the first QB to surpass 30,000 passing yards and 5,000 rushing yards. It seems he will not be the last to do so, with guys like Jackson, Patrick Mahomes and rookie Justin Herbert in the league.

With the NFL trade deadline only two days away from this game, it seems that the Patriots might be looking to move on from last year’s NFL Defensive Player of the Year award winner Stephon Gilmore. There have been a lot of rumors that he may be on the move, and the fact that he suddenly had a knee injury that kept him from traveling to Buffalo only adds more fuel to the fire. It will be interesting for Patriot fans to watch and see what happens at the deadline.