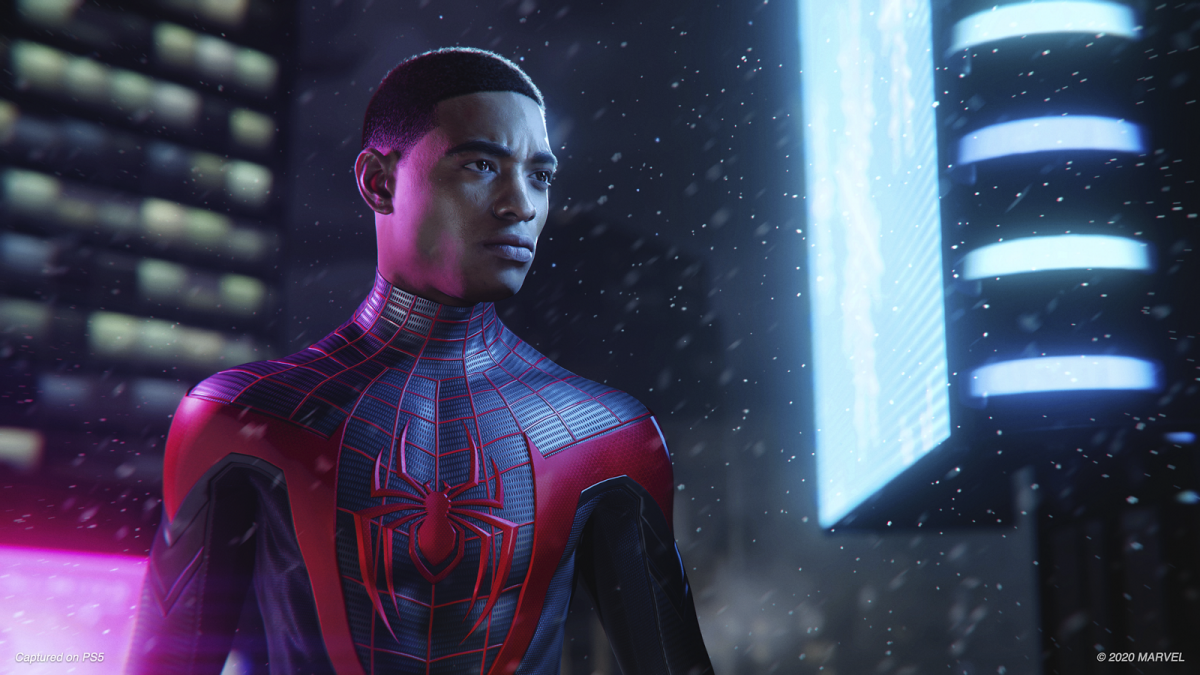 Insomniac Games continues its love letter to Spider-Man in its second game, “Spider-Man: Miles Morales.” Two years after the launch of “Spider-Man,” the game was released on both the PlayStation 4 and PlayStation 5. “Miles Morales” lives up to its predecessor in almost every way, from the swinging and combat mechanics, to the vibrant open world and its captivating original story.

Players are thrown into the gameplay a year after the events of “Spider Man.” Peter Parker tells Miles he is going abroad for work and asks that he looks out for the neighborhood while he is gone. Soon after, conflict arises as a new gang called the Underground – lead by the Tinkerer, a comic book character who has been skillfully reimagined – begins robbing and attacking a new energy company called Roxxon. The company’s CEO, Simon Krieger, is a big tech Elon Musk-type. He claims to have invented a new form of clean energy. With Peter far from home, it is up to Miles to protect New York from the fallout of the fighting.

The story takes advantage of the characters that fans have come to expect in a story involving Miles. It also introduces new characters that help build up the existing characters and flesh out the world. Above all, the game does a good job of staying true to Miles’ character, letting him be his own person and not a Peter Parker clone. From custom swinging and combat animations to how Miles solves puzzles, everything about the character feels personalized and unique without taking away what made the first game so successful.

The previous game was praised for its swinging mechanics and combo-based combat. Insomniac Games knew better to fix what was not broken. Combat and swinging are still as satisfying and enjoyable as before. The only change comes in the form of the exclusion of suit powers. In the previous game, players had been able to use special powers that came with each suit. The powers could be used as players utilize ‘”focus” in battle and could be mixed and matched with suits to create a customized combat experience. Focus is used to charge Miles’ venom power, a bioelectrical defense mechanism, that is used in combat and many of the game’s puzzles.

Given Miles’ venom and cloaking abilities, these powers are what fans have come to expect from the character, so it makes sense that developers would opt out of including the suit powers. From a gameplay standpoint, however, it takes away from some of the combat options and creates a far less customizable experience. Regardless, in the larger scope of the game, this is a small complaint and is one that few players will mind.

Beyond suit powers, “Miles Morales” comes loaded with multiple suit options paying homage to Miles’ comic, TV and movie past. Suits can be customized using suit and visor mods that provide benefits to combat, but most are not all that noticeable in gameplay. The exception being the “Into the Spider-Verse” mods which change Miles’ animations and combat sounds to look like the 2018 movie.

While the game provides numerous side missions and activities, “Miles Morales” is a shorter game than the last. The main storyline can be played through in a few hours by even the most novice player. It is clear that part of the motivation for making this game came from Sony wanting another exclusive to line up with the launch of its new console. Considering how well the last game sold on the PS4, who could really blame them? Besides, how embarrassing would it be to launch a new console without any launch day exclusives?

Despite this, the game does not feel like a money grab. Just as with the last game, the detailed storyline, game design and mechanics make it clear that the team who is working on this game are just as excited about the property as the fans. Any fan of Spider-Man and the previous game are almost guaranteed to enjoy “Spider-Man: Miles Morales.”