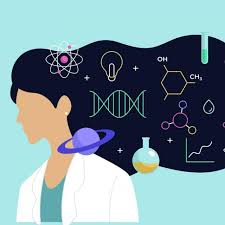 (Photo courtesy of STOCKPHOTO.COM/VECTOR ARTIST) Photo shows a cartoon woman with chemistry symbols, atoms and other science related drawings in her hair.

Over the years, sexism in the fields of science, technology, engineering and mathematics (STEM) has become a more openly known and prevalent issue. As women begin to fill more and more positions in careers previously dominated by men, more issues seem to arise.  The number of women in STEM is growing, but enrollment rates for the majors are still very small.

According to a study done in 2015, there were 601,658 bachelor’s degrees awarded in engineering at 50 colleges across the country.  About 19.9% of those degrees were awarded to women.  The total enrollment average for the study was 78.6% male and 21.4% female.

“The percentage of females in our college of engineering is about 18-19%,” said Kavitha Chandra, the associate dean for undergraduate affairs in engineering. With such low statistics, many may wonder why there are not as many women enrolled in the major.

Some students report feeling awkward about the large disparity in the amount of male and female classmates they have.

“It’s an uncomfortable situation or feeling to be in a class dominated by males,” said Yrvani Joseph, a junior engineering student.

In addition to this, Chandra says that race and socioeconomic status also play a role. According to Professor Chandra,  the attrition rate is much lower for woman.  If women over all are less attracted to these programs, and then why is this idea of sexism in STEM so disputed?

“There is always the notion that you got somewhere because you are a woman,” said Chandra.

Often in these fields, women feel as though they must stay silent about their emotions.  If they do not, it hurts their reputations, or they might be perceived as weak.

“You don’t want to be looked down upon because you’re having a hard time,” said Joseph.  There is this idea that if women speak up about anything they are complaining, and in STEM fields, this is often seen as weakness.

Sexist mentalities are still at large in STEM fields. “My advisor asked me if I was ‘just here to find a husband’.  I do not think that this is a fair question to ask,” said Nyna Pendkar, a junior engineering student.

“There was a time where I was in class and I was saying my opinion on an answer, and they literally looked at me, ignored it, but then said the same exact thing that I said a minute ago.  And I was just like, I literally just said that,” said Joseph. “It was kind of like they acted like I wasn’t there, and I don’t really understand why.”

“There are good people in the engineering department itself that are willing to help people despite gender,” said Joseph. “I genuinely believe that people in this department care.”

“We have to stand up for each other,” said Chandra.  Sexism is an issue that follows many female STEM students well out of college. In any case, the best thing one can do, regardless of gender, is to listen to and support each other.

Thanks to good people, both male and female, the contributions of women in STEM are being recognized and appreciated.

“I think the biggest piece of advice I would give an incoming freshman is to never give up,” said Pendkar.  “I would tell them engineering is challenging and there will be points where you think that this major is not for you. I would tell them to work through it”