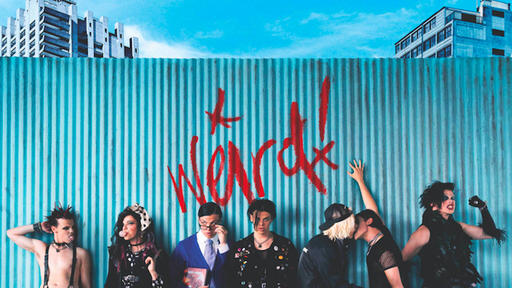 After a pushback from the previously announced release date of November 13, “Weird!” by Yungblud has been released after years in the making. Released on December 4, this album will interest those who are searching for an album with beautiful lyricism and songs that will touch souls.

One standout song from the album is the title track. It was released at the beginning of the year during the beginning stages of quarantine. Reflecting on how strange this entire year has been, Yungblud (also known as Dominic Harrison) gifted his fans with a song to help them get through such hard times.

Another song that was released well before the album’s release, “god save me, but don’t drown me out,” is a song that embraces how people identify themselves and discusses how everyone should be accepted for who they are. Such free-spirited songs take a step back from the regular style of Yungblud’s rock star image.

One thing that runs true throughout the whole album is how much he cares for his fans and the entire Black Hearts Club community that he has created from his music and what it stands for. Yungblud is his own form of soul music, especially for the LGBTQ+ community. His song “mars” is based on a story of a trans girl who brought her parents to one of his concerts to see if they would finally accept her for who she is, and it worked. They finally saw her.

What is even cooler about this album is that Yungblud created seven different personas. The personas are either based on the songs in the album or based on himself, being a pansexual and polyamorous artist. In “superdeadfriends” and “charity,” he creates a character called The Nerd who stands for intelligence and insecurity. In “love song” and “it’s quiet in beverly hills,” the persona of The Girl is shown, and this character stands for emotion and femininity. It is very interactive to show these characters for specific songs because they allow for further connections to be made between fans and music.

The album also features only one collaboration which is “actin’ like that” with Machine Gun Kelly and Travis Barker. This is not the first time Yungblud has collaborated with these two musicians in 2020. Yungblud was featured in the song “body bag” on Kelly’s album, “Tickets to My Downfall,” which Barker helped produce.

This album incorporates a variety of styles, as Yungblud takes inspiration from My Chemical Romance, David Bowie, and The Beastie Boys, amongst others. It is very clear which songs take stylistic references from a specific artist, and it is also clear at what points Yungblud’s own style is mixed in.

This album is one that can be played over and over again. It is an admirable, artistic journey filled with hard work and care. His fans will feel so much pride in this album and all of the work he has done for it.

Each song feels like it was produced in the hopes that it will touch the hearts of people who feel like they are alone. These songs will fill them with hope. This is the best way to close this year in music. “Weird!” is the album that should be on everyone’s radar.