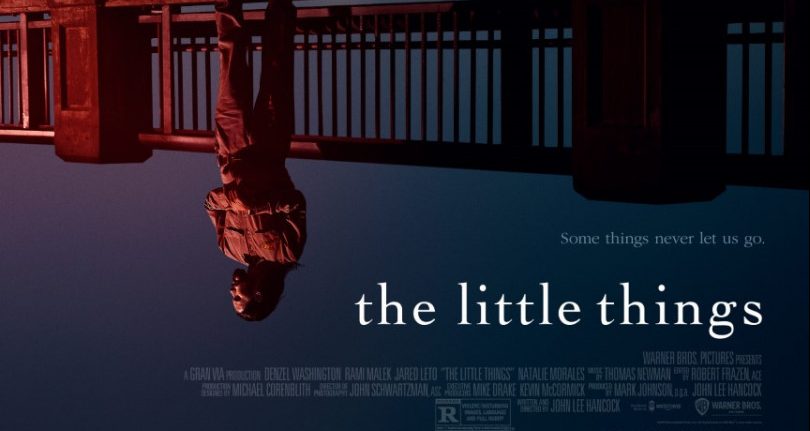 John Lee Hancock, known for his work on films like “The Founder” and “The Blind Side,” wrote and directed “The Little Things.” Released on Jan. 29 on HBO Max and in select theaters, the film follows Deputy Sheriff Joe Deacon and Detective Jimmy Baxter in 1990s Los Angeles as they try to find a serial killer.

Hancock originally wrote the script back in 1993 for Steven Spielberg. At the time, Spielberg passed on the film and the project was shelved until now. “The Little Things” is incredibly disappointing. Even the cast, which includes Denzel Washington, Rami Malek and Jared Leto, could not save the film.

Since 1993, there have been many murder mysteries such as “Seven,”
“L.A. Confidential” and “The Girl with the Dragon Tattoo.” All of these films are significantly better than “The Little Things.” It is not automatically a negative to have a somewhat familiar story, but when that happens, the story needs to be told differently, whether that be from a different perspective or filmed in a unique way. In addition to its many other problems, it seems that the film’s script has not been refined or even touched since the ‘90s, and as a consequence, the film is exhaustingly derivative.

The film has quite a few moments that only worsen the already grueling viewing experience. It attempts to be a serious film, yet it has scenes that are so illogical and poorly thought out that it becomes fairly comedic. The scenes are not necessarily cheesy like one would normally think of when thinking about a script written in the ‘90s. To put it plainly, the scenes are just dumb. The dialogue overall is satisfactory, but in its shining moments of mediocrity, it is shockingly bad for a director who has worked in Hollywood for 30 years.

The characters are also very poorly written and not compelling in the slightest. The performances are not entirely bad, but there was only so much the actors could do with what they were given.

Washington as Joe Deacon gives the best performance amongst the three main actors. His attempt as an aged cop who is tormented by his past is believable. Malek, although quite a talented actor, has nothing to offer in this film. Malek plays Baxter, but his character could have been played by virtually anyone else.

Leto, who plays Albert Sparma, gives the best impression of Niander Wallace, his character from “Blade Runner 2049,” that he could have possibly given. His performance from “Blade Runner” is recycled in Hancock’s film. Everything, from his tone of voice down to his mannerisms, are the same.

Any of the attempts at serious acting from the three leads came off as over-acting, mainly due to the poor script. It is unfortunate because the film had actors of such high caliber to work with. Additionally, since there is not much character development, it is quite difficult to be invested in the film.

The pacing in this film is horrendous. There is nothing wrong with having a slow-paced film, as it gives the audience more time to think about the characters and everything going on, but when the film’s characters lack quality and nothing happens, the slow pacing is more of a negative than a positive.

The editing throughout the film is inconsistent at best. In some scenes, the editing is acceptable. In other scenes, there are dozens of cuts in a minute. There is no continuity editing in the film, which is incredibly distracting.

The film’s score was composed by seasoned film score composer, Thomas Newman. It is adequate. In some instances, it helps create a feeling of suspense, but in most cases, the music is either underutilized or misused.

All in all, if this film’s script had gone through a few more drafts and there was more attention given to it during production, it could have been at the very least a watchable film. As it stands, the film is unwatchable.