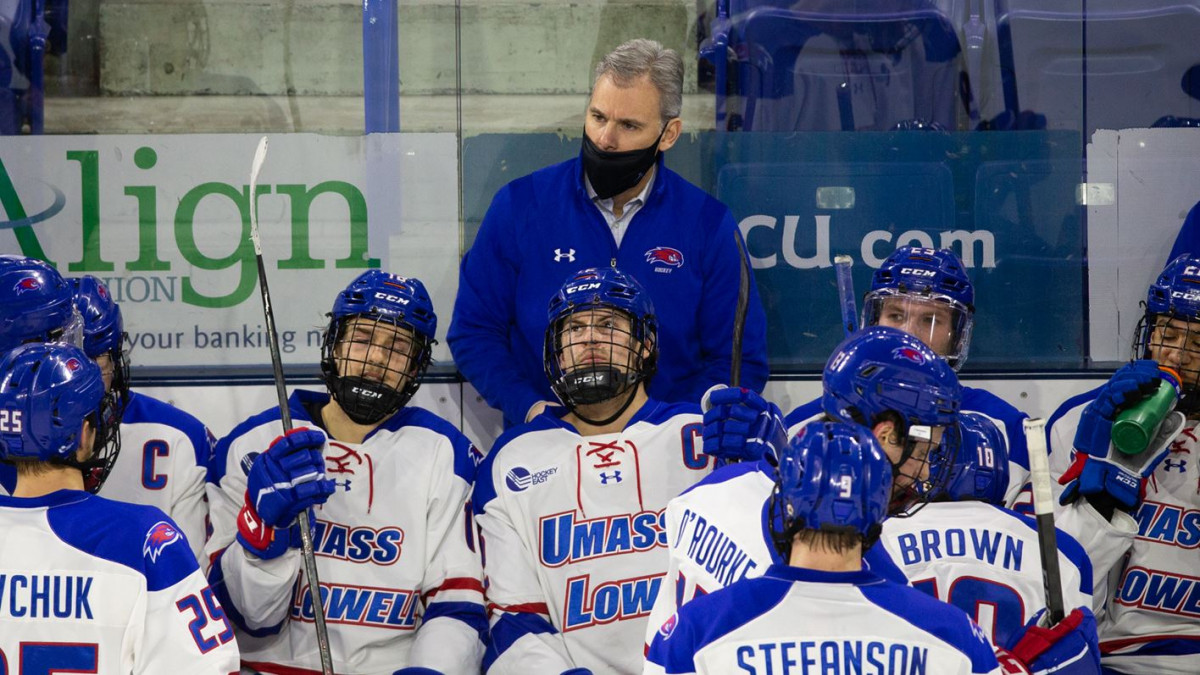 The UMass Lowell River Hawks have a record of 4-5. The team is placed seventh out of eleven teams in their division, the Hockey East. The River Hawks just ended a four-game losing streak after a 3-2 overtime victory to UConn’s Huskies on Feb. 9. The previous four games were losses to UMass Amherst’s Minutemen and UNH’s Wildcats.

Sophomore Andre Lee scored the winning goal for the River Hawks in overtime in their latest battle. The team was up by one goal after River Hawks’ freshman goalie Henry Welsch made a big stop on a power-play attack in the third. The Huskies soon tied the game at 2-2, but Lee was able to break it. Brian Chambers and Reid Stefanson scored Lowell’s other two goals in the first and second periods.

The game with the Wildcats last Friday resulted in a tough 2-1 defeat. Going back to previous seasons, eight of the last nine games against the Wildcats have been decided by just one goal. During last Friday’s game, the single goal was scored by senior captain Charlie Levesque.

Their latest game with the Wildcats, however, ended in overtime with a score of 7-6. The River Hawks were up by three goals in the third period, but the Wildcats were able to rally and eventually win. The winning goal was scored by Angus Crookshank, who had a total of four goals in the game.

The River Hawks have had around a dozen postponed games this season due to the coronavirus pandemic. On January 19, Hockey East announced that they would be discarding the division’s initial schedule and that games would be scheduled on a weekly basis. Due to this change, the team does not have a complete schedule set in stone, but they are scheduled to play Boston College in back-to-back games on Feb. 12 and Feb. 13. With a record of 11-3-1, Boston College is currently in first place in the Hockey East.

These postponements have caused the team to play less games than other teams in their division. As a comparison, the Minutemen, who are currently in third place in the Hockey East, have a record of 11-5, with double of the number of games played than the River Hawks.

On a more positive note, UML’s Welsch is currently a prospect for the Mike Richter Award. The award is given annually to the most outstanding goalie in all of NCAA Hockey. Skills on the ice, academic performance and community outreach are all considered when presenting a player with this award. There are thirty-five candidates for the award, and the winner will be decided in April during the NCAA Frozen Four.

In addition, junior defenseman Chase Blackmun was named Hockey East Player of the Week back in early January. The accolade came after outstanding performances in back-to-back wins against the Maine Black Bears, where Blackmun scored three goals and one assist.

These positives aside, the team’s losses have been tough. Head coach Norm Bazin said, “The Hockey East is very difficult, and we proved that again tonight where a team came in here and stole points on our home ice, so we’re going to have to be better in several areas.”

River Hawk fans are hoping that the team can end their losing streak and work their way up in the standings during this unorthodox season. Sophomore forward Carl Berglund currently leads the team in points, with three goals and seven assists.