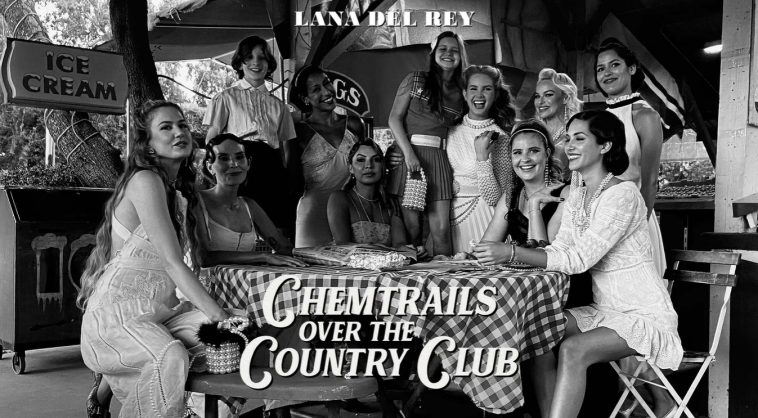 (Photo Courtesy of  Universal Music) “Chemtrails Over the Country Club” was originally pitched as a spoken word album before its official release.

Lana Del Rey is back with another album after a couple of years where she seemed to have been a singer of the past. “Chemtrails Over the Country Club” embraces that sound that fans are very familiar with. It shows an image of Del Rey that fans are used to, as well as shows a new side to her.

The first song, “White Dress,” is a wispy, beautiful ballad. The negative side to this song is that parts of the chorus are too pitchy, almost like she is straining her voice to get it at a pitch that should be calm-toned like the typical tone that Del Rey sings in.

However, one cannot deny that she has a beautiful voice, and it fills that “cottagecore” aesthetic with its sense of freedom and summertime. It is like her music is the wind that runs through someone’s hair. It is breathy and sounds like a sigh of frustration as she sings about being 19 and working as a waitress in a tight, white dress while dealing with male suppression.

“Chemtrails Over the Country Trail” is another song that has a unique title and style. It carries the same breathy, atmospheric tone that “White Dress” has, but we get to hear Del Rey’s voice more clearly, and it sounds almost like a lullaby as it describes sisterhood and youth. It is an adventurous song with light wind instruments and piano.

The second half of the song, where her voice overlaps and echoes, sounds like a fever dream. The beat changes to drums and sounds like someone is running through the forest and acting “strange and wild.”

“Let Me Love You Like A Woman” is very emotional. It sounds desperate, like she is begging for the subject of the song to listen. It is not the strongest song in the album, but it is the first song that came out prior to the album’s release. It has the same vibe as the previous songs, but it  is very simplistic in comparison.

“Wild at Heart” starts off with a soft guitar and sounds like a country song that is played on a porch at sunset. As the song progresses, so does the strumming of the guitar and the inclusion of more instruments. This song really grabs the listener’s attention as she sings about being wild and being loved for being different and not for fame. This is one of the most powerful and heartfelt songs of the entire album.

“Dark But Just a Game” has a nice beat that one can bop their head to. Del Rey continues on the topic of fame and how dark it is, but she says it is all just a game. This is a very fresh take on music from her. If one of the songs from this album were to fit in the era of modern music, this one has the potential to play on radio stations while still feeling true to Del Rey’s image and artistry. It is empowering to hear her sing about how she will remain the same amidst the darkness of fame.

“Dance Till We Die” is like a lyrical story. In the original announcement of this album, it was said that it would be a spoken word album. This song is the first one that fits that description. It picks up the pace once a jazz-style beat appears in the bridge. It is a very interesting choice, one that seemed to be the most impactful moment because it teases a style of music that is very different from Del Rey’s typical image.

This album, overall, embraces the genre of folk music and stays very natural and adventurous throughout. It is great to see Del Rey making a comeback after a few years of not producing much new music. It has been about two years since her last album, “Norman F**king Rockwell!” was released.

This album does not bring anything new to the music world, but for Del Rey’s devoted fans, this is an album that comes from the heart. Her voice is so angelic, and the choice of instruments support her voice with hardly any faults. For anyone that needs a soundtrack for a road trip or a warm summer’s day, this is a perfect suggestion.

There is something very nostalgic and childlike about this album that is very rare in music. Del Rey is an artist of the early 2000s, so it comes to no surprise that “Chemtrails Over the Country Club” would bring back old fans and even wrangle in new ones.