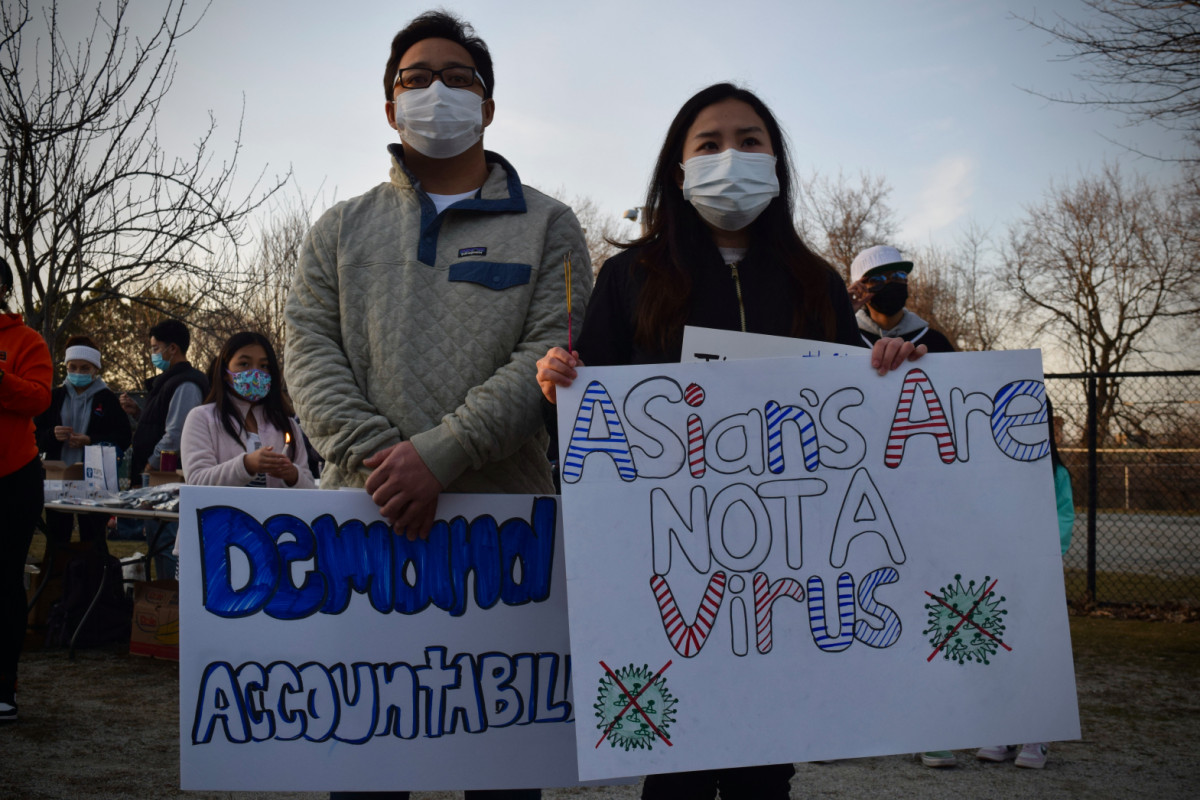 (Robert Mill/ Lowell Sun) Kevin Chan and Mai Nagabayashi, both of Lowell, hold signs during a vigil against Asian hate held in Clemente Park in Lowell’s Cambodiatown neighborhood on March 17.

Since the start of the COVID-19 pandemic, there has been a marked increase in anti-Asian racism. According to Stop AAPI Hate, a nonprofit dedicated to tracking and responding to hate towards Asian American Pacific Islander (AAPI) communities, from March 19 to Feb. 28, 2021, there were 3,795 incidents received by the Stop AAPI Hate reporting center. A number which, they say, represents only a fraction of incidents that have occurred.

Of those 3,795 incidents, physical assault comprised the third-largest category of the total incidents at 11.1%. The March 16 shooting in Atlanta that killed eight, six of whom were of Asian descent and seven of whom were women, and the recent attack of a 65-year-old Filipino woman in New York are just a few of those.

Phitsamay Uy, the co-director of the Center for Asian American Studies (CAAS) and the Graduate Coordinator for Ph.D. Programs in UMass Lowell’s College of Education, says, “At the Atlanta shooting, I want people to understand that that’s an additional layer of oppression. There’s racism and then there’s sexism, but then with the Atlanta shooting, there’s that new layer of misogyny since he specifically targeted Asian women.”

Uy says that misogyny is the “hatred and contempt” of women. An example she gives is that a sexist might believe that women should make less than men, but a misogynist would say women do not deserve to be paid at all.

“I think that’s a nuance that I don’t think people understand. A lot of the violence that has happened, the majority of them have been with women. And so that’s why right now, Asian American women have had a heightened sense of fear,” Uy says.

Stop AAPI Hate says that women report hate incidents 2.3 times more than men. Uy says the history of misogyny is long. It dates as far back as Ancient Greece.

Sue Kim, the co-director of CAAS and an associate dean in the College of Fine Arts, Humanities and Social Sciences, says misogyny aimed at Asian women and sex workers, in particular, is closely related to the Cold War and colonialism, where military bases in other countries were located near sex workers. Like misogyny, anti-Asian racism also has a long history in the U.S.

“We have to understand [anti-Asian racism] as part of a larger sort of history, and a larger system,” Kim says. “When something like this happens, we really want to just say ‘Oh, it’s just that it’s just one crazy person, right?’”

Kim says that anti-Asian racism has a history that goes back centuries, long before there were even Asian bodies living in the West. Voyagers and diplomats created writings and drawings of the East, and these images created a conception of Asians as subhuman.

“[Anti-Asian racism] is not only long-standing, but in the United States, it’s actually fundamental to how we think about race, immigration, nationality and citizenship,” Kim says.

For example, there is the 1882 Chinese Exclusion Act, which defined who could immigrate or who could be a citizen in the U.S. It was one of the first laws that prohibited people from immigrating based on race, and Kim says it created the notion of undocumented immigrants.

This is just one example of how history, policies and legislation policing Asian immigrants and bodies impacted the broader conversations that surround race and immigration today.

“When we talk about race in this country, it tends to get stalled because people are only thinking of one thing,” Kim says. “They’re only thinking of racism as calling someone a name or shooting them with a gun, when it’s just a lot more complicated and embedded throughout everything than that.”

She says that is called interpersonal racism, which includes things like microaggressions, racial stereotypes, slurs and physical violence.

Another form of racism, one that has garnered more attention in recent years due to movements like Black Lives Matter, is structural (or systemic) racism. These are deep-rooted ideas in our systems and structures that impact how we think and operate in a way that gives certain groups an advantage while putting others at a disadvantage.

“Any kind of racism is not great,” Kim says, “but I think the second one is, in some ways, more difficult to address because it’s so deeply embedded in our society.”

Systemic racism manifests in numerous ways, such as through generational wealth, the lack of Eastern history and literature being taught in school, who gets access to healthcare and more. One part of anti-Asian racism which has been talked about a lot in the last few weeks is the Model Minority Myth.

Kim says that the Model Minority Myth perpetuates the stereotypes that because of an Asian person’s culture or background, they do well financially, they are more educated and they do not have trouble socially. It also asserts that Asian people do not speak out and are well behaved.

The myth, Kim says, neglects the individuality of Asian American cultures and the socio-economic backgrounds of different nationalities and individuals.

Additionally, Kim says the myth overlooks that, historically, Asian Americans have always fought back. She points to the history of plantations in Hawaii, corporate farms in California and even the foundation of ethnic studies in the 1960s.

“The Model Minority Myth, and we call it a myth, is a way to kind of flatten these differences – you know, dehumanize. But it is also really a way to kind of divide and conquer, particularly divide people of color against each other,” Kim says.

The same method was used to maintain power over groups by creating tension throughout the history of colonialism.

Kim compares white supremacy to the patriarchy, an ideology in which men have more power over women. Women, like mothers and peers, can pass on patriarchal ideas to other women, enforcing the system without necessarily meaning to. Kim points to conversations surrounding body image.

“If we think of patriarchy as an ideology, then that means that it’s not necessarily tied to bodies,” she says. “That means that anyone can participate in it, but anyone can also fight it. We can do things to dismantle it. White supremacy works the same way.”

Kim says change starts with people being open to learning and changing through the Lifelong Learning Model, the practice people are open to learning and changing throughout their lives. She says that this is true for many things. For instance, she says that with the help of students, she is constantly learning more about gender identity and avoiding ableism.