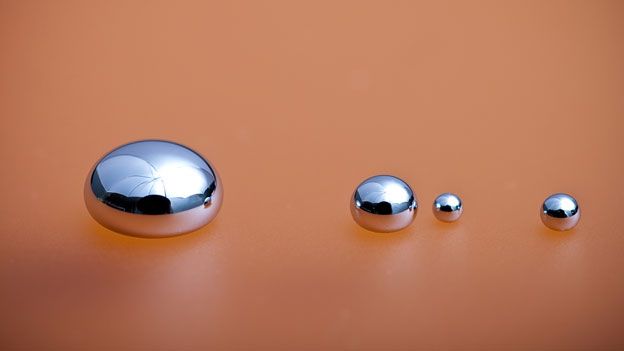 (Photo courtesy of BBC.com) A photo of mercury in its liquid form.

Fifty to a hundred years ago mercury became more present in our atmosphere through the rise of industrial jobs. The chemical element is everywhere now since it can pollute local areas and travel across continents. Mercury can stay in the air for around one to two years, and that adds on to the issue of air pollution.

Eric Roy and Ting Wang are UMass Lowell students who are conducting research on mercury and its impact on the atmosphere in Howland Forest with their professor Dr. Daniel Obrist. The study area is in northern Maine and they aim to get a grasp on how present mercury is in forests.

Mercury is a chemical element that can be produced naturally or through human activities. According to the United States Environmental Protection Agency, the burning of fossil fuels, waste, and coal can release mercury. Although the burning of fuels creates energy, the mercury goes into the air. Once mercury is spread throughout the atmosphere, it can mix with dust, snow, or rain. Power plants are a significant source of mercury, through burning fuels, in the United States.

Rock produces mercury naturally, yet it is also likely to end up in water. When mercury gets into the water it presents a challenge. It can contaminate our water supply, but also affect certain foods that we eat. When mercury occupies oceans and goes into watersheds, it is more likely that food like fish and tuna will contain it.

When Roy started attending UMass Lowell, he was given the opportunity to work with a professor in a lab through the immersive scholar program. Roy happened to be in one of Dr. Obrist’s classes during his first semester, and towards the end of it, Dr. Obrist asked Roy to work on the mercury project with him.

Wang completed her undergraduate degree in China and came to the United States for her master’s degree. She contacted Dr. Obrist after reading some of his work on mercury in the artic.

“Learning more about dynamics pertaining to mercury contamination would allow us to further our knowledge on ecosystems, and that would help us deal with mercury pollution in the future,” Wang said.

One form of human activity that they found concerning is artisanal goldmining. People can create gold with mercury if they find things that may contain gold in it, but the activity is dangerous.

“You have gold, but at the same time you are breathing in a lot of toxic mercury that can get into the atmosphere. The situation is difficult because some people make money off artisanal goldmining, yet the activity is harmful for them and others, which is quite a paradox,” Roy said.

Certain products like button cell batteries and compact fluorescent light bulbs contain mercury. Roy and Wang urged people to be more conscious of the things they throw away in the trash.

Wang suggested that people take advantage of alternatives to mercury use, “Using more renewable energy would decrease the use of power plants and produce less mercury emission.”

Throughout Roy and Wang’s mercury research experience, they have encountered difficulties.

Cleaning instruments, preparing for tests, and checking systems are examples of major tasks Roy and Wang must tend to. Roy and Wang must analyze the data, compare and find relevant information along with other researchers peer-reviewing their work.

“We submit our work and other people in our field look at it to produce suggestions or reject it. If we receive feedback, we make revisions and hopefully get it published in a few months. …. It can be a lengthy process,” Roy said.

Researching mercury and its impact on the environment has been rewarding for Roy and Wang. They hope to publish their material on mercury soon.