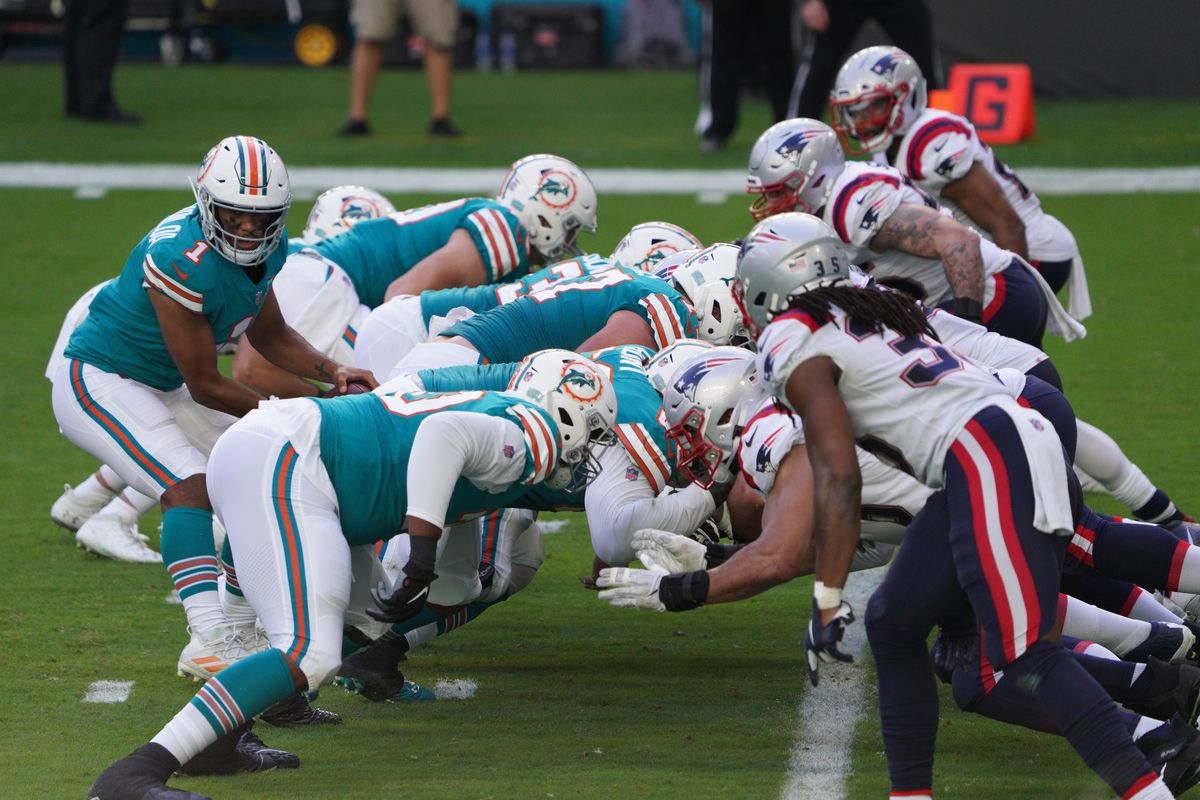 Mac Jones and the New England Patriots lost their 2021 season opener at Gillette Stadium to the Miami Dolphins with a final score of 17-16. The game featured a showdown between two former University of Alabama quarterbacks in Jones, and in the Dolphin’s Tua Tagovailoa. This was Jones’ NFL Debut and he put together a very promising stat line with a 29/39 in passing attempts, 281 total passing yards and delivered his first touchdown pass in the NFL. It was a back and forth bout throughout the course of the game, but ultimately an untimely fumble by New England’s Damien Harris would seal the deal for the Dolphins.

Despite the loss, there still is a lot to appreciate and be excited about when reviewing the Patriots’ performance on Sunday. Jones worked hard during the offseason and proved to Bill Belichick that he can effectively manage the team’s offense. It did not take long for Jones’ confidence to build as he seemed comfortable standing in the pocket and absorbing hits to make plays. Early in the first quarter, the pocket collapsed around Jones and he was still able to get a 4-yard pass off to running back James White.

Nelson Agholor, who was signed as an unrestricted free agent from the Las Vegas Raiders, seems to have a lot of faith in Jones’ ability, and vice versa. Agholor finished the game, ranked 1st for New England’s receiving core and collected a 7-yard pass for a touchdown. He would total 72-yards for the day off of 5 receptions; this included a 25-yard catch coming in the second quarter, which led to the team’s first touchdown of the game.

Tagovailoa’s game featured a 3-yard touchdown pass to tight-end Jaylen Waddle accompanied by a 3-yard rushing touchdown from Tagovailoa. Despite the pair of touchdowns, Tagovailoa did throw one interception which came at a critical point late in the fourth quarter. His pass was intended for Albert Wilson but was intercepted by rookie cornerback Jonathan Jones.

The interception of Tagovailoa was a defining moment for the game as the Patriots’ defensive line put the Dolphin’s quarterback under pressure and forced him to make a rushed pass while on the run. This came with 8:07 left to go in the game and the Patriots down 17-16. Jones marched the Patriots down the field, and they eventually had themselves well within scoring distance at the Dolphin’s 9-yard line. The ball was given to Damien Harris, who was having himself a good game with 23 carries for 100 yards, and had the ball stripped away.

Although this game marks Belichick’s first loss when coaching a rookie quarterback in their debut game, it is hard to really consider this a loss. Jones proved he can run the offense and finished the game with a 102 rating. In addition, he stood up for his running back Harris when reporters made the claim that it was his fault for the loss.

Mac Jones was not the only rookie quarterback getting their first look at the NFL in week one. He was joined by Trevor Lawrence of the Jacksonville Jaguars and Zach Wilson of the New York Jets.

Lawrence and the Jaguars dropped a 37-21 loss to the Houston Texans on Sunday. The rookie quarterback threw for 300 plus yards and three touchdowns, but at the cost of three interceptions. Wilson and the Jets also lost to the Carolina Panthers. Wilson went 20/37 on his passing attempts, threw for 258-yards, had two passing touchdowns and had one interception. He had a rough start in the first half but turned it around in the second.

Jones and Wilson will get the chance to go head-to-head Sunday, as the Patriots will be visiting the Jets. The Jets will need to emphasize protecting their quarterback as they allowed six sacks against the Panthers in the previous week. The Patriots will hope to build off their quarterback’s performance from last week and find success behind Belichick’s’ 22-8 record against rookie quarterbacks.