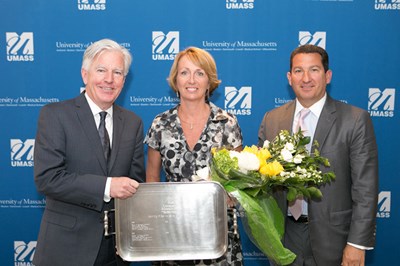 High school sweethearts utilized their studies at UMass Lowell to launch successful careers and give back to the school who taught them. (Courtesy of: UMass Lowell)

As one of their most recent acts of generosity to the higher education system, Robert and Donna Manning have begun distributing their donation of $50 million to the University of Massachusetts. The gift is the largest cash donation ever gifted to the UMass institution and, as a reflection of Mr. and Mrs. Manning’s dedication to the student population and the Commonwealth, will improve students’ opportunities for learning and experience on all five campuses.

UMass President Marty Meehan spoke on the impact of the Mannings’ generosity in the UMass Office of Communication’s press release: “The significance of this gift cannot be overstated. Rob and Donna are two of our own. As first-generation college graduates, they experienced the transformational impact UMass has on students’ lives. Rob and Donna have always led by example in their philanthropy, and this remarkable gift is a call to action to the philanthropic community.”

The Swampscott couple grew up in Methuen and attended UMass Lowell together in the 1980s. Robert Manning graduated from the university with an information systems management degree in 1984, and he earned the positions of president, CEO and chair (consecutively) at MFS Investment Management after working as a research analyst for the company’s High Yield Bond Group. Currently, he is a dedicated chair of the UMass Board of Trustees and plans to retire this year from MFS.

After earning her nursing degree in 1985 and a master’s in business administration in 1991, Donna Manning dedicated the following 35 years as an oncology nurse at the Boston Medical Center before retiring in 2018.

The plan for the first $15 million distribution out of the $50 million, which was announced by the university on the first of September, suits Mrs. Manning’s observation regarding the lack of diversity among nurses in the healthcare field. The gift will provide support for the diversity of student nurses as well as the advancement of education in UMass Boston’s nursing program. In turn, the program will be renamed the Robert and Donna Manning College of Nursing and Health Sciences.

The positive impact that the gift will have on the UMass Boston campus and community is especially important during the COVID-19 pandemic. Among other injurious effects of the pandemic on one’s financial and physical wellbeing, medical centers are struggling with the continuously incoming COVID cases while handling a nursing shortage.

In a letter to the campus community on the day of the first distribution, UMass Boston Chancellor Marcelo Suárez-Orozco said, “Amidst a pandemic, rampant medical disinformation, nursing shortages, and the heroism of healthcare workers, we are more committed than ever to cultivating extraordinary nursing talent. We work every day to instill in our students not only health and wellness expertise, but humanity, empathy, and cultural awareness — caregiving in its truest sense.”

Strengthening the diversity, knowledge and magnitude of the nursing workforce is a priority even without the present pandemic. Mrs. Manning said in the UMass Office of Communication’s press release, “diversity in the nursing workforce can improve patient care and address health inequities. We look forward to actively working with the college on these important goals.”

Previously, the Mannings generously donated over $11 million to the university amongst other considerate gifts specifically for the UMass Lowell campus, such as financially supporting several faculty chairs, a nursing simulation lab and the Robert and Donna Manning Endowed Scholarship Fund. The Mannings also demonstrated their support for UMass professors in 2016 by creating the Manning Prize. Since then, the prize has recognized the excellence of 30 faculty members and awarded each honoree with a $10,000 award.

The naming of the Manning School of Business, which is situated in the Pulichino Tong Business Center on the UMass Lowell campus, occurred in respect of the Mannings’ previous donations.

As for the remaining $35 million of the $50 million, the couple will distribute the donation to the other UMass campuses within the upcoming months. The Mannings’ goal as UMass Lowell alumni: to give students a hand in creating a better future for the Commonwealth.