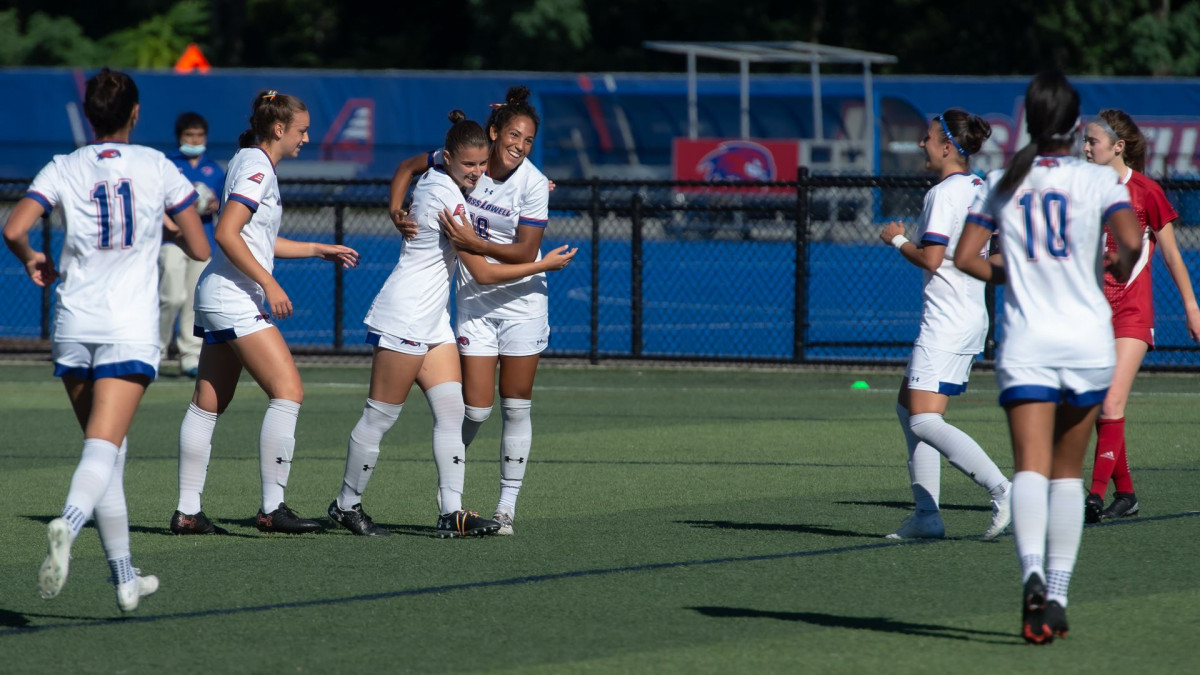 (Photo courtesy of UMass Lowell) The River Hawks celebrate after a victory against NJIT on September 19th, 2021

The UMass Lowell Women’s soccer team has found moderate success so far this season being eight games in with a record of 4-3-1. This comes after a season that was moved from last fall to last spring due to the COVID-19 pandemic. Last season, the River Hawks were coined the America East regular-season champions for the first time in team history. Moving to this season, eight newcomers were added to the team roster.

The River Hawks got their first win of the season in their first game on Aug. 19, against the Holy Cross Crusaders. The final score of the game was 2-0 with goals for Lowell from Papatheodorou and Anna Edson both in the first half.

This was Papatheodorou’s first point as a River Hawk. On the game, head coach Mira Novak said, “At this early point of the season everyone is fresh, so it was physically a very challenging game. I’m really happy for the team and the work they put in, along with their high-level ability to compete.”

Following their first game of the season, Lowell faced off against Boston University as visitors in a game that ended in a draw at 1-1. In the first half, BU outshot Lowell seven to five with BU scoring on one of their chances. Papatheodorou scored the River Hawks’ lone goal early in the game’s second half. This marked her second goal of the season. The game went into extra minutes, however, neither team was able to capitalize on their chances and the match ended in a tie.

Skipping ahead, the River Hawks came up on top against Northeastern on Sept. 5, in another game that went into overtime. Junior captain Emily Nelson scored the overtime goal that gave Lowell the win. This victory pushed Lowell’s record to 2-2-1.

In the River Hawks’ most recent game, they were able to defeat NJIT with a score of 2-1. All of the goals in this game came within a three-minute span in the second half. Also, Lowell was able to outshoot NJIT 13 shots to four clearly helping them secure the win. This was the first game this season between teams in the America East division.

Commenting on their most recent game, Novak stated, “Overall, I’m happy with the result. Going forward, there are bigger challenges waiting for us with Binghamton next week. We have a full week to get ready and fix some things we saw on the field today.”

As stated above, the River Hawks’ next game will be at home against Binghamton on Sunday, Sept. 26,at 3:30 p.m. Following that game, they will face the University of New Hampshire as the visitors on Thursday, Sept. 30, at 6 p.m.