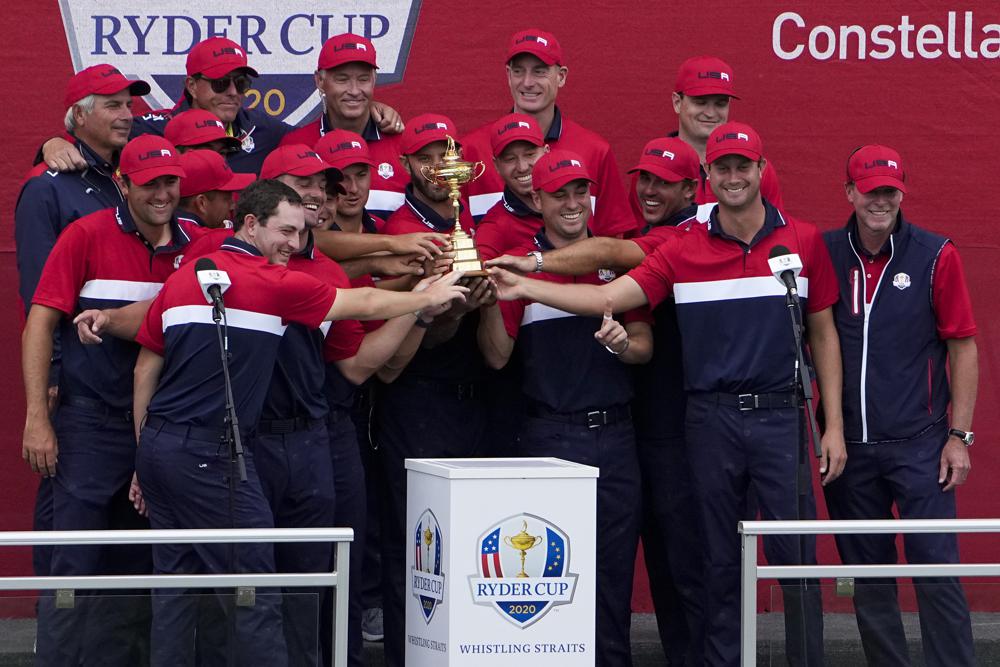 (Photo courtesy of apnews.com) All 12 players of the victorious U.S. team hoist the Ryder Cup

A young U.S. team defeated Europe in the biannual Ryder Cup this past Sunday with historic margins. Six of the U.S. players were rookies who all contributed to the dominating victory. Combined, they scored more points than all of Europe. For nine of the U.S. players, this was their first time winning a Ryder Cup. The Cup took place in the scenic 36-hole Whistling Straits course in Wisconsin. Golfers competed from Sept. 24 to Sept. 26.

The team selection for the Ryder Cup varies between the U.S. and European team. For the U.S. team, the top six golfers in points are selected along with six golfers who the team captain chooses. This year, golf veteran Steve Stricker was the U.S. team captain. For Europe, the process of team selection is similar but not exactly the same. The top four golfers from the European Points List are chosen along with the top five players from the World’s Point List, leaving three golfers to be selected by the team captain. The 2021 European team captain was Padraig Harrington.

This iteration of the Ryder Cup was scheduled to be played in July 2020. However, the tournament was postponed to September 2021 due to the COVID-19 pandemic. This was the second time the Ryder Cup has been postponed, as it was in 2001 due to the 9/11 attacks on U.S. soil.

The Ryder Cup format is split up into foursome and single matches with each contributing to the team’s final scores. In foursome matches, two players from each team play against each other with the team that has the lowest combined score on each hole winning points. There are 28 total matches in each Ryder Cup. The final score this year was the U.S. team winning 19-9.

American golfer Scottie Scheffler went up against the top golfer in the world, European Jon Rham, and came up on top with a 4-3 hole victory. On top of that, U.S. team member Collin Morikawa delivered the final blow with a 3-foot birdie putt that gave the U.S. team the points they needed to win.

“It means so much. To clinch this and bring the cup back to home soil, it feels so good,” Morikawa said after scoring the winning points. “The guys pulled through. We didn’t let up, and looking at the leaderboard, hopefully we can keep going and hit the 18.5 or get past that. I don’t think this is just a win. It’s a dominant win. Everyone showed up. All 12 of us. When we’re called upon, we show up.”

The next Ryder Cup will be held in Italy in the fall of 2023. Hopefully for fans, the young U.S. team can repeat their success from this year’s cup.