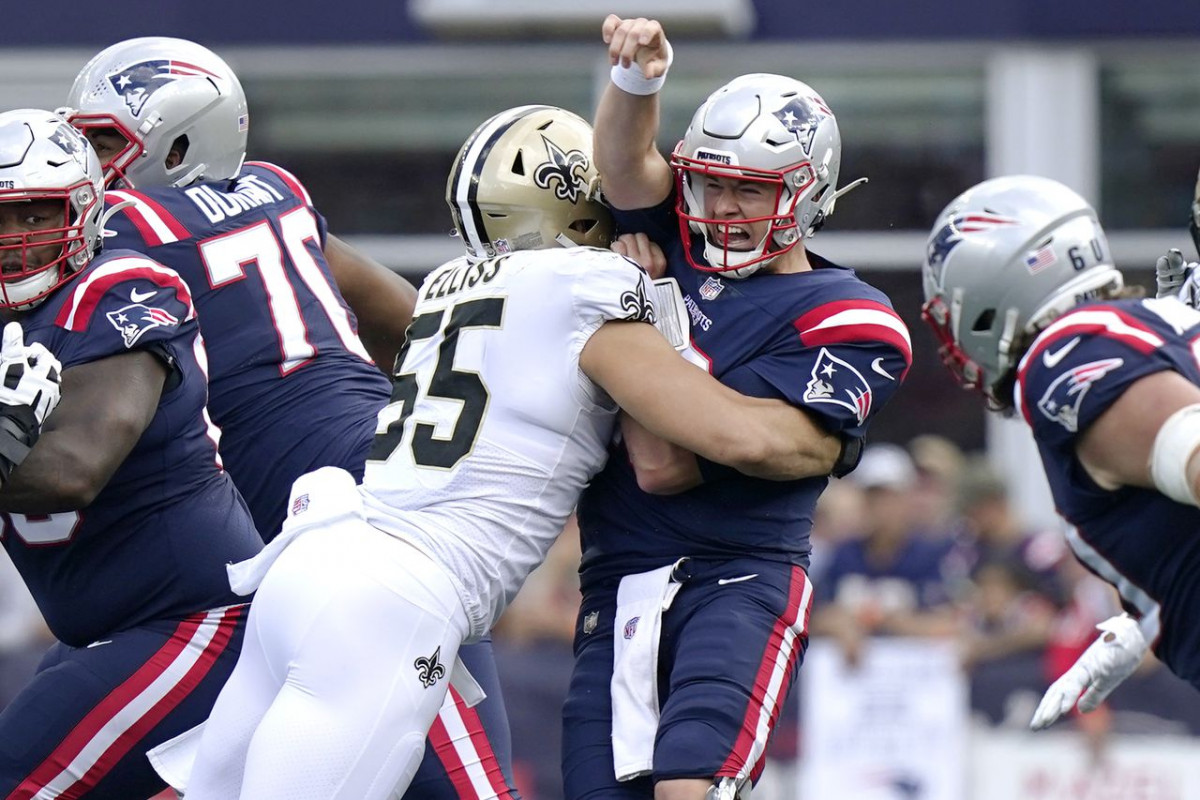 (Photo courtesy of MassLive.com) Patriots’ quarterback Mac Jones gets taken down by a New Orleans defender

The Patriots hosted the Saints in week three of the NFL season and lost decisively 28-13. This game comes before Brady’s return to Foxborough, Massachusetts in week four with his championship winning Tampa Bay Buccaneers team.

New England is now 0-2 at home on the season for the first time since 2000. They currently have a record of 1-2 putting them at third place in the AFC East.

Patriots’ rookie quarterback Mac Jones was hoping to continue the team’s success after defeating the New York Jets the week before, 25-6. However, Jones found himself continuously under pressure and threw three interceptions by the end of the game. Also, Jones was sacked three times and hit 11 times by the strong New Orleans defense.

Despite this, Jones had a decent performance completing 30 out of 51 passing attempts and scoring a touchdown. The touchdown was a 22-yard pass to first-year Patriots’ receiver, Kendrick Bourne, in the game’s fourth quarter.

New Orleans started Jameis Winston as quarterback since their long-time elite quarterback, Drew Brees, retired after last season. Winston threw two touchdown passes in their win against New England. On top of this, Saints’ safety Malcom Jenkins returned an interception for a touchdown adding to their four touchdowns on the day.

During the game’s halftime, the Patriots honored long-time wide-receiver, Julian Edelman, who won three Super Bowls with the team. Edelman announced his retirement last April after spending 11 years in the league. Edelman teared up during the ceremony at which Patriots owner, Robert Kraft, gave a wholehearted speech.

Edelman also gave a speech of his own saying, “You guys have taken me and my family, and you brought us into your homes, and you welcomed us,” he said. “We love you guys. Foxboro forever.”

This season’s week three had two plays, one by the Ravens and one by the Jaguars, that will likely be remembered for a long time. The Baltimore Ravens’ kicker, Justin Tucker, set the league record for the longest field-goal ever made, a distance of 66 yards.

This field goal won the game for the Ravens who were up against the Detroit Lions, with a final score of 19-17. The ball dramatically hit the lower crossbar of the goal post where it bounced and went through the uprights.

For the Jaguars, Jamal Agnew tied the NFL record for the longest play ever after returning a missed field-goal for a touchdown running 109 yards. Despite this, the Jaguars lost the game to the Arizona Cardinals 31-19.

All eyes will be on Foxborough next Sunday night when the Patriots face off at home against Brady’s Tampa Bay Buccaneers. This will be Brady’s first time playing in New England since leaving the team two off seasons ago.

The Buccaneers are favorites to win the game as an aging Brady is showing no signs of slowing down. This Brady versus Belichick matchup is definitely one all NFL fans will not want to miss.