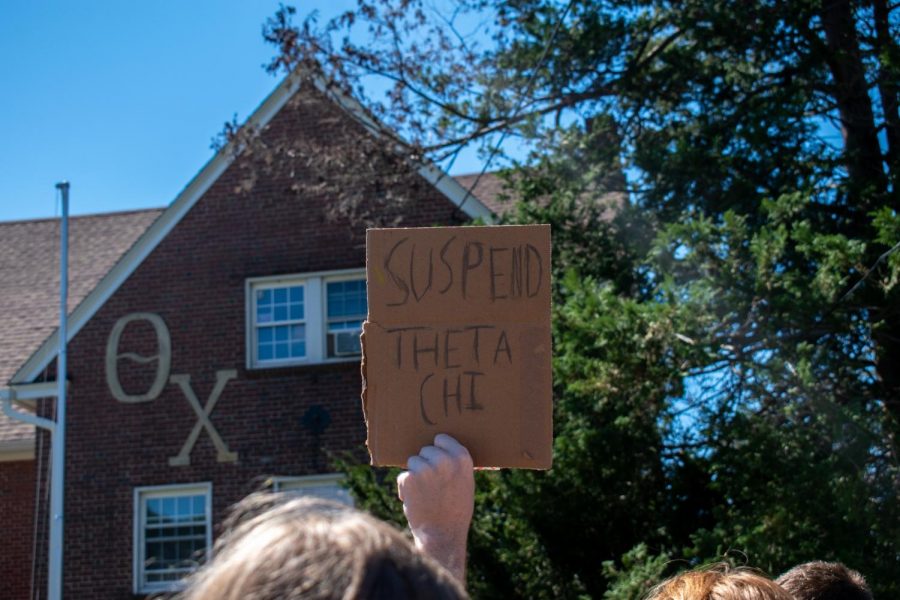 Recent sexual assault allegations against the Theta Chi fraternity brothers led to protests outside their house at UMass Amherst. The most recent report was anonymous and said to have happened at a party on Saturday, Sept. 18.

There is not much information currently on the allegation.

Around 300 people showed up outside the Theta Chi house the following day, Sept. 19, to protest after hearing about negative anonymous experiences with the fraternity through the app YikYak. Most students claimed that they heard about the protest through YikYak, Reddit and word of mouth.

The plan for protesters was to start at the Theta Chi house and end at the Zeta Beta Tau house. The students of UMass Amherst were protesting behavior from both fraternities.

One of the main chants heard from protestors was, “there’s no place for rapists at UMass.” While chanting, protestors lowered the flag outside the Theta Chi house and replaced it with a sign that read, “How to prevent rape: 1. Don’t rape. 2. See above.”

Brothers of Theta Chi were seen leaving the house, mocking, recording protestors and throwing cans from their vehicles. Soon after, brothers inside the house called police to stop the protest.

The police disbanded the protest around 1:45 p.m. with no arrests or charges. Due to the large amount of people protesting, the Amherst Police Department contacted the UMass Amherst police, Hadley police and Massachusetts State police for assistance. The police left a statement which said, “an investigation into the incident is ongoing.”

UMass Amherst spokesperson Ed Blaguszewski gave a statement that said, “UMass is committed to responding promptly and effectively to all allegations of sexual assault and misconduct. We strongly encourage members of our community with information to the alleged Theta Chi incident or any incident of sexual assault or misconduct to contact university authorities immediately.”

In a statement released on Sept. 20, Chancellor Kumble Subbaswamy said, “Let me be unequivocally clear, we condemn sexual violence of any kind and are committed to providing robust support services to survivors and to vigorously investigating all allegations of sexual assault.”

Shayla Keane, a student at UMass Amherst, thought the protests were necessary. “The frats, Theta Chi especially, have become a threat to a lot of people on campus… it’s become normal for sexual assault to occur, and UMass isn’t doing anything to prevent it,” said Keane.

Looking to the future, Keane believes certain steps should be taken like “adopting the Survivors Bill of Rights [and] disband[ing] the frats that are known for this behavior.”

UMass Amherst student Liliana was one of the protesters outside the Theta Chi fraternity. Describing the protest, she said, “[it was] really powerful, there were definitely some hundreds there protesting… sexual assault survivors spoke about their experiences and how those experiences have affected them personally, as well as stories of their friends on campus.”

Liliana explained her own experience with UMass Amherst fraternities. “If you’re intoxicated or not sober or just not yourself or alone, as a female, you are in danger,” she said.

A petition has been put out on change.org and has gotten over 26,000 signatures since it was created on Sunday, Sept. 19 at 1 p.m. The petition says “Theta Chi has been involved in several sexual assault allegations and still has not been shut down or even suspended. Multiple brothers have drugged vulnerable college-age girls and have been involved in many violent acts towards men.” This petition calls for the Theta Chi fraternity to be disbanded or suspended.