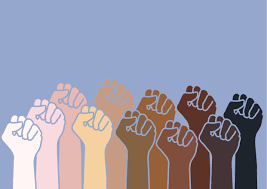 (Photo courtesy of Getty images) Race and ethnic studies minor at UMass Lowell is between 18-21 credits.

“We want to equip future generation to have discussions in an educated way.” Said Michel.
As a mentor for the River Hawk Scholar’s Academy (RHSA), she recounts the conversations she had during that difficult summer around the topics of social unrest and students and faculty reaction to the general news of the time.
“We had to say we didn’t know what the solution is, but let’s talk about it.”
She found that the many of the conversations she had ended positively.
“We went from disillusioned and frustrated to encouraged and supported.”
The Black Lives Matter protests during the summer of 2020 shined a spotlight on the subject of police brutality, particularly exacerbated by the murder of George Floyd, which sparked national outrage.
“We had some very serious conversations among ourselves … what we can do, what we should do, what is our responsibility as educators in this area (criminal justice)”
The criminal justice department did an evaluation of the courses they offered and decided to create a new course called systemic issues to focus exclusively on the topics of systemic racism.
“We can’t just say we don’t agree with what is going on, we need to do something within our area of influence and our area of influence is education”
The course was created largely in part to educate students within the criminal justice department with the mission statement of informing students about the legacy of bias, discrimination and inequality in the United States.
“In the grand scheme of things … it’s in its early stages”
Exploring the theories of bias and discrimination while also investigating the stereotypes and misconceptions that exist, the class focuses on the impact of contemporary criminal justice practices as well as the potential solutions or reductions of these systemic problems.
“When something happens, there’s one sort of precipitating thing gets a lot of attention … how does that get sustained and maintained over time? We need to commit, if it’s important to us we can’t let an incident that occurred two summers ago wane, it has to be something that we continue to do something about”
There has been a recent email circulating social media and Massachusetts news stations that was sent to UMass Amherst black-centered student organizations on Sept. 17.
In a statement from UMass Amherst Vice Chancellor, Nefertiti Walker, this email was described as “vile, blatantly racist, and violently offensive.” This email was sent from a non-student account by an unrecognized group that called themselves the UMass Coalition for a better society.
UMass President Marty Meehan put out a statement that said, “The blatantly racist emails recently sent out to Black student organizations at UMass Amherst and other deplorable acts of anti-Black hatred are appalling and disgusting.”
The office of multicultural affairs at UMass Lowell released a letter sent out to club eboards and student leaders stating, “We stand united with our UMass Amherst colleagues, and their African American/Black student organizations in embracing Diversity, Equity and Inclusion and rejecting all forms of hatred, bias, bigotry, and racism.”
Over the summer, UMass Lowell dealt with a similar instance of the threat of racism on campus. According to an article released by the Lowell Sun on June 24, UMass Lowell students gathered in front of University Crossing on Pawtucket Street in a protest calling for the removal of fellow student Liam MacNeil, who is allegedly a member of the neo-Nazi organization NSC-131.
UMass Lowell released their own statement on June 14, stating UMass Lowell joins with all those in our community who denounce racist and hateful language. The investigation into the matter is private.