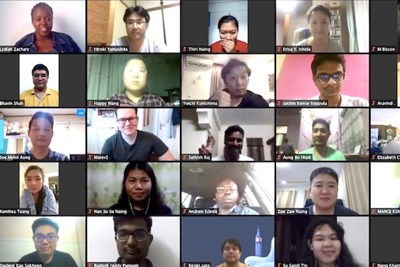 Much of UMass Lowell’s current student body have not been in a traditional school setting in over two years. COVID-19 hit when most of these students were juniors or seniors in high school, and since then it has been Zoom classes and clubs.

The classes of 2024 and 2025 have been desperate for social interaction while adjusting to life on campus. Finding people casually has proven hard for many people, so they turn to clubs.

“I looked through ENGAGE for hours, looking for anything that was running virtually.” Said Sabina Davis, a sophomore studying computer science, when asked about her club experience. “WUML, the student run radio station, was one of the few clubs I found that was actively taking people in.”

She went on to talk more about her experience joining the radio station, “It gave me a way to talk to people, I was sitting in my bedroom talking to people on the radio. It felt surreal, and then to come to campus this year and learn how it all works in person was crazy. A way to talk to people turned into learning how to properly broadcast and record shows.”

“My first trip to the dining hall felt like stepping into a different dimension. People were everywhere.” Davis said, laughing at the memories from the beginning of the semester. “I hadn’t seen this many people my age since graduation, and it felt like culture shock. It took me a couple weeks to get used to going to class and not just sitting in bed on my computer.”

While Davis was able to find a way to participate in clubs during the online semester, not all were as fortunate. Dylan Baker, a computer engineering major, said, “Well, nothing seemed interesting to me…The meetings were also on Zoom or Discord at like 7:00 or 8:00 at night when my house would be the loudest.”

When asked if he regretted not joining clubs Baker stated, “A little, I definitely felt lonely at times but found people in my classes on Zoom to chat with. Coming to campus I had a few friends. I was luckily able to find them, but I could see why people joined clubs to find friends. I might join one now that we’re back in person just to meet more people, but it’s not my main goal for this year.”

Both Davis and Baker stated that campus felt different, especially after almost two years with no in-person contact.

Clubs were where some students found their friends while others found them in classes.

Being on a full capacity campus is weird for many students, but with clubs back in full swing if you are feeling lonely you might find your group.