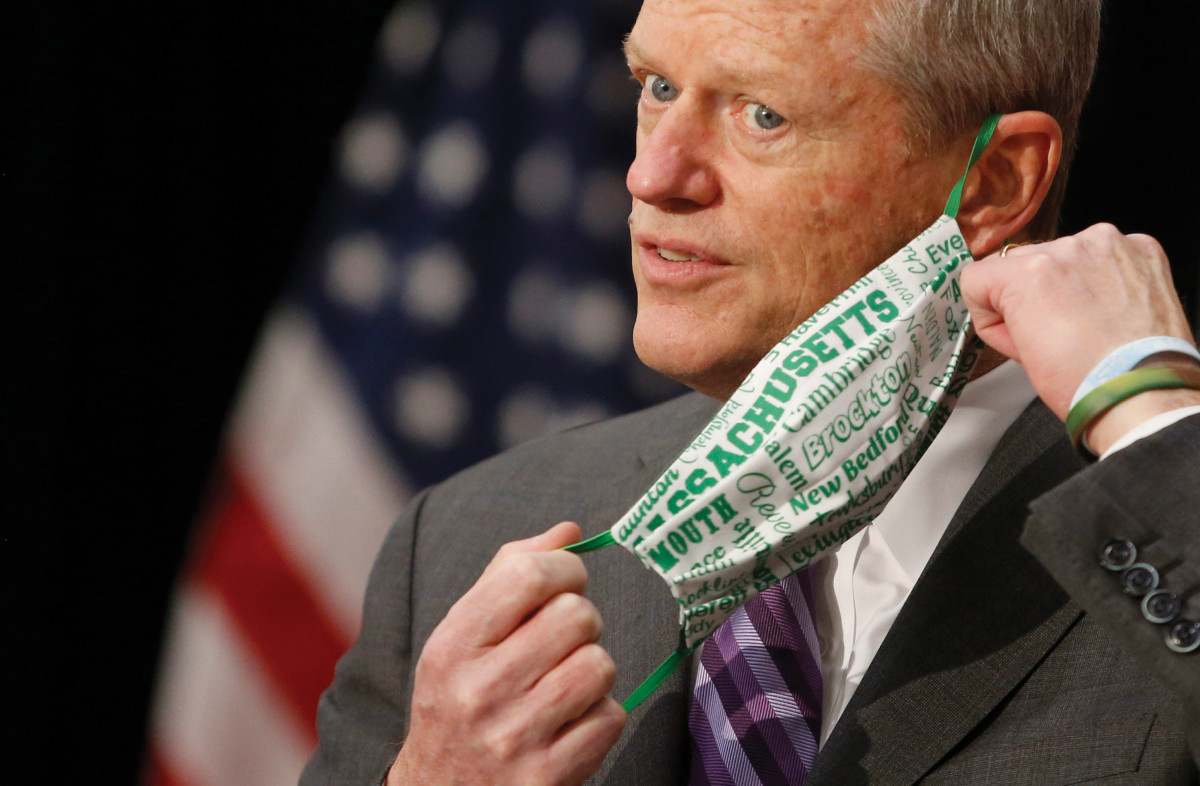 (Photo courtesy of Jessica Rinaldi/The Boston Globe via Getty Images) Gov. Charlie Baker takes off his mask as he talks into the microphone during a press conference during April of last year.

UMass Lowell announced on Thursday afternoon that they would be joining the growing list of schools lifting their mask mandates, beginning on Monday Feb. 28. This came after Governor Charlie Baker and the Massachusetts Department of Public Health announced they would be ending their indoor masking requirements two days prior.

This announcement came via an email through the university systems. In this email Chancellor Moloney stated that starting on Feb. 28, masks would be “optional” inside campus buildings, but still required on busses,  shuttles as well as in the Wellness Center. Moloney cited the university’s vaccine rates and declining cases statewide in the decision to lift the requirement.

Following the email announcement on Thursday afternoon, some students expressed excitement for a return to a sense of normalcy. Others were pleased that the school’s decision formalized what was already happening in dining halls and in gatherings. Those who stated they may still wear masks expressed they would do so to help protect immunocompromised or at-risk classmates and faculty. The Chancellor expressed such sentiment as well, asking that students continue to extend kindness to others, to respect their choices and to treat others with compassion.

Federal guidelines still require complete mask wearing on any and all “conveyances” which means that the university’s announcement does not apply to either buses or shuttles on campus. Masks will also still be required in the Wellness Center for the meantime.

UMass Lowell’s announcement followed a week of nearby K-12 systems and secondary education institutions considering similar measures. The towns of Billerica, Bedford, Burlington, Dracut, Methuen, Tyngsboro and Tewksbury all announced they would end mask requirements on Feb. 28. Lowell Public Schools similarly announced they would suspend their mask mandate on March 7, as did Westford Public Schools for March 4.

UMass Lowell was the first of the UMass systems to suspend mask requirements. The university will be joined by Northeastern University in Boston, who will also suspend their mandatory testing on Feb. 28. Emerson College also announced they would lift mask mandates starting as late as March 21. Stonehill College in Eaton announced they would lift their mandate earlier than the state deadline on Feb. 20, and Endicott College has also lifted their requirements.

UMass Dartmouth has also announced they will be lifting their mask mandates on Feb. 28. UMass Boston, however, has stated they will continue to mandate masks beyond Feb. 28, which may be due to the school being predominantly commuter. UMass Amherst has yet to make any comment.

Students were also reminded that they may continue to take advantage of the university’s free N-95 and KN-95 mask and antigen test supplies, limited to two of each per week. Students can find these through the University website or request them using the hyperlink listed in the Chancellor’s statement.