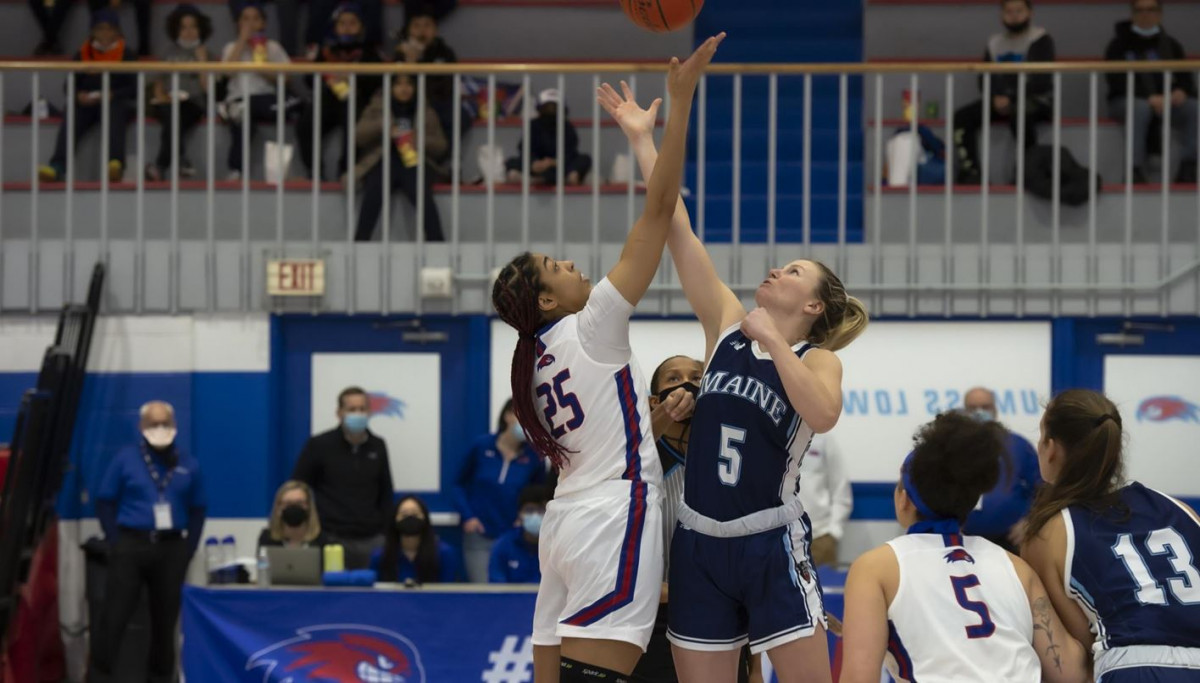 The UMass Lowell women’s basketball team faced an upsetting loss to the University of Maine Black Bears and University of Vermont Catamounts this week. The River Hawks are now 3-4 (6-10 overall) in the America East conference.

The River Hawks had difficulties against Maine, a team that has found its rhythm. The Black Bears are on a winning streak, beating New Hampshire and blowing past Vermont. The Black Bears came to Costello on a mission to avenge their home loss to Lowell earlier this year. Black Bear Anne Simon had a team-high seven steals and 12 points.

The River Hawks continued to have difficulties with turnovers against the Black Bears, with Maine gaining 23 points on turnovers: 14 of which came in the third quarter. Bad passes, traveling and shot-clock violations continued to be a constant problem for Lowell.

River Hawk guard Kharis Idom’s composure kept the River Hawk’s momentum against Maine. Idom is a key part in the River Hawk offense, playing at a great tempo. An a threat all over the court–she is an absolute baller.

But, the River Hawks learned from their mistakes against Maine and played Vermont with more awareness–guard Baylee Teale’s clock recognition led to a beautiful half-court jumper– though they still struggled with turnovers, and inconsistent officiating didn’t help the River Hawks.

When the River Hawks play with energy, they control the game. But, when they slow their momentum, they fall apart. They come out strong every game, trailing Maine by one point and leading against Vermont at the game’s halves, but in both games, they lost their composure in the third only to slowly regain it in the fourth quarter.

The loss to the University of Vermont Catamounts was heartbreaking. The River Hawks played with intention against Vermont and deserved the win, having it almost in their grasp. The River Hawks had a four-point lead in the final 20 seconds of the game. However, frustration over officiating came to a boil after a bad call against the River Hawks in the game’s last seconds. A River Hawk player made a gesture towards the referee and was given two technical fouls (which seemed excessive), giving the Catamounts four free-throw shots, allowing the Catamounts to tie the game. Another bad call brought Vermont to the free-throw line, giving Vermont a one-point lead with three-point five seconds left.

Still, the River Hawks should not be disheartened. They played hard against a formidable opponent and deserved the win.