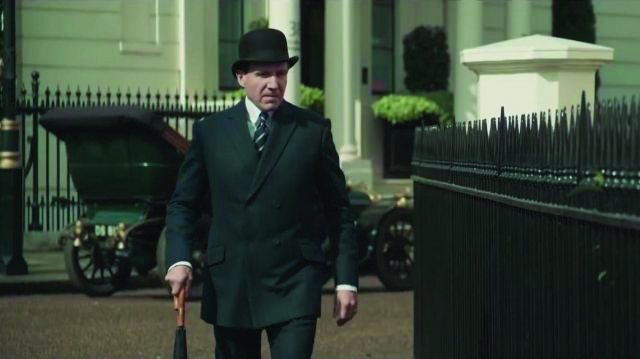 Written and directed by Matthew Vaughn, “The King’s Man” is the prequel to “The Kingsman” series–also directed by Vaughn–and stars Ralph Fiennes as Orlando, the Duke of Oxford: a former British soldier turned pacifist, who along with his son Conrad (Harris Dickinson), his maid Polly (Gemma Arterton) and his servant Shola (Djimon Gaston Hounsou), weave their way through an action-packed and somewhat clever plotline that feels copied from a World Wars history course.

Set during the First World War, “The King’s Man” tells the tale of the formation of the Kingsman spy agency. The group finds themselves attempting to stop a group of authoritarians and war-mongering criminals from plotting destruction–a difficult task at that point in history.

Fiennes gives a good performance as Orlando, and the cast, including Charles Dance, Daniel Brühl and Rhys Ifans play memorable heroes and villains. Still, the film’s genuinely emotional and shocking moments are predictable and relatively uninspiring. And, though the tone of the “Kingsman” series is supposed to be outlandish, it is based on a comic book series after all–when the film tries to be funny, it falls flat, and when it tries to be serious, it feels awkward.

Although screenwriters Vaughn and Karl Gajdusek skillfully entwine true history with fiction to create an absurd conspiracy theory, the film’s dialogue is sometimes dull or illogical. Still, Vaughn and Gajdusek manage a few surprises to keep the viewer guessing, even if we know how the historic events unfold.

The action scenes in “The King’s Man” are the most enjoyable and entertaining aspect of the film and are the most comedic element. Vaughn makes stylistic choices that replicate a comic book, making the action feel fast-paced. But most of the action scenes are overly artificial, and a few of the editing choices feel amateur for a major motion picture. Nevertheless, Vaughn has captivating shots that showcase impressive choreography and stunt-work.

The film’s set, costume design and soundtrack composed by Matthew Margeson and Dominic Lewis create a sense of realism, engrossing the viewer in pre-war Europe and highlighting the few dramatic moments. Yet, many scenes are still artificially reliant on the use green screen.

But the film isn’t about authenticity or drama, it’s about action, and these authentic moments are interrupted by scenes that make the film feel like a Ken Burns documentary on amphetamines.

A Wilfred Owens poem entitled “Dulce et decorum est Pro patria mori” or, “It is sweet and fitting to die for the homeland,” is quoted throughout the film, and Vaughn nods at Britain’s imperialism in Africa and Scotland. But the film’s anti-war message is somewhat contradictory when it seems the only way to save lives and England is by killing more people.

Further dampening the film’s ethical dilemmas of war and imperialism, Orlando’s messages of equality and helping those less fortunate are odd when his servant Shola barely speaks.

Despite its flaws, the film is pleasurable and worth a stream, even if it fails to  break any barriers. Vaughn’s stylistic direction and production deliver on a movie that has a lot of similarities with a history course’s combined GPA: Average.