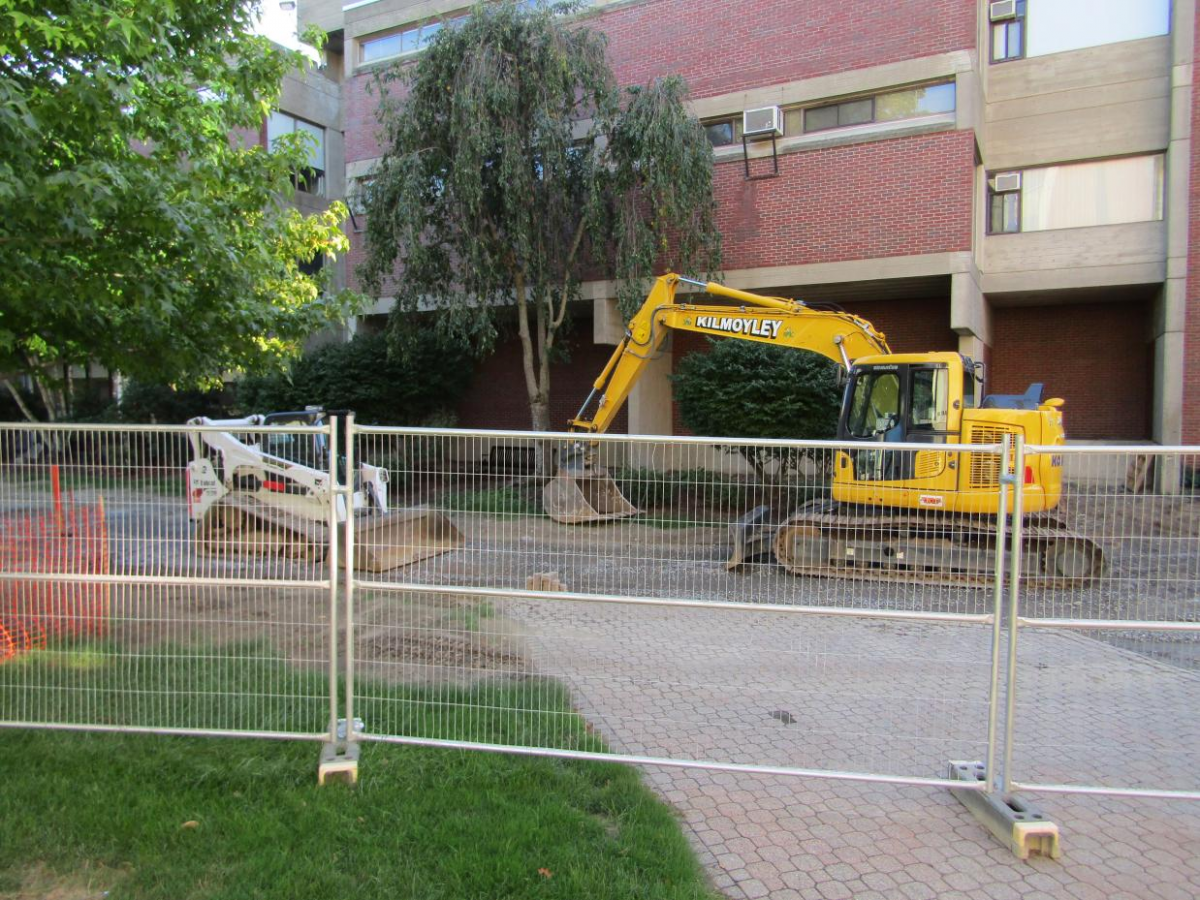 (Photo courtesy of Michael Van Arnam) “The construction sight outside of Weed Hall on South Campus, just one of several areas undergoing construction.”

Several construction projects are currently underway on South Campus, with plans for future projects as well.

There are fenced-off zones outside Weed Hall, Solomont Way and across the street from Dugan Hall. There is also scaffolding outside Sheehy Hall. All of these projects are on their own timeline. There are also future plans to improve interior aspects of Durgin Hall, Sheehy Hall and Weed Hall, but those are only in the early design process with no current physical construction.

Adam Baacke, the executive director of planning, design and construction at UMass Lowell, says the visible construction outside of Weed Hall is part of a project intended to improve the fire sprinkler systems and the water service line for the sprinklers. The project will also provide updates to the hall’s fire alarm system.

He says excavation is required to work on the water service line which is why the fenced-off worksite is necessary outside of Weed Hall. The project started over the Summer and is projected to be completed by the end of the Fall.

The construction across Dugan Hall is in regard to an infrastructure project that plans to improve the electrical grid for South Campus.

“There’s an electrical grid that serves the South Campus. Our electrical service comes from a substation that’s located behind Coburn Hall. We then distribute it to many buildings as opposed to buildings having direct service. Some of them do but most of them don’t have direct service,” said Baacke. “We are in the process of improving the reliability and redundancy of that network that distributes electric power around the campus.”

To improve the electrical grid a conduit must be installed under Broadway street which requires permission from the Lowell city council in turn leaving the construction outside Dugan inactive as of now.

“We should have that permit relatively soon, and that project should resume and it should be done by sometime in October,” said Baacke.

Over at Sheehy Hall a roof replacement will be installed. “Some of the materials have been delivered to work on replacing the roof of Sheehy Hall. If it hasn’t started yet, it will be fairly soon,” Baacke says. Sheehy Hall will also be receiving replacements for its emergency generators. The generators are original to the building which is now more than 30 years old and need to be replaced, said Baacke.

Future renovations will also be made to Sheehy’s interior lobby. “There will be a future project in Sheehy Hall to reconfigure the lobby and entrance area to work better and more supportive of students who want to use that space,” said Baacke. “That’s in relatively early design phases.” The physical work on Sheehy’s lobby will probably not begin until next Summer. Since Sheehy Hall houses students, any work inside the Hall can only be carried out during breaks from the school year.

There will also be future improvements to Weed Hall’s interior. The building will receive a new entrance and substantial changes will be made to the ground floor and some instructional spaces, Baacke says. Physical construction for the project will likely not be starting until the Summer of 2024.

A donor is also funding the improvement of the concert hall in Durgin Hall. “That is a facility that will be receiving new seating, some accessibility compliance measures and some new features to the technical theater systems, as well as some improvements to the acoustics of the facility,” said Baacke. The project is still in its early design phase and the construction is scheduled to be next Summer.