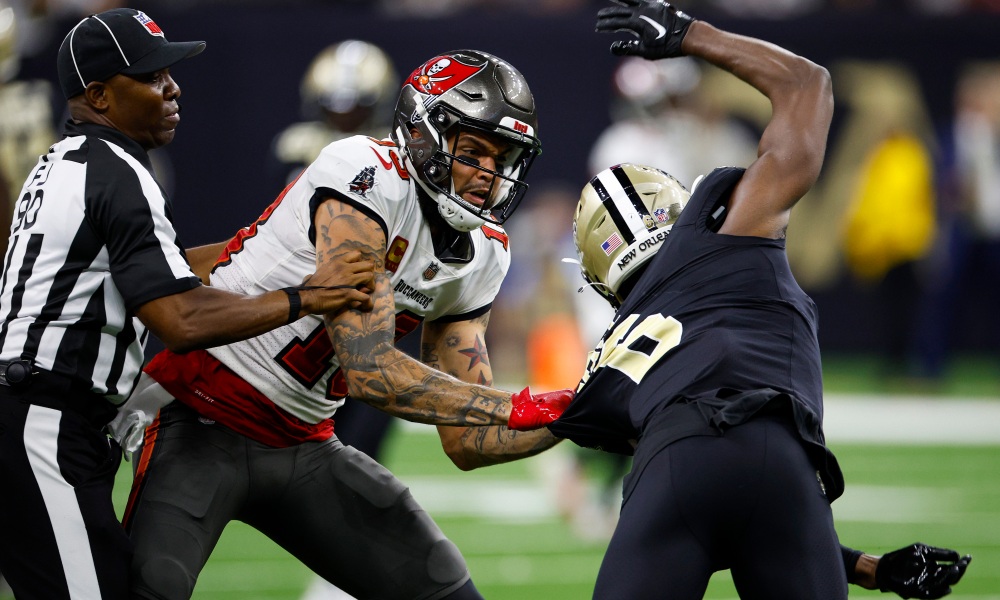 There is no football without drama and this takes the cake. As usual the NFL delivers with this latest altercation that occurred on Sunday in a Week 2 matchup between the New Orleans Saints and Tampa Bay Buccaneers.

Entering the 12:55 mark of the 4th quarter the score was tied at 3-3 before a huge brawl broke out. As the Bucs were getting ready to punt the ball cornerback Marshon Lattimore appeared to wave at quarterback Tom Brady in a taunting manner.

As such, this caused running back Leonard Fournette to run over and shove Lattimore. Wide receiver Mike Evans was infuriated by this and then ran over and shoved Lattimore to the ground. This led to Saints safety Marcus Maye being involved as he tried to defend his teammate. Lattimore got up and went after Evans. After this, flags were thrown and players from both teams tried to separate Evans and Lattimore.

“It gets spicy when you come to New Orleans,” Evans said after the game. The fight appeared to ignite a 4th-quarter run where the Bucs ended up scoring 17 points to win the game 20-10 over the Saints in Caesar’s Superdome.

Members of the Saints came to the defense of Lattimore. Running back Mark Ingram had a problem with Lattimore getting ejected. “I don’t understand how Marshon got ejected when somebody comes and sneak hits him,” Ingram said.

After the brawl Saints defensive end and team captain Cameron Jordan and fellow captain and linebacker Demario Davis came over to console Lattimore. Saints head coach Dennis Allen stated that while fights happen he would have preferred Lattimore to not retaliate. Evans and Lattimore both got ejected from the game, and eventually Evans was suspended for 1 game without pay.

Evans and Lattimore have a well-documented history of altercations with each other. Back in 2017, Evans shoved Lattimore in the back after the latter had an exchange with then-Buccaneers quarterback Jameis Winston. This led to Evans being suspended for 1 game. He did state that his actions were “childish.”

In 2020, Lattimore shoved Evans in the back which led to Evans shoving him back and knocking his helmet off. Lattimore was fined $10,500 for unnecessary roughness. Playing in the same division, the two often match-up against each other which has led to them disliking each other. One can even call it hatred.

Tom Brady blasted the league for suspending Evans. On his podcast “Let’s Go!” he stated that it was “ridiculous” that Evans got suspended.

“I don’t think it deserved any type of suspension; I think that’s ridiculous. Hopefully we can move past it, and get to a better place,” Brady said. Fournette also expressed his disapproval on Twitter. “It’s cool when they do it, it’s a problem when I do #GoBucs,” Fournette wrote.

Tampa Bay looks to host the Green Bay Packers this Sunday at 4:25 ET. They will be doing so without Evans. With the number of injuries to the Bucs receiving corps it will be a lot more difficult for Brady and company to pull it off.