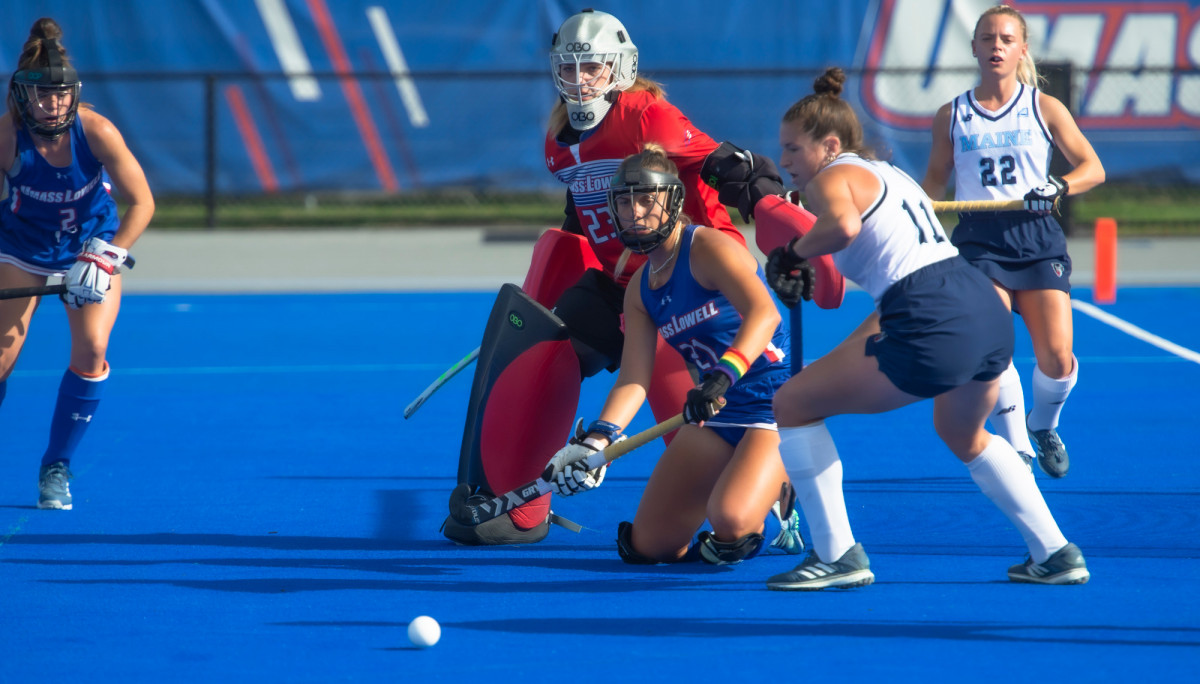 The River Hawks, after riding a scorching winning streak, fell short against UMaine on Friday, September 30th, being handed their first conference loss of the season.

With an overall record of 7-3, the field hockey team has dominated at home, losing only one game at the Wicked Blue Field and only losing one game in league play.

Their only three losses have come this past Friday against UMaine and on the road early in the season. The first loss was against UConn in the season opener, losing 0-2, and the other in a shootout loss against UMass Amherst, losing 2-3.

Since their shootout loss, the River Hawks bounced back and took advantage of their next five games at home over a two week stretch, beating their first two opponents narrowly, both scores 2-1, then defeating Merrimack College with a decisive 6-1 victory.

The final two home games in the stretch were against conference rivals Stanford and UC Davis. The River Hawks narrowly beat Stanford, the score 1-0, and then avenged their shootout loss with a shootout victory against UC Davis with a final score of 4-3.

Over a week after the start of league play for UMass Lowell they traveled up north to play their conference rival in the University of New Hampshire (UNH). The Wildcats, who were returning from their first conference game against UMaine, which they lost 1-5, were looking to bounce back from a tough away-game stretch in which they lost five games straight.

The River Hawks, however, would not let that happen. Looking to win their first game on the road, UMass Lowell controlled the game from start to finish and decisively won 5-1, extending their winning streak to six, and carrying momentum into their Friday matchup against conference rival UMaine.

The UMaine Black Bears, leading into their game with UMass Lowell, had a record of 6-3 and remained undefeated in league play after their 5-1 victory against UNH and narrow 2-1 victory against UAlbany. With the win, UMaine could knock UMass Lowell down to the third-place spot in the America East conference and take the first seed from the University of Vermont (UVM).

Unfortunately, despite the game being close, the River Hawks came up short against UMaine, losing 0-1. The game remained scoreless for the first three quarters, where UMass Lowell goalkeeper Eleonore Boekhorst managed to make two close saves and the strong UMass Lowell defense held the UMaine offense to only five shots all game.

On the other side, UMaine goalkeeper Mia Borley made six saves while the UMass Lowell offense laid pressure on the opposition with 13 shots in total.

The game, however, would be decided in the fourth quarter, when the UMaine offense pushed up the field. UMaine forward Chloe Walton would set up a shot for back Poppy Lambert to score their one and only goal of the game and close the books on what was a hard-fought conference matchup.

UMass Lowell forward Madison Leeper’s two shots were both on goal as she put pressure on UMaine’s goalie. Following behind her was midfielder Jenna Berger managed to get five shots this game, two of which were on goal. Forward Mirthe Gans’s one shot this game was also on goal, and midfielder Meike Vischer took two shots, one of which was on goal.

With the loss, UMass Lowell is now third in the America East conference, with UMaine taking the number one seed away from UVM with an undefeated conference record of 3-0. With multiple conference games ahead in UMass Lowell’s schedule, the River Hawks will look to bounce back from this loss and continue their dominant season.

(On Sunday, October 2nd, the River Hawks defeated Northeastern on the road, the final score 4-2. This increased their record to 8-3 and split their record on the road evenly 2-2).