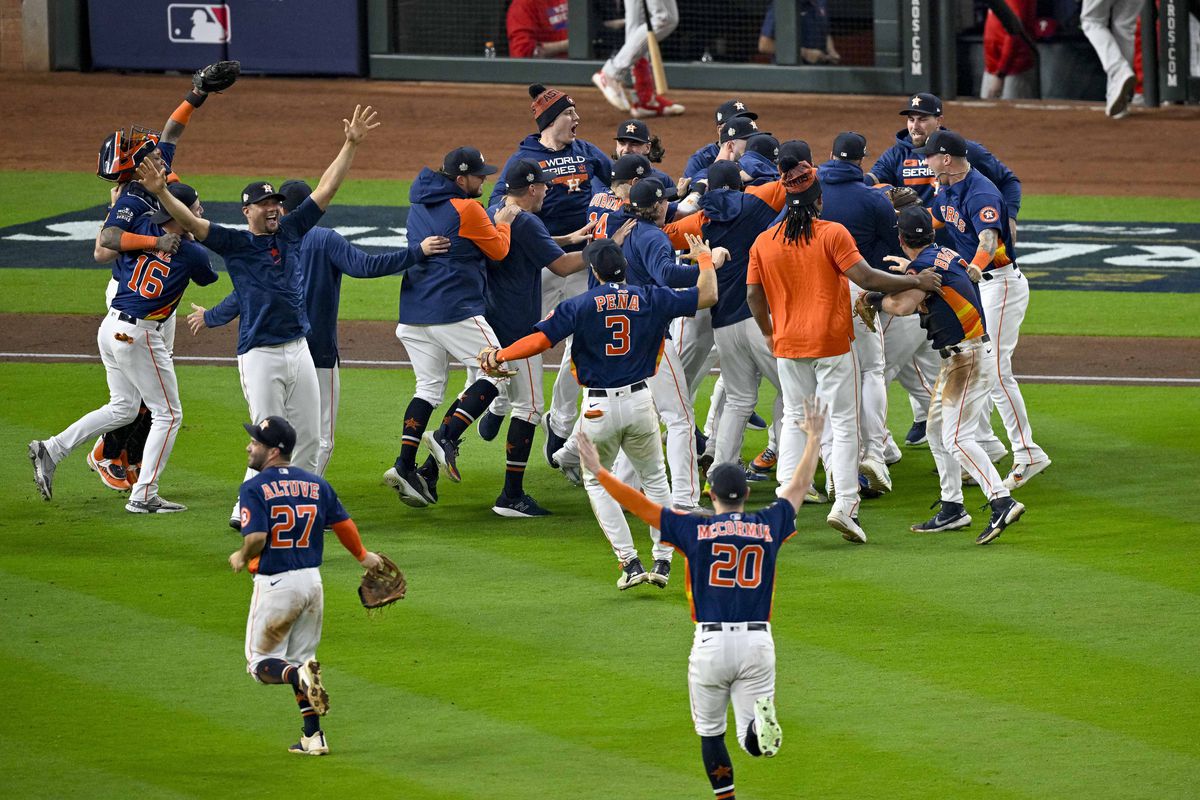 (Photo courtesy of SBNation.com) “Houston Astros celebrate as they defeat the Philadelphia Phillies in game six and win the World Series.”

A new reality has been bestowed upon the baseball landscape: The Houston Astros have won the 2022 World Series. After a very long and fruitful journey, they finally get the job done for the first time since 2017 and are the first team to win it all at home since 2013, when the Boston Red Sox beat the St. Louis Cardinals in six games. How did this conclusion rear its ugly head? Well, it’s time to review the 2022 World Series.

Game one was a very intense affair between both sides, but a choke was born on this day. The Astros were up 5-0 on the Phillies, but upon realizing this, the Phillies started sending nukes with the help of outfielder Kyle Schwarber, who helped the Phillies come back down 5-0 to take the game 6-5. It was a great start to the World Series so far.

After an exhilarating game one, expectations for this series were high for every baseball fan in the known universe. The Astros, again, went up 5-0. However, this time they contained the Phillies to just two runs, halting any comeback and securing the win, evening up the series at one a-piece. Now it was time for the series to shift back to Philadelphia.

The Philadelphia atmosphere regenerated the excitement and jubilation of this series, with more nukes being hit deep into the outfield. The Phillies reigned throughout the night, and the Astros were not able to do anything to counter the might of Philadelphia’s terror while being embarrassed on the road. Revenge was coming, and Houston was out for blood.

This was a historic performance by the Astros, doing what they do best and generating runs, having a picture-perfect defense and very solid pitching on this night. What resulted was only the second-ever no-hitter in World Series history, with the first time being in 1956, when Yankees pitcher Don Larsen threw a perfect game. This was also the first-ever combined no-hitter in World Series history. Truly a monumental performance.

This game was hard fought by both teams as they were desperate to head back to Houston with the series lead. Not a lot of runs were produced, but it sure helped that each team’s defenses were fortified and prepared for an all-out war. Houston may have come out on top, but the pressure was on for them big time. It became do or die, going into a position they haven’t been in since 2017.

Despite the best efforts of the Phillies on this night, they looked washed. They could not manage any offense and the defense made too many mistakes and had no gas left in the tank. The Astros saw this as an opportunity to finally close it out, and they did. Making their last push, they finally broke through and took it. They won the World Series.

Dusty Baker finally has a ring as a manager, the hungry city of Houston was dying for a clean championship and they both finally get the victory they want. Jeremy Pena, the rookie shortstop brought in to replace Carlos Correa, was named the World Series MVP, and rightfully so. Houston needed this so badly, and now the mocking and misery can end. Unless an unknown scandal is uncovered in a couple of years, tainting this World Series too. Congratulations to the 2022 World Series Champions, the Houston Astros.