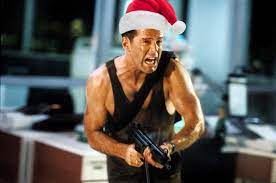 (Photo courtesy of Photo illustration by NBC News; 20th Century-Fox) Is die hard a Christmas movie? One student weighs in.

But how could it be? There is no snow, no gift giving, no Santa Claus– and it was even originally released in July. Well, none of these features define “Christmas” nor “Christmas movie.” What “Die Hard” does have along with all the best traditional Christmas movies is the Christmas Spirit.

“Die Hard” prominently features themes of family, gratitude, compassion and neighborliness, which I believe most people would agree sum to a large portion of what the Christmas Spirit truly is. Well accepted Christmas movies such as “A Charlie Brown Christmas,” “Rudolph the Red-Nosed Reindeer” and “A Christmas Carol” all feature these themes and undoubtedly hold the Christmas Spirit.

Of course, there are films that hold several of these themes and are most certainly not Christmas movies or bearers of the Christmas Spirit. This is due to differences in presentation and audience reception. A movie such as “A Beautiful Day in the Neighborhood” holds all four of the listed themes, but can not be said to have Christmas spirit because the film is not presented in a Christmassy way.

So then does “Die Hard” present itself in a Christmassy way? It certainly does. The events of the movie take place during Christmas time, and only unfold because John McLane is in New York for Christmas. The movie is founded on Christmas and could not exist without it. The final moments of the film are a culmination of its Christmassy attitudes.

Indeed, the reverse phenomenon is true, too. Many movies do not hold sufficient Christmas Spirit to be true Christmas movies, but the Christmas Spirit held by the audience viewing them is high enough for this to be overlooked and denied. Such movies include “The Polar Express,” “Olive the Other Reindeer” and “The Year Without a Santa Claus.” Movies like “The Chronicles of Narnia: The Lion, the Witch and the Wardrobe” could easily fall into this group if they were also only watched during Christmas time.

Since “Die Hard” is presented in a Christmassy way and holds themes embodying the Christmas Spirit, it should be more widely considered a Christmas movie. The only roadblock in its way is that it is such a good film, people can not let themselves only watch it during Christmastime, and therefore lacks the crucial final element of Christmas Spirit in its audience to truly and undeniably be a Christmas movie.