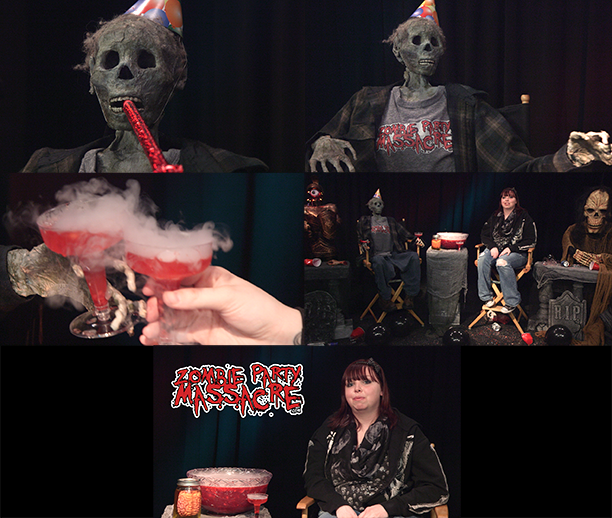 “Zombie Party Massacre” is the first full-length feature film being written and directed by Lowell resident Jessica Houlihan. The idea for this project was developed from a short film she produced in college called “Life of the Party.” She took the script from the short and decided to expand the story; the story developed and transformed into what is now “Zombie Party Massacre.”

The film follows two roommates, Jeff and Jason, who throw a Halloween party. One by one, their guests become infected and turn into zombies. Houlihan describes the story as a “gory splatter comedy.”

Since she was a child, Houlihan has been interested in working in the film industry. “I’ve been a writer my whole life and [have looked] at movies differently than most people,” she recalls. She attended Fitchburg State University for film and video. This is where she met Jason Moore, her right hand man and the producer of her film. He wasn’t an official student at Fitchburg, but he attended classes and learned what he needed to from Houlihan.

While she was at Fitchburg, she developed four short films with help from Moore. From there they went to New York City, where Houlihan worked for Troma Entertainment, and then moved to Los Angeles to complete an internship with Full Moon Features.

One of their main priorities was building a cast and crew. Last week, they officially finalized their cast. Houlihan and Moore submitted the casting call to a few different websites and received a better turnout than they had expected. “We had people to choose from – it was fun,” said Houlihan. They still need help recruiting the rest of their team –everything from a film crew to set designers.

One of the biggest challenges they have faced is finding financial support for the film. In August, they created an Indiegogo campaign, an online platform in which the public can donate to their project. “We are trying to raise a good chunk of money,” said Moore. “We want to try to do it as professionally as we can.”

Houlihan and Moore have also toured New England Studios, where they are hoping to film the entire movie. “It all comes down to money,” noted Houlihan. They are planning on building a set for the film because they want to make the film very bloody – this will be an easier cleanup than using an actual house as a location for filming.

The anticipated release date is Halloween 2015. They hope to release the film digitally and on DVD, along with having midnight showings at local theaters and submitting it to smaller film festivals.

If you wish to support their project, head over to https://www.indiegogo.com/projects/official-zombie-party-massacre-campaign
The campaign ends on Oct. 12.