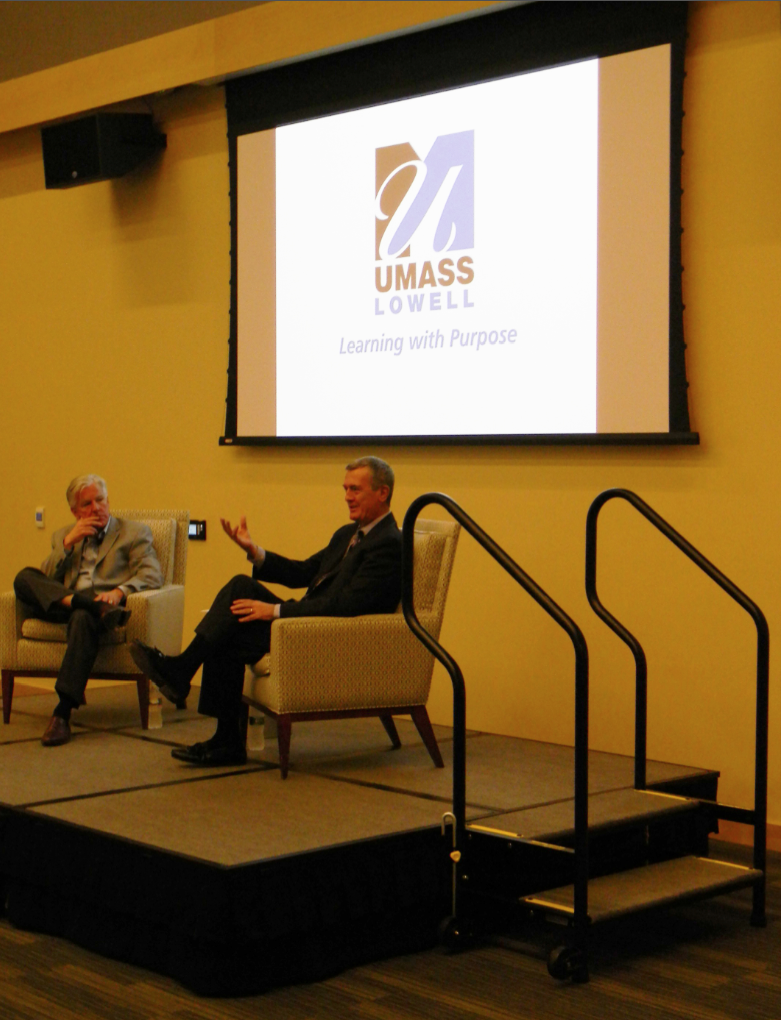 As the campuses and student population of UMass Lowell continue to grow, many are turning to a current initiative that will tailor the city in order to better suit the university.

Along with the Student Government Association and Chancellor Marty Meehan, city officials including City Manager Kevin Murphy have collaboratively drawn out a strategic plan to the year 2020 to duly harmonize the needs of the city with those of the university.

This shared vision of Lowell is a sort of blueprint for the project, but one that is not yet finalized. In an attempt to color in this plan completely, the SGA hosted a forum Wednesday to receive input from students. “We wanted to get ideas from all of you,” said Meehan.

The first few questions from students covered topics such as supporting more businesses to accept the River Hawk Dollar and building more grocery stores. Many presented ideas that could be traced back to other cities. Examples coming from cities like Boston and New York included food trucks, more restaurants and a Faneuil Hall-themed feel to downtown Lowell.

Students also compared UMass Lowell to other schools that were thought to have more vibrant environments and simply more to do in the surrounding town or city.  Music venues, small business movie theaters as well as the pedestrian culture of other cities were proposed as suggestions for the reimagined community of Lowell.

“I think [this initiative] will create new opportunities for students in the areas of entertainment, dining and the quality of life,” said Gerrit Boldt, a sophomore majoring in economics and history.

The bicycle lanes, Murphy agreed, were also inadequate for the requirement pushed forth by the university. “We have come up with a new plan for bike lanes,” he said. “We will roll that out in November.”

Other than the bike lanes, “a lot of the pieces are in place for the college town atmosphere. The timing is perfect… and the setting is ready,” said Marion. In his and several opinions of others, this project is easily plausible. Some argued, however, that the issue of on and off-campus safety would need to be addressed before anything else.

Murphy agreed with this and offered, “We have concentrated on making [downtown Lowell] a safe place to be.”

Meehan explained that UMass Lowell has also contributed.  “The coordination between the Lowell police force and the University police force has never been more coordinated,” he said. With these statements the forum came to an end.

“I think it’s another layer of success that we can add to the school,” said Sheila Angelo, vice president of SGA. “I think working on downtown and making Lowell more presentable and more student-friendly would be another selling point for the school,” she said.

Various aspects of this initiative have different deadlines and due dates. However, by the year 2020, most of these developments will be defining features of the UMass Lowell experience. “I think it’s really important for the university to continue on its upward trajectory of becoming a place of great national renown and a place that has a fantastic national brand,” said Boldt.