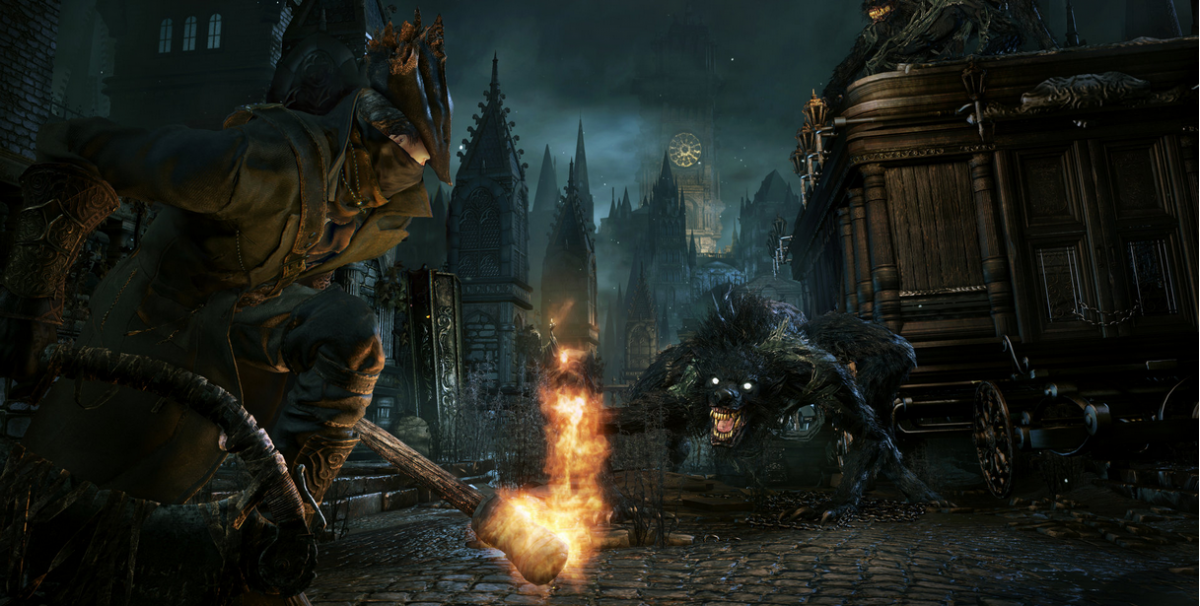 “Bloodborne,” the newest creation by the mad geniuses at From Software, is the rare breed of game that demands your full attention at all times. At no point did I ever feel safe, with every corner of the desolate city of Yharnam potentially being home to new monstrosities and traps, each one capable of killing my character with only a moment’s notice. Quietly beautiful yet unendingly cruel, it’s a game that demands to be treated with respect, and is more than willing to bring down its wrath on anyone who does otherwise; but thanks to a smart combat system, an absolutely breath-taking world and an almost undying sense of mystery and dread, it’s an experience that gives just as much as it demands and is all the greater for it.

Of course, if you’re a fan of From’s previous work on the infamous “Dark Souls” series, this shouldn’t come as much of a surprise, as much of the gameplay from those titles carries over into this one. For those who aren’t familiar, “Bloodborne” is a fantasy role-playing game that tasks the player in exploring the cursed city of Yharnam, which will involve fighting enemies, killing bosses, and reaping as many blood echoes as possible from them in order to progress. Blood echoes function as both experience points for leveling up your character and currency for buying equipment at vendors, making the collection of them rather important. The catch is that if you end up falling to one of the monstrous creatures lurking in your vicinity, you drop every last echo you have collected, putting them at risk of disappearing forever if you can’t pick them up again before your next death. This dynamic gives every encounter an intense feeling of dread, as you’re forced to weigh the risks of moving forward to explore the next area with running away and spending your echoes while you have the chance, with the fore knowledge that all the enemies you just fought will respawn as soon as you return.

Adding to that dynamic even further is a combat system that succeeds in being as empowering as it is constraining. Every dodge, parry, attack and block in the game drains energy from your slowly recharging stamina meter, requiring you to carefully consider every extra movement you make for fear of being caught with your guard down. This leads to a much slower and methodical combat system than you would normally expect from a game like this, as it’s just as important to exploit the movements and openings of your enemies as it is to actually defeat them. Running counter to this idea is the new health re-gain system, which allows the player to take back health lost in battle by damaging enemies immediately after taking damage, at the risk of taking even more damage in the process. These clashing gameplay concepts create a constant tug-of-war between pushing the offensive to seek retribution for damage done, and backing off in order to heal and strategize, adding a level of ferocity to the combat that even the previous “Souls” games don’t quite match. That’s not to say that the combat in “Bloodborne” is better than in those games, just that it felt different enough to keep me on my toes while still carrying the same amount of depth, which is exactly what it accomplishes.

What I loved about this game beyond just the combat system was just how multi-layered and rich the city of Yharnam feels no matter where you are in it. Every area of the map feels alive, with crazed Hunters prowling the night for monsters, witches cackle incessantly behind think veils of fog, and creatures beyond understanding hiding just out of sight at all times. This is further bolstered by incredible level design that twists environments in a way that makes it consistently rewarding, from a story and a gameplay standpoint, to wander off of the beaten path.  I lost count of the number of times I just got lost going down every alleyway or secret path I could find in the hopes of finding secrets, whether they be fantastic new treasures or completely new areas I otherwise never would’ve found. While initially daunting in its complexity, “Bloodborne” succeeds in making its world feel like a sprawling video game dungeon and an environment that’s been thoroughly lived in at the same time, which I am incredibly impressed by.

When it comes to the graphics and sound for this game, From Software absolutely hit it out of the park. The city of Yharnam looks consistently gorgeous and dreary, with each environment oozing with more artistic flourish than most entire games. Character models and enemy designs burst with detail and originality, with special mention going to the boss fights for consistently being some of the most horrifying demons I’ve seen outside of a traditional horror game. Same goes for the sweeping orchestral score that punctuates every moment of victory and defeat, as well as the top-notch sound design that exists throughout. The only considerable downside I found technically is with the load times, which can last up to thirty or forty seconds at a time, which can get annoying since it occurs every time you die or teleport to a different area. Thankfully, in the time I played with the game, I never ran into anything game-breaking and, as of this review, there is a patch in development that should improve the load times considerably, though to what extent is still unknown.

“Bloodborne,” like the “Souls” games that precede it, is not a game for the casual player or the faint of heart. The challenges that you’ll face in your time with this game are among the hardest you’ll find this generation, even passing the original “Dark Souls” in multiple ways. But what makes the game truly great is that, no matter how impossible an encounter or boss may seem, every challenge is surmountable, and the feeling of satisfaction you get for overcoming the game’s toughest moments is unmatched in gaming. Breathtaking in its scope, brilliant in its execution, and devious to its very core, “Bloodborne” is the first truly great current gen game and comes highly recommended to anyone strong enough to take it. If you can help it, this is not a game you want to miss. At the time of this review, “Bloodborne” is available exclusively on PS4 for $60.