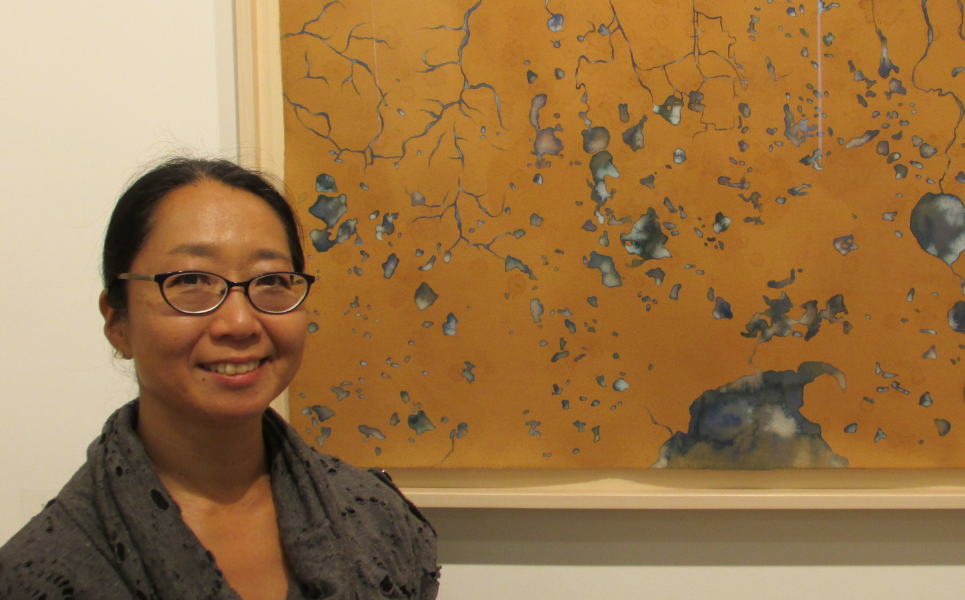 It seems like every day there is more news about California. The droughts they are enduring are the worst in over one thousand years, and more and more often the issue of water scarcity is brought up because of it. But this is not solely a Californian, or even American, issue. All over the world clean, drinkable water is either disappearing or being squandered. Activists are concerned about this and are trying to influence policies in Washington, D.C. and around the world, but here at UMass Lowell there is an opportunity to get a unique perspective on this issue through art.

In the University Gallery in Mahoney Hall there is an exhibit titled “In Solidarity” by Naoe Suzuki focusing on the issues of pollution and water scarcity. The exhibit shows selections from a number of her collections and features the unveiling of an interactive element which she hopes to carry across.

Suzuki was born in Japan and moved to the United States as a young adult. As an artist, she became interested in the issue of water mistreatment after visiting the location she now calls her second home, the Blue Mountain Center in the Adirondacks. “I call that place paradise… and that’s where I felt the healing energy of water. But at the same time I started really thinking about terrible conditions of water.” The past four years she has devoted herself to art concerning these issues, making collections studying everything from pollution to scarcity to simply admiring water’s inherent beauty.

Suzuki is very passionate about both her message and her art and said, “I hope that my artwork will kind of trigger their mind if they haven’t thought about it, but I also want them to enjoy the beauty of the work even if they’re not interested in water.” All of her work is beautiful, none intentionally disturbing or off-putting for the sake of her message. This does not mean her point is not made. Rather, the work combines the intrusive qualities of things like wires, trash, even human remains with flowing, soothing colors and designs that still appeal to the eye. “I was always drawing about water, but weird things started floating in that water,” she said.

The methods used in her art are just as interesting and well thought-out as the message and really add dimensions to her pieces. Depending on the work she will use anything from mineral paints to pen to tea staining. The paints in particular are of just the right consistency and makes the water look as though it flows across the page and creates soothing tones of blue. For some of her work, however, Suzuki used an interesting method: laser-cutting. Her “Water, is Taught by Thirst: WHITE” employs this method, creating cleanly cut yet slightly singed and tinged edges mirroring the geographies of Great Boston, the Adirondacks and Greater Florida. “Originally I didn’t even think about laser-cutting… It’s not about how well I can cut, it’s not about the craft of it… I didn’t want people to come up and say ‘oh I can’t believe she cut this by hand.’” The pieces cut from this series were then employed in other works like “Over and Out,” “Your Mate,” “Charles and In Solidarity,” and “Your Pal.”

There is one participatory piece in particular, however, which is exceptionally interesting. In the back of the gallery is a typewriter which attendees can use to answer the question, “What is my relationship with water?” on provided paper. These pieces hang on the wall to their right. When their response is typed, their answer will go on the wall and the question will be given to them to take with them. Suzuki not only wants people to engage with this question, one she has pondered continuously herself, but by giving them paper to take home she hopes that the visitor too will continue to ponder and think about water and what it means to them.

Whether it is fracking or the commercialization of water, Suzuki is outspoken about her beliefs and ardent in her speech. And there is a good deal for her to be incensed about. It is predicted that “by 2025… 1.8 billion people will be forced to live under acute water scarcity, and then 2/3 of the world’s population will live under water stressed conditions.” Suzuki has stories, examples, and evidence to spare on these issues, equal parts astounding and disturbing. In particular she dislikes that something so necessary, so important to well-being, is commercialized. She talks of Detroit, and how people who cannot pay for water are not given access to it. “Water and air are free, that’s what they used to say, but not so anymore… That’s denying them most basic human rights.”

In particular, Suzuki admires activists. Oftentimes she has pondered whether remaining an artist is acceptable given how much she cares for water and how desperately she wants to help it. But while she does not consider herself an activist, she feels that through her art she can still do something for water. When asked if she was an activist, or considered herself one, she said, “In a way I am… but I’m also an artist. My artwork, it’s not didactic.” Ultimately, she thinks the best way to tackle this issue is to institute laws and sew loopholes in government. “Sometimes I do feel frustrated… I really admire activists who are out there and trying to change the policies. We have a Clean Water Act. But there’s lots of loopholes… I really think we need to change the policies.”

Suzuki thanks in particular the Blue Mountain Center and Pollock-Krasner Foundation for their help and support in making these projects a reality. It is also worth noting that this month a catalogue of Suzuki’s will be coming out, entitled, “Be Water, My Friend.” The catalogue will also feature essays by curators and the Executive Director of Food and Water Watch. She intends to take her art and especially the interactive component to cultures and countries across the globe, getting the perspective those in impacted countries have about water and its scarcity.