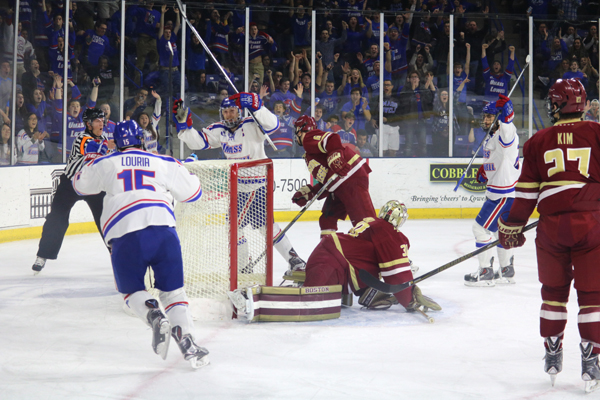 River Hawk teammates raise their arms in celebration of A.J. White’s goal to put the team on top in the first period. (George DeLuca/Connector)

When the moment got big, the River Hawks stepped up to make plays.

“It was a great overall effort,” said UMass Lowell head coach Norm Bazin. “I thought we gutted that one out. The urgency was better throughout the game, and I thought the penalty kill was strong. We still have some work to do in certain areas, but overall I think you have to be happy with that performance. The goal-tending was also excellent.”

The River Hawks needed a win to finish fourth to get a bye in the first round of the Hockey East Tournament starting next week, as well as they needed a loss by Boston University to Notre Dame.

Many of the 6942 that packed into the Tsongas stuck around after the game, as the Boston University vs. Notre Dame broadcast was aired on the video board. While the River Hawks were not on the ice to see it, they heard a roar from the crowd as Notre Dame held on to beat B.U. 1-0. Because of that result, UMass Lowell will not be action next weekend, as they can now enjoy a bye week.

“We were waiting for coach to come in,” said UMass Lowell senior captain A.J. White when asked if the players watched the end of the B.U vs. N.D game. “But we heard the reaction from the fans that were waiting, so that was pretty exciting. It’s always nice to get the extra rest to work on parts of our game that need to improve.”

The River Hawks outshot the Eagles 18-11 through two periods and had the better scoring chances, but found themselves on a penalty kill with the score still tied to start the final frame. Down a man, UMass Lowell broke into the offensive zone, and Tyler Mueller wristed a shot that beat BC goalie Thatcher Demko to his left for a short-handed goal that gave the River Hawks renewed energy to go along with a 2-1 lead.

“I kind of saw a loose puck, and I think it was Eddy (John Edwardh) had a nice net-drive there which pushed their D-men back,” said Mueller. “I just tried to put it on net, and fortunately it went in.”

Six minutes later, Edwardh got the puck on his backhand in front of the net, and made a beautiful spin move to get it onto his forehand and fire past Demko to give UMass Lowell the 3-1 lead and some much needed breathing room.

The River Hawks continued to press in the final minutes in search for another goal. Dylan Zink was put in the box for interference with 1:39 left in regulation, which gave the Eagles a 6-4 chance after they pulled Demko. UMass Lowell goalie Kevin Boyle turned away a few shots, but the River Hawks continued to display a physical defensive style they were able to maintain all game.

“They were quick and very very strong tonight,” said Boston College coach Jerry York. “They had a good forecheck. That forecheck really prevented us from coming out of our end smooth.”

White got the River Hawks the lead midway through the first when he buried an opportunity after a rebound found him on the opposite end of the crease. Both teams played a defensive first period, as the shots were tied at just five heading into intermission.

The Eagles answered four minutes into the second period when Alex Tuch rocketed one past the blocker of Boyle. Each team benefited from a power play, but neither was able to convert on the man advantage.

While the opponent is not yet known, finishing fourth in Hockey East guarantees UMass Lowell will have a home series come the weekend of March 11-12. The River Hawks have returned to the Tsongas Center after opening-weekend road losses this season to record huge bounce-back wins against high-ranking teams such as Providence, Boston University, and now Boston College.

The River Hawks have had their greatest success playing in front of the UMass Lowell faithful this season, and, with tonight’s clutch win, have earned the luxury of doing so at least twice more.