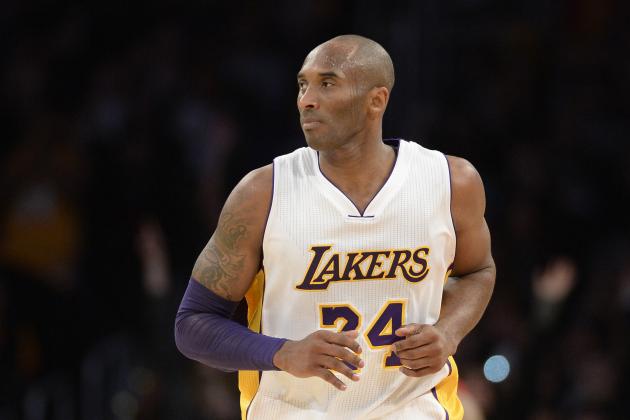 NBA superstar Kobe Bryant will retire at the end of the 2015-16 season. (Richard Mackson/USA Today Sports)

‘Question: “What’s the thing you hate the most about the farewell tour?”

~Kobe Bryant, when asked about his final season

You know what, Kobe? You have a right to believe that your team is horrible, but ask yourself this:  Don’t you think that maybe…just maybe…that’s partially your fault? This isn’t to take away from what you’ve done, mind you. And how can it be? You have way too many accolades to fit into 25 words or less, chief among them being five NBA Finals championships. You’re one of the NBA’s marquee names, and will undoubtedly go down in history as one of the league’s all-time greats. Without question, none of your accomplishments are anything to sneeze at.

This isn’t to take away from what you’ve done, mind you. And how can it be? You have way too many accolades to fit into 25 words or less, chief among them being five NBA Finals championships. You’re one of the NBA’s marquee names, and will undoubtedly go down in history as one of the league’s all-time greats. Without question, none of your accomplishments are anything to sneeze at.

All that being said, none of that should absolve you from being the reason that the Lakers, as you so eloquently put it, “suck.”

It all starts, and ends, with that gaudy contract of yours. 48 and a half million dollars to stay with Los Angeles for two years? And leaving the Lakers with barely enough money to bring in a decent free agent? I’m not saying you don’t deserve that kind of money. In any other situation, I’d say you’re absolutely worth that much. But considering the Lakers’ salary cap at the time you signed that contract, it’s a horrible move to make in the long run.

I know it’s something you’re likely tired of hearing, but you have to face the facts: You’re old. You can’t win games by yourself. You needed a strong supporting cast around you if you were going to get far. Signing a contract that eats up a sizeable chunk of salary cap space doesn’t help that. What I’m saying is, sometimes for guys like you, less is more.

Look at Tom Brady, for example. I know that it’s two different sports we’re talking about, but the general idea of salary cap management still applies. Like you, Brady is getting long in the tooth, and not getting any younger. Did he demand that the New England Patriots sign him to ridiculously high contracts? No, he took a pay cut so that the Patriots could sign guys that could potentially help them win.

If you want to keep it within the NBA, there’s a decent list of players we could talk about. Tim Duncan, Dwayne Wade, LeBron James, Dirk Nowitzki, all of them took smaller contracts to help give their teams a chance at a championship

But you’re clearly not like that. The Stephen A. Smiths of the world may praise you for your leadership, but they seem to forget that one detail. (Either that or they’re letting your accomplishments blind their judgment.) The Lakers could be in contention for a playoff spot right now if you left the front office some money to lure a solid free agent to Laker Land. Heck, you’d be in contention if you actually worked with what you have right now.

But I’m not going to hawk on your on-court leadership, even if that’s a whole other argument in and of itself. I will, however, reiterate this argument. Part of the reason why the Lakers are where they’re at right now…and for the past few years, for that matter…is at least partially your fault. Yes, Jim Buss was the one that offered you the contract, but you were still the one who accepted it. Thus, you’re also at fault here. Had you not taken that contract, or at least accept a smaller one, none of this would be happening in the first place. But here you and the Lakers are, hanging out at the bottom of the Western Conference and on the outside looking in again.

Kobe, all I’ll say in closing is this: You’re a great player, but you could’ve been so much more if you thought more about your team’s future and less about yourself. Think about it.