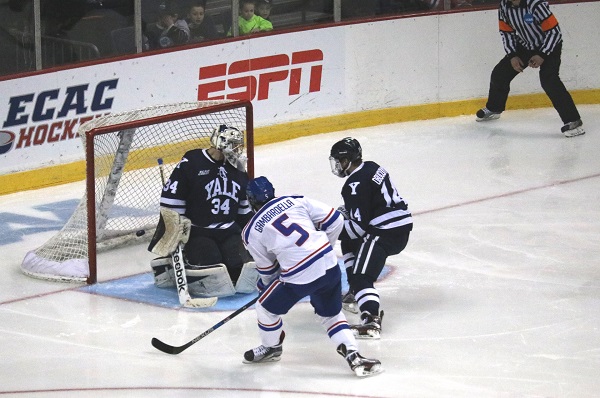 ALBANY, N.Y. — The UMass Lowell River Hawks had a surging third period, in which they overcame a one-goal deficit and scored an overtime goal to defeat Yale 3-2 in the NCAA East Regional Semifinals Saturday night at the Times Union Center.

Overtime hero and assistant captain Joe Gambardella credited the win to the River Hawks’ “never give up mindset.”

Despite striking first 4:27 into the game, the River Hawks struggled to hold back an aggressive Yale team. The Bulldogs took advantage of UMass Lowell’s lack of puck awareness to steal possession and create dangerous scoring chances.

During the opening minutes of the third period, especially, UMass Lowell seemed to be lost on the ice, missing passes and losing track of the puck in transit.

These mistakes led to Yale breakaways, a notable example being one that could have resulted in a go-ahead goal for the Bulldogs had the puck not sailed off of the goal post and out of danger.

The game was incredibly tight from the start to the finish; this victory was not an easy one for the UMass Lowell. Yale engaged them in neutral zone duels that resulted in back and forth play through much of the game, although the River Hawks eventually gained dominant puck possession in the first half of the second period.

The scoresheet did not reflect the chippy play that was displayed by both teams throughout the game. Numerous scoring chances resulted in scrums and heated exchanges in front of the net. None of these resulted in penalties.

In fact, there were only four penalties issued throughout the entire game. Two to Yale, two to UMass Lowell. All of them were in the first period.

UMass Lowell’s power play struggled tonight regardless of its lack of penalties, as they were unable to produce on a 5-on-3 advantage early in the game that could have stretched their lead to two.

Head Coach Norm Bazin noted that the momentum went back and forth between the two teams. This certainly was evident in the ways that UMass Lowell and Yale continually picked each other off and were pains in each other’s backsides throughout the game.

But in the third period, the River Hawks fought back an aggressive Bulldog team and gained momentum on a beautiful tying goal. Gambardella streaked the puck across Yale’s blue line and passed it to sophomore forward C.J. Smith, who put a shot on net that baited Yale goaltender Alex Lyon out of his net enough for Gambardella to bury the rebound in the empty net.

“We were joking around in the locker room,” Boyle said of the locker room mindset before the overtime period. “Trying to get it done faster than last weekend,” when the River Hawks played three periods of overtime in a crucial victory over Providence College.

In the end, Joe Gambardella scored perhaps his second biggest goal ever when he buried Yale’s playoff dreams with an assertive goal 1:27 into overtime. He was humble, although not dismissive of the value that it had, and credited the goal to his linemates, and to defenseman Chris Forney in particular, who had started the play.

UMass Lowell will face Quinnipiac Sunday night in the regional final at 7:30 p.m. The winner will join Boston College, North Dakota and the Ferris State-Denver winner in the Frozen Four in Tampa, Fla. April 7-9.