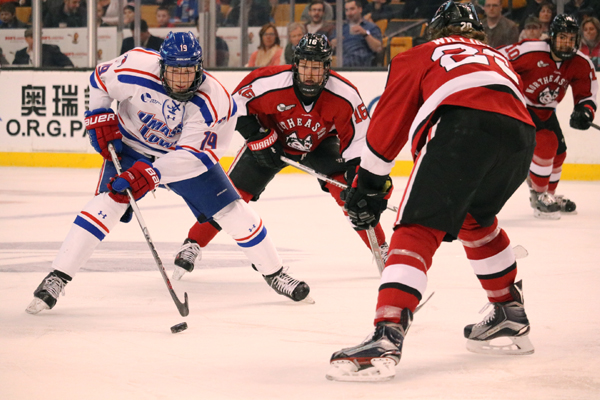 Playing a triple-overtime game the night before certainly did not help their legs, but that was not to be used as an excuse. The River Hawks simply ran into a buzz saw Northeastern team that could not be stopped.

Zach Aston-Reese’s third-period power play goal gave Northeastern a lead they would not relinquish, and the Huskies finished their regular season going 20-1-2 in their last 23 games to capture the Hockey East Championship with a 3-2 victory over UMass Lowell.

“Winning the Hockey East Championship is completely the honor, so congratulations to Northeastern,” said UMass Lowell head coach Norm Bazin. “Good teams like that make you play out of your own game sometimes. Our special teams was not good enough. Our execution was a little off, and I didn’t feel we had the energy need in order to have success.”

The difference came on special teams, where the Huskies scored two of their three goals on the power play while the River Hawks went o-3 on the man advantage.

UMass Lowell goalie Kevin Boyle stopped 21 shots and was named to the Hockey East All-Tournament Team as well as awarded the tournament’s MVP.

“I think a championship would have felt better,” said Boyle. “It just wasn’t our night. Northeastern played a hell of a game and congrats to them.”

The River Hawks showed their fatigue defensively from last night’s marathon game early in the game. Just a minute into the contest, Northeastern found themselves on a 3-on-2 break. The River Hawks did not get back quick enough on the backcheck, and three quick passes left Husky Adam Gaudette a wide open net to score on.

UMass Lowell responded two minutes later when John Edwardh scored his fourth goal of the season. Edwardh corralled the puck deep in the offensive zone, and snuck it over the shoulder of Northeastern goalie Ryan Ruck. The Huskies would respond midway through the first period on a powerplay when Nolan Stevens got one past Boyle in front of the net through traffic.

“There are several things that we didn’t adjust to as quickly as I would have liked,” said Bazin. “I think the biggest thing is that when the fatigue happens, your game breaks down a bit. I thought that was most apparent to me as a coach. We couldn’t make the adjustments quickly enough throughout the game.”

The River Hawks came out strong in the second period, out-shooting the Huskies 11-8 and coming away with the better scoring chances. Midway through the second, Adam Chapie put home his 16 goal of the season to tie the game up at 2-2. Chapie got the puck behind the Northeastern net and made a nifty wrap-around move to somehow squeeze it behind Ruck.

Northeastern was able to kill off a UMass Lowell power play late in the second, and the two teams went into the second intermission with the score knotted at 2-2.

UMass Lowell pulled Boyle with just under two minutes to play, but they were unable to register the tying goal during the 6-on-5 time.

The River Hawks have now lost two consecutive Hockey East championship games, but unlike last season, the 2015-16 campaign is all but guaranteed to continue to move on to the NCAA tournament.

“We have to take the positives out of this,” said Bazin. “We get to play more hockey, and we get to play for a national championship. I’m really proud of the kids in that room. That’s a lot of hockey they played last night. That’s not an excuse, don’t get me wrong. It’s a fact of not having enough energy the following day is all. Northeastern was the better team today, and that’s why they won. However, playing for the regional is going to be exciting, and I’m sure our guys are looking forward to it.”

The River Hawks now await to see who their first-round matchup will be in the NCAA Tournament which will be announced Sunday at noon during the NCAA Selection Show on ESPNU.