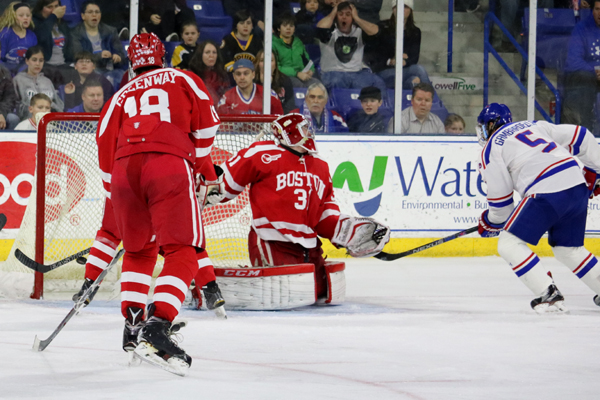 Joe Gambardella scores off an assist from C.J. Smith (not pictured) to tie the game at 1 in the second period Friday night at the Tsongas Center. (George DeLuca/Connector)

The River Hawks (22-8-5) are one win away from returning to the TD Garden for the Hockey East semifinal round for the fourth consecutive year.

Sophomore C.J. Smith tallied assists on all three of the River Hawks’ goals to add to his team-leading 35 points, including a pass which set up Gambardella just outside the BU crease. Gambardella’s goal was a quick response to Jakob Forsbacka-Karlsson’s for the Terriers 2:36 prior.

On the other side of the puck, the River Hawks successfully killed two consecutive first-period penalties to keep the special teams advantage in their favor, which was a deciding factor in the game according to BU head coach David Quinn.

“At the end of the day, that was the difference,” said Quinn. “Our penalty kill let us down, and it’s going to have to get better tomorrow night if we want to have a chance to extend this series.”

BU outshot Lowell 35-19 in the game, but that was not a cause for concern for neither UMass Lowell head coach Norm Bazin nor goalie Kevin Boyle.

“I think when you get to see a good amount of shots, you get comfortable in the game,” said Boyle. “The shots that they did have, our team did a great job of keeping them to the outside and letting me see [the puck], so kudos to the team for letting me see it.”

Bazin, however, called the first period a rusty start after being outshot 11-5 in the first 20 minutes of the game and a power play opportunity that did not yield a shot on goal.

Sophomore Michael Louria scored with 8:25 left in the third period to put the River Hawks up 2-1. His goal came in the high slot from what he called a great pass by senior forward Michael Fallon.

“I just tried to squeak a shot through and I think it hit off the stick or something – it went low blocker – but I was lucky to get that bounce,” Louria said.

Senior forward Adam Chapie’s power play goal minutes later gave UMass Lowell a 3-1 lead, but BU senior defenseman Matt Grzelcyk answered 33 seconds later with a shot that deflected off a River Hawk defender past Boyle and into the net with 4:15 left in the third period.

The Terriers pulled Sean Maguire with less than 1:40 to play but could not generate enough offensive push with the extra skater to tie the game.

The River Hawks and Terriers return to the Tsongas Center for game two of the best-of-three series Saturday night. Puck drop is set for 7 p.m.