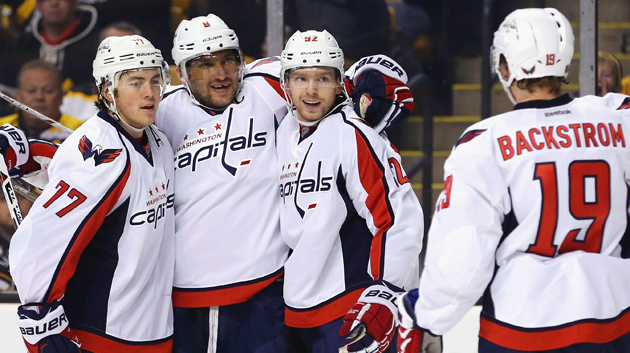 The Washington Capitals head into the 2016 Stanley Cup playoffs with 120 points and no intention of falling victim to the Presidents’ Trophy curse. (Photo courtesy of Maddie Meyer/Getty Images).

The 2015-2016 National Hockey League season has been far from predictable. After beginning the season with a 9-0 record, the Montreal Canadiens ended up missed the playoffs after a series of injuries robbed them of their top talent. The Florida Panthers had a Cinderella run of a season, defying all expectations to finish atop of the Atlantic Division.

The Western Conference continued to be the stronger of the NHL conferences. In fact, the western playoff series were set before any other eastern team besides the Capitals earned playoff berth. This did not reflect well on the Eastern Conference, but at least they have the Washington Capitals to prove that there’s something other than mediocrity and mild disappointment.

In the Eastern picture, it seems as though it will be the Capitals’ stomping ground, unless they run out of steam somewhere along the way, or goaltender Braden Holtby is facing into an even hotter goalie on another team.

The West, however, is a big question mark. Dallas sits atop both the Central Division and the Western Conference with 109 points, but there’s a legitimate chance that either St. Louis or Chicago could steal their thunder. Provided that the Blues don’t choke for the third year in a row, of course.

Detroit is the weakest team coming into the playoffs. Tampa may have lost Steven Stamkos to a grave health issue, but they possess offensive depth that Detroit will have to try and match. If Lightning (though not for long, probably) forward Jonathan Drouin continues his ironic hot streak, in true dramatic fashion, then Detroit will have to step up its own offensive game and pray that rookie Dylan Larkin is on his game. The Red Wings may have snagged their 25th straight playoffs berth, but they only did so because the Boston Bruins dropped the ball in their final regular season game. It’s Tampa’s series to lose.

The Flyers are riding off a fairly successful season, considering that their primary aim in 2015-2016 was to rebuild. But with rookie defenseman Shayne Gostisbehere making a fairly convincing Calder case for himself, and goaltender Steve Mason having his own revelatory campaign, the Flyers flew into a wild card spot. Unfortunately, they will not be having a happy underdog story against the offensive behemoth that is the Washington Capitals. If the Flyers don’t get swept, it will have been a pretty good series for them.

The Rangers and Penguins are neck in neck in the standings. The Pens have only three points over the Rangers. While the Rangers still have Henrik Lundqvist playing well as their goaltender, the Penguins boast more explosive offence. Penguins captain Sidney Crosby is turning heads with an assertive season overall, considering that he was pointless in the first five games of the 2015-2016 season. A major problem for the Penguins is that the status of goaltender Marc-Andre Fleury is unclear. Nevertheless, I expect that this will be a captivating series, and hope that it goes to seven games, just for the drama of it all.

The Islanders will need to be consistent in order to beat the Florida Panthers and avenge their untimely exit from the playoffs last season. Captain John Tavares continues to be a star for the Isles, boasting a 70 point season. Unfortunately for the Islanders, goaltender Jaroslav Halak is still out with a groin injury, and defenseman Travis Hamonic is still uncertain for first round play. The Panthers will definitely capitalize on any weakness that the Islanders show. While much of the buzz surrounding the Panthers is to do with rising stars Aleksander Barkov and Aaron Ekblad, they also employ incredibly talented veterans who still pack a punch. The Islanders need to be on their toes if they intend to stop Jaromir Jagr from grabbing his third Stanley Cup.

I will be brief with Western Conference predictions–it could literally go any way. Minnesota could embark on a Cinderella run and somehow beat the Dallas Stars, or Dallas could slaughter the Wild, who are missing forwards Zack Parise and Thomas Vanek indefinitely.

I expect that Chicago’s strong offense will most likely overpower St. Louis, so Chicago’s best hope at their fourth cup is that Minnesota somehow pulls off a miracle and bests Dallas.

Anaheim will probably stick to its usual playoffs formula by beating Nashville and completely falling apart in either the second round or the Western Conference final. It will be disappointing, but rather familiar. Nashville needs to use its young guys effectively for any hope at taking a series against the Ducks.

As for the Kings and the Sharks series, I have a feeling that Los Angeles will overtake the Sharks in a stunningly similar fashion to the 2014 playoffs. I refer, of course, to San Jose taking a commanding 3-0 series lead only to blow the next four games to the eventual Stanley Cup champions.

The Stanley Cup playoffs will begin tonight as the Detroit Red Wings play the Tampa Bay Lightning at 7:00 p.m. EST.

For viewing times for all of the games, refer to the NHL website.