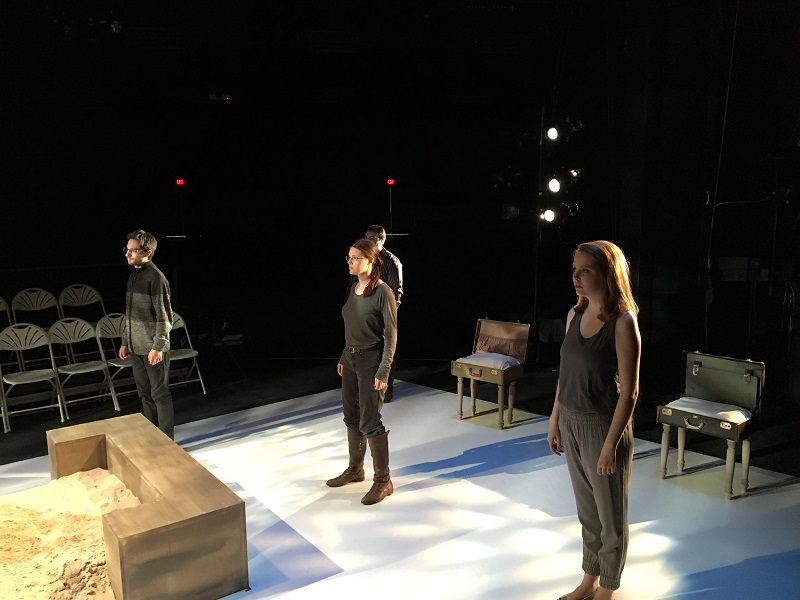 On Wednesday, April 20, actors and stage hands of the UMass Lowell Theatre Arts program held their premiere showcase of the spring semester performance “Refuge” at Comley-Lane Theatre in Mahoney Hall. The 90-minute long performance, directed by David E. Shane, consisted of ten actors who portray the words and personas of authentic individuals who were interviewed during the development of the play in attempts to broaden its audience’s understanding of the term “refuge.”

What is incredibly unique about this play is its use of documentary theatre and devised movement theatre. The actors adopt perspectives from those who have sought refuge, those who have offered refuge, and those who have witnessed it. Through anecdotal portrayal of the interviewed individuals, the production tells the firsthand accounts of people who have experienced refuge of numerous different meanings. Each person is depicted in a manner that reveals his or her emotions, feelings, and personality. Every aspect of the individual is accounted for in these representations, as the actors of “Refuge” do not just play their characters, they become them.

The stage presence of the play contributes greatly to its message. The audience is sat on the stage during the performance, bringing them as close as possible to the people and their stories. The lighting captures the actor at hand as he or she contributes the word-for-word dialogue of another individual. Also on the stage were suitcases, a window frame, and a large collection of sand surrounded by two wooden benches. The props are used throughout the play in various ways as the actors tell their stories and articulate their respective messages.

This play teaches its viewers that refuge is a concept everyone and anyone can relate to. The performance is very good at engaging with the audience, which helps convey its message even more thoroughly. The viewers are, in a sense, invited into this important conversation with the actors as they reveal their stories. The audience is left with thoughts of the original people who have felt the emotions so accurately captured on stage. This play accomplishes its goals in providing a more far-reaching understanding of a very relevant topic as it introduces people to a number of individuals and their respective definitions of the loaded term that is “refuge” while simultaneously telling the fascinating stories of such bold individuals.