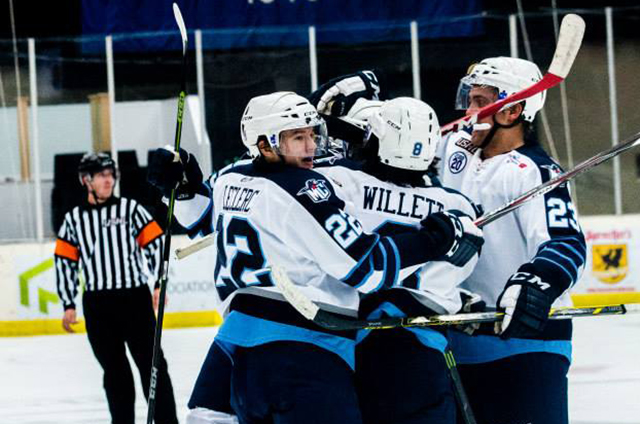 Forward Guillaume LeClerc is one of nine freshmen on the 2016-17 men’s ice hockey roster. LeClerc had 13 goals and 16 assists in 54 games with the Madison Capitals of the USHL. (Courtesy of Madison Capitals)

The UMass Lowell Men’s Ice Hockey Team are looking to build on their success from last season, where they finished one game short of the Frozen Four. Over the summer they lost key players, whether it be to graduation or, in one case, to transfer. The 2015-16 seniors were the River Hawk’s winningest class.This year’s crop of freshmen have a lot to live up to.

Of the nine, three have been selected in the NHL draft. Goaltender Garrett Metcalf was taken by the Anaheim Ducks in the sixth round of the 2015 NHL draft, 179 overall. Forward Ryan Lohin and goaltender Tyler Wall were selected by the Tampa Bay Lightning and the New York Rangers, respectively, in the 2016 NHL draft.

The six forwards, all from scattered locals across the United States save for France native Guillaume LeClerc, will hopefully add a goal scoring flair to the River Hawks, a team that is known for its strong defense and goaltending.

Last season, UMass Lowell offense scored less goals than five other teams in Hockey East despite finishing second in the conference. The River Hawks scored 58 goals in 2015-16, 12 less than the next place up on the statistics sheet, Notre Dame.

A few of the freshmen forwards enter this season with a knack for productivity up their sleeve. Nick Marin, an incoming forward, had 39 points in 44 games with the USPHL’s Springfield Jr. Pics. Colin O’Neill had 55 points in 59 games last season in the AJHL with the Okotoks Oilers. 39 of those 55 points came from assists. In his last season with the Des Moines Buccaneers of the USHL, Kenny Hausinger scored 48 points in 60 games.

James Winkler has been classified as a “pro-typical power forward who goes to the dirty areas of the ice and has a rocket of a shot” on a 2013 scouting report. Coming in at 6’3” and 205 pounds, Winkler is one of the bigger players on the team and could use his size to muscle his way to the net.

LeClerc is one of six freshmen to arrive at UMass Lowell from a USHL team. He had 29 points in 54 games in his last season with the Madison Capitals.

The lone addition to the defense, Mattias Göransson, comes to the River Hawks fresh off of winning a USHL championship with the Tri-City Storm. He served as an assistant captain for his final season there, and will no doubt serve to bolster the already strong defense corps that Head Coach Norm Bazin has built.

Wall and Metcalf’s places on the team roster present an intriguing conundrum for the team. They will be two of the four goaltenders on the team vying for the starting position that has been vacant since Kevin Boyle graduated. The other two goaltenders, Sean Cleary and Christoffer Hernberg, are sophomores with one and a half games of NCAA experience between them.

In 31 games with the Leamington Flyers of the GOJHL, Wall amassed a 1.49 goals against average and a .940 save percentage.

While these do not appear to be as impressive as Wall’s statistics, the USHL is at a higher tier of junior hockey than the GOJHL. Out of the two of them, however, only Wall has playoff experience.

Ultimately, the nine players in the class of 2020 face assimilating into an established and successful roster. While the River Hawks did lose a considerable number of players, there are only so many spots to fill. Goaltending will not be the only position with a fair amount of competition for ice time; there are six forwards in the freshmen class alone, and only 12 forwards are dressed for games.

Coach Bazin takes relatively unknown players and shapes a group into a well-run winning machine. They all play with a common goal: to win hockey games. This crop of freshmen players have the potential to become emblematic of the River Hawks’ style of play in the program’s 50th year.