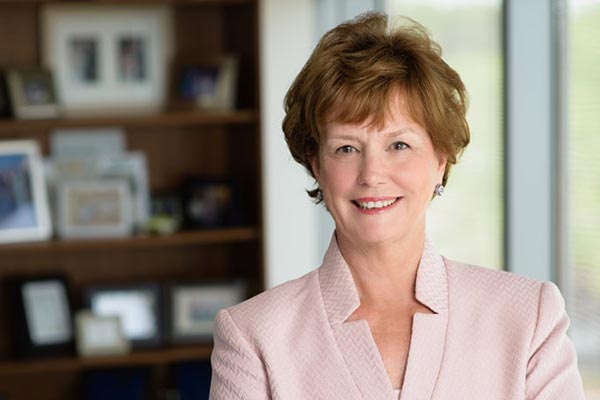 Chancellor Jacquie Moloney has high hopes for the River Hawks this year. (Courtesy of UMass Lowell)

On the fourth floor of University Crossing works one of UMass Lowell’s biggest basketball fans. Though it may not seem apparent in normal conversation, Chancellor Jacquie Moloney has a special place in her heart for the sport.

From the Boston Celtics of the 1980s to the current River Hawk teams, Moloney has an appreciation for the game that knows no bounds. Her first taste of basketball, however, came while attending Tewksbury High School where she joined the girls’ junior varsity basketball team.

Because her involvement on her high school team predated Title IX, which created more equal opportunities for girls and women to play sports starting in 1972, Moloney said she greatly appreciated the chance to explore her interest in basketball at the time.

“You have to remember there was no Title IX when I was growing up,” she said. “Girls definitely weren’t even encouraged to throw a ball. Literally.”

For Moloney, even more important than playing basketball was the prospect of being on an athletic team.

“It was a game-changer for me to be able to be on a team, and it made me appreciate the importance of sports and athletics for everyone,” she said. “When I was on the athletic committee here years later, I remember thinking, ‘Thank God for Title IX’ because women now have an opportunity that I definitely didn’t have.”

Moloney’s playing days did not stretch into college, but her passion for the game hardly waivered for years to come. Her enthusiasm intensified with the rise of Larry Bird and the Boston Celtics in the 1980s. Besides Bird, she says Ray Allen, Danny Ainge and Isiah Thomas are some of her favorite players.

“We were total devotees of the Celtics in the Larry Bird era, my husband and I, [as were] most of our friends,” said Moloney. “Those teams were just so exciting to watch.”

Her interest in the Celtics and the NBA has dwindled more recently in part due to having less free time on her hands as chancellor. Her devotion, instead, has shifted to the UMass Lowell basketball teams due to her heavy involvement on campus.

“Now, I’ll watch the occasional game, but my schedule’s so busy,” she said. “It’s not like I have a lot of nights where I come home and I’m looking for something to watch on TV.”

In the university’s time as a Division II program, along with many other sports, Moloney described the basketball teams as perennially strong units with devoted coaches and alumni, which set a significant foundation for competition at the Division I level. Notable former players and coaches include Akeem Williams, Darlene Orlando-Ciarcia and coach Stan Van Gundy, who is now the president of the Detroit Pistons.

“I think basketball was our go-to sport before hockey. It was a powerhouse for us,” said Moloney. “We’ve got to keep hold of strong coaches who are interested in and concerned about the students because that’s really what builds your future.”

For the current UMass Lowell rosters, Moloney said she is ready to see the men’s squad break out into the upper echelon of America East competition and the women’s squad make progress toward the same goal in the fourth and final year of their Division I transitions.

“Basketball is an extraordinary game, and anything can happen, especially in Division I America East basketball,” Moloney said. “I think we showed very well last year, considering it was only our third year.”

In regards to the basketball programs expanding on campus, Moloney said she appreciates the talent of the coaches and the character of the student-athletes they recruit. While there is competitive talent on the both rosters, Moloney stresses the impact of high-quality coaching as well.

“Obviously, we take our greatest pride, first, in our students, but you can’t recruit high-quality students and good citizens unless you have good coaches,” she said. “The coaches are everything. It starts with them; they set the bar, and I think both Jenerrie [Harris] and Pat [Duquette] set a very high bar for their players.”

In addition to moderate success for the teams in Division I play to this point, Moloney looks ahead to when the basketball teams are full Division I programs in 2017-18. Not only will they be eligible for conference and national postseason tournaments, but the men’s team may also host an America East tournament game if they finish in the top four of the conference next year under the current format.

To host a postseason game, Moloney said, would be “fantastic for UMass Lowell.”

For now, though, the chancellor looks to take her love for basketball at UMass Lowell one game at a time.

“[There is] no crystal ball. Just a lot of hope and excitement, and that’s the great thing about the game,” said Moloney.