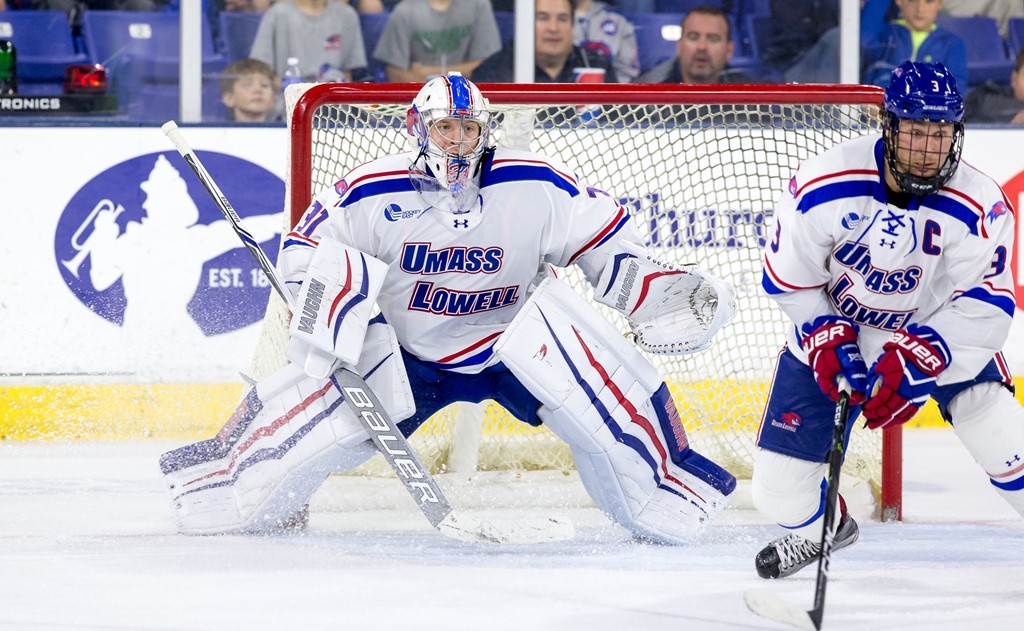 Freshman goalie Tyler Wall has proven that he is up to the task of helping carry the River Hawks to another successful season. (Courtesy of UMass Lowell Athletics)

After starting the year as the eighth-ranked team in the nation, the UMass Lowell hockey team has found itself as high as number three and as low as number nine. Although the consistency is lacking, head coach Norm Bazin and the team have as good a chance as anybody in the nation to reach the Frozen Four.

This season has featured four goaltenders, nine freshmen and countless points for their top line, but now with Hockey East play starting to heat up, let’s take a look at the first 18 games of the season.

The opening weekend had a couple of questions waiting to be answered. Who will the starting goaltender be? And how will this young team fare against the fifth-ranked team in the country, Minnesota-Duluth? Both of those questions were answered, but the result of one was bittersweet.

The River Hawks ended the series with two ties. Although they did not lose, both games felt like losses. In both games, the team gave up third-period leads and left the games on the table. The stalemates, although underwhelming, showed everyone that this team deserved to be at the top and that they had a goalie to take them there in Tyler Wall.

Sitting currently at seventh in the country and second in Hockey East, Tyler Wall deserves a lot of that credit. Behind a 9-3-1 record, the freshman has a goals against average of 2.08 and a .918 save percentage, good enough to be top-12 in the country in both categories among goalies that have played in at least half of their team’s games.

After Minnesota-Duluth, the River Hawks played well against the rest of their out-of-conference opponents, tallying a record of 4-2-0. Colorado College, St. Lawrence, Clarkson and Nebraska-Omaha were on the list of competitors. But after a challenging schedule outside of the conference, they started to play the games that mattered most – the ones within Hockey East.

Starting out by winning four of their first five, things started to click for the boys in blue. A sweep of Vermont followed by splits with Maine and Notre Dame showed the country that this team is complete, but could they beat UConn?

Going into the weekend series with the Huskies, the River Hawks knew they had to break a trend dating back to the 2014-15 season. They needed to beat UConn who had won the last three contests, but they could not get it done.

The Huskies, a team that UMass Lowell should beat nine times out of ten, won the first game before game two resulted in a draw. Something about that series felt off to me. My hatred for UConn aside, that is a series that you’re supposed to sweep with ease. If I was mad, I know the team had to be fired up – and the next series against Merrimack proved just that.

UMass Lowell took both games against Merrimack, outscoring the Warriors 9-2 to improve their overall record to 10-5-3 and conference record to 6-3-1, and that is where we are today.

Currently ranked seventh in the country and sitting firmly in second place in Hockey East, the River Hawks have 16 games left on their schedule with 8 out of their last 11 coming against NCAA tournament teams. The road to Chicago will not get any easier for this team, but the line of C.J. Smith, Joe Gambardella and John Edwardh should carry the load for the hopeful River Hawks.

The 60-point total that the line has produced makes up for 36% of the teams total points. It is great to have a line that can score at will, but what happens if they have an off night? Other people need to step up, and with a freshman-heavy team, who is that going to be? Watch out for Ryan Lohin and Kenny Hausinger.

Both freshman, Lohin and Hausinger have combined for 15 points thus far and have been factors all season long. Lohin was off to a hot start with six points over a five-game span at a point in the season, where Hausinger has tallied three points in his last two games. The numbers might not be overwhelming but the two have combined to miss only two games this year, meaning they have Coach Bazin’s trust, which, rumor has it, is harder to gain than Tom Brady’s.