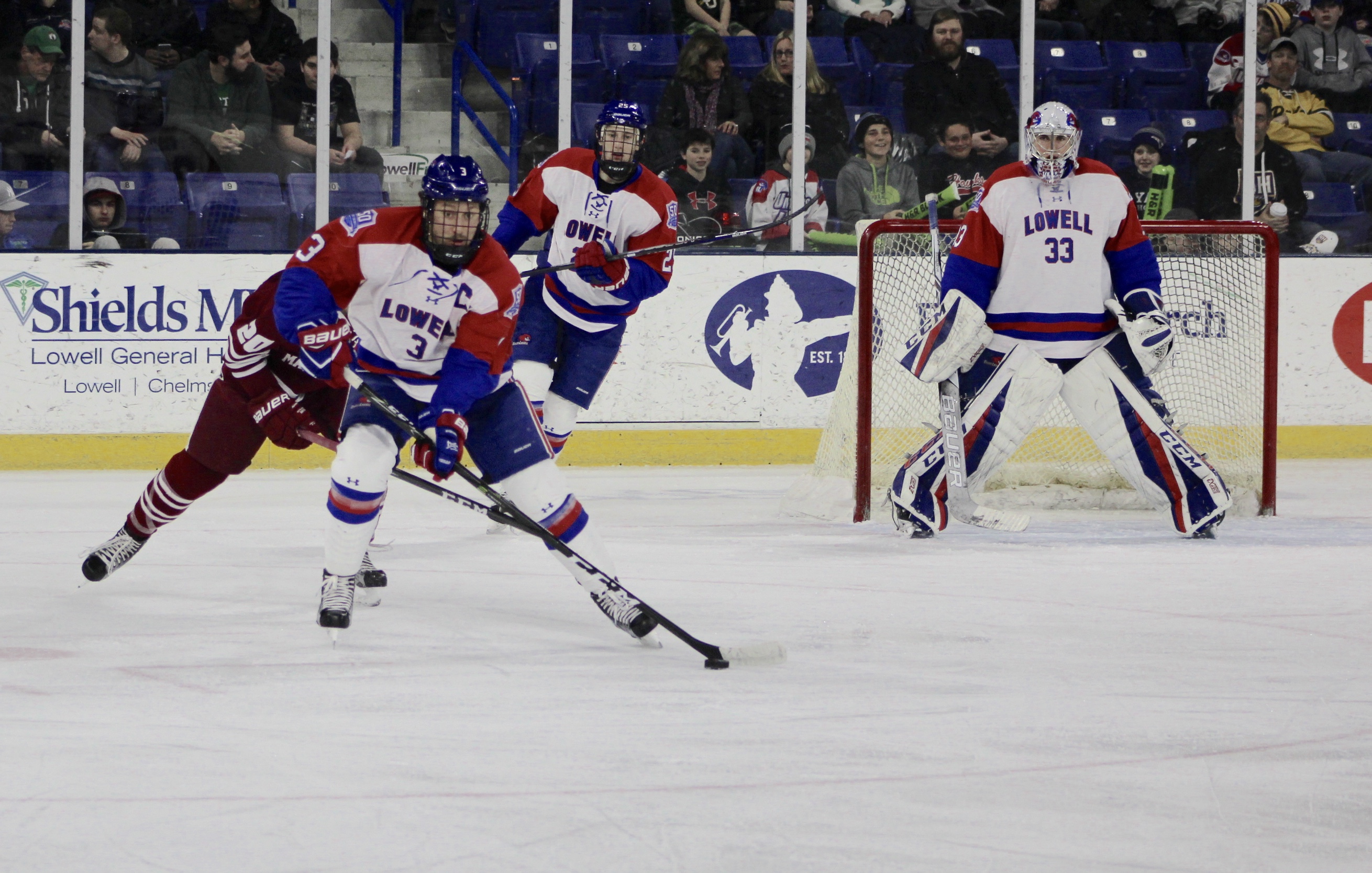 Four different River Hawks found the back of the net in the contest.

The win awarded the River Hawks the Alumni Cup, which they have won the last five years. It is awarded to the winner of a three-game series between these two teams, as they are the only Division I hockey programs in the University of Massachusetts system.

The game was evenly matched until the momentum of the game turned in favor of the River Hawks following three Massachusetts penalties in the third period.

The most prominent of which came from senior forward Ray Pigozzi who received a major five-minute penalty for boarding as he sent UMass Lowell junior defenseman Tommy Panico into the boards.

Panico struggled to get back up, at which point the penalty was called. As Pigozzi contested the call, he received an additional ten-minute penalty for game misconduct. At this point, the River Hawks were able to take this opportunity to score two goals.

The River Hawks only scored one goal in the first period, but not for a lack of effort. The team had 18 shots on goal, while Massachusetts only had 7.

UMass Lowell senior defenseman Dylan Zink scored the first goal directly off a pass from Gambardella. Junior forward CJ Smith was also credited with the assist, adding onto his and Gambardella’s growing tally of points, as both are the only current River Hawks with over 100 career points.

The goal was reviewed by the referees who determined it was good, giving Zink his tenth goal this season. He leads the River Hawk defensemen in points with 28.

Massachusetts soon followed with a goal from freshman forward Niko Hildenbrand. There was some confusion regarding the goal and it was also reviewed, but it ultimately counted.

Massachusetts’ goaltender Alex Wakaluk had 17 saves in the first period, only allowing the one goal. UMass Lowell’s freshman goaltender Tyler Wall had six saves for UMass Lowell during this period.

The second period started off much slower with a lot of back and forth action. The River Hawks continued to pressure the Minutemen, but their defense was holding strong.

It was not until the 9th minute and after multiple shot attempts that senior defenseman Michael Kapla scored during the River Hawks’ power play to take the lead 2-1. Smith was again credited with the assist, as was freshman defenseman Mattias Göransson.

Massachusetts came back to tie the game with a goal from forward Jack Suter in the 14th minute of the second period.

UMass Lowell received a penalty in the 18th minute for too many men on the ice. Göransson was called for tripping soon after, but Minuteman Ray Pigozzi was also called for embellishment. Despite power play opportunities for both teams, neither was able to score.

The third period began much like the second, and had a steady pace until the halfway mark.

UMass Lowell had many long shot opportunities, but it was a goal at the corner of the net by Gambardella that allowed the River Hawks to take the lead. Smith received his third assist of the night and junior forward John Edwardh gathered his first.

“We approach every game like we’re playing the top team in the country and that’s how today went. We came to the rink today prepared and ready to attack, and I thought we did a good job,” said Gambardella regarding his and the team’s performance.

With no further scoring, Wall ended the game with 16 saves to earn his 18th win, while Wakaluk had a total of 35 saves, but ultimately they were not enough.

The River Hawks will not play again until Saturday, Feb. 18 where they will face Massachusetts in Amherst.