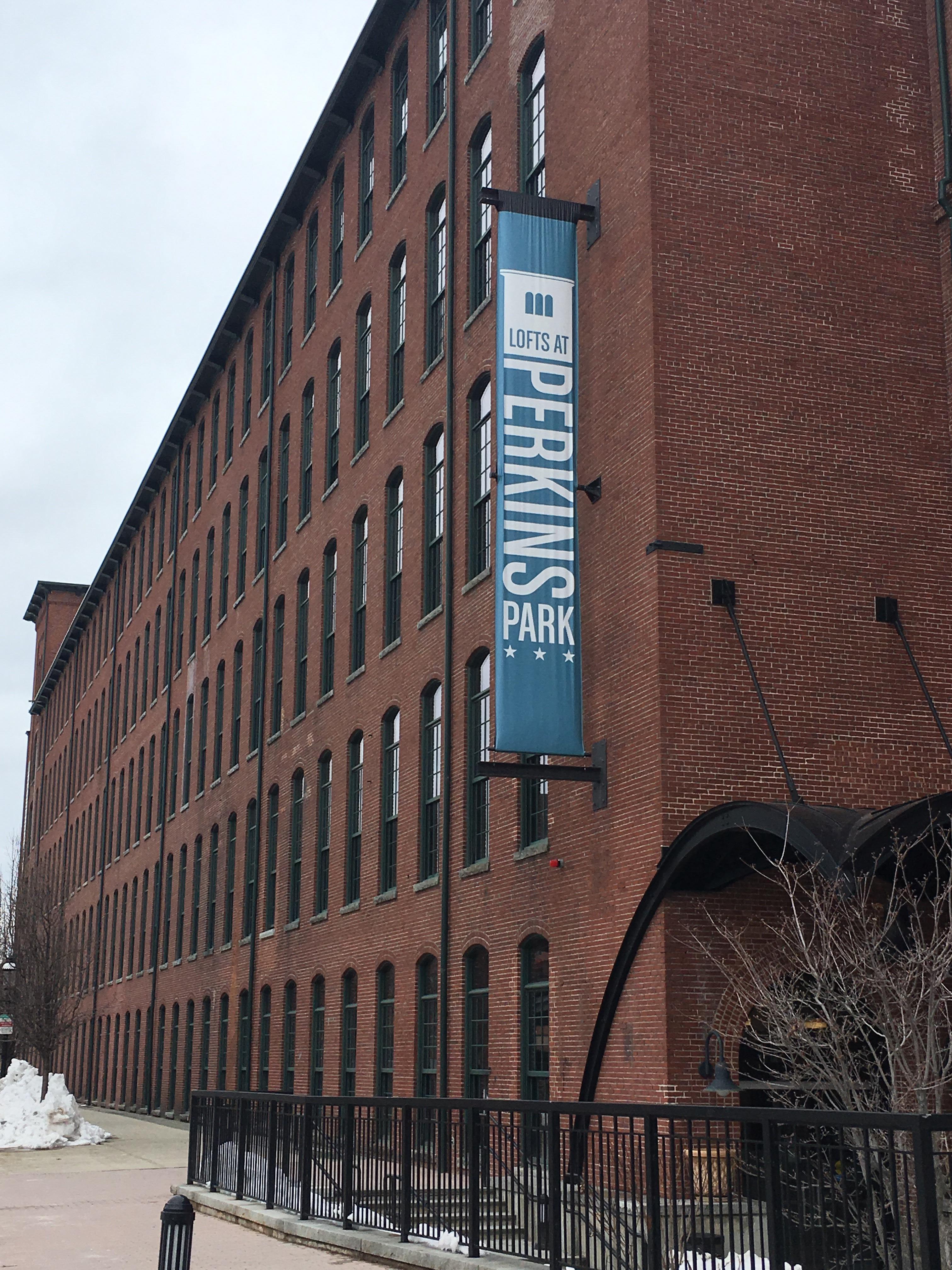 The Perkins complex has become of high interest to residential students next year. (Taylor Carito/Connector)

“I believe that the Perkins Complex is a great addition to UMass Lowell. It provides students with affordable luxury housing, and many colleges do not offer buildings nearly as nice as Perkins,” said freshman Kevin Lucey.

In July of last year, UMass Lowell made a massive purchase between East Campus and the Tsongas Center: the Residences and Lofts at Perkins Park.

The over $60 million purchase was made in an effort to increase the university’s ability to house residents in affordable, luxury living spaces.

“The acquisition of the Perkins properties and the nearby parcel that will house the university’s new Aiken Street recreation fields unifies the East Campus as the heart of student life and activities and is key to the university’s transition from a regional commuter school to a major research university and residential campus,” said UMass Lowell Director of Planning and Development, Adam Baacke.

UMass Lowell’s newest on campus living addition is made up of apartment style-living in renovated mills and a series of townhouses on Aiken Street, across from University Suites.

The Perkins complex will house student athletes, the Upperclassmen Hall of Justice LLC and various other student populations. Members of the student body who look to reside there in the Fall 2017 semester when they open have been given the opportunity to tour the facility, and provided rave reviews.

“I had the opportunity to tour and I immediately loved the building. I believe it has a lot to offer future students who live there. I plan on living there next semester as it is an affordable option, and it provides great amenities for students,” said Lucey, who is currently signed up for the Upperclassmen Hall of Justice.

However, the purchase is not optimal for the city of Lowell itself. UMass Lowell’s purchase of the facility for student housing displaces the large number of tenants currently living in the Lofts and Residences at Perkins Park. All residents were notified prior to the purchase that they would be forced to relocate in the coming months.

Initially the purchase made waves in the city, and City Manager Kevin Murphy made several frustrated statements to local media. However, the university did assure that in the nearly one year that has passed since the acquisition they have made many efforts to smooth out cooperation and communications with the city.
“University officials have been in regular communication with the city manager and other city leaders regarding the announcement of the Perkins acquisition,” said Baacke.

The student body at UMass Lowell are also aware of the impact their new housing situation will have on their host community and its residents. Many expressed their sympathies and best wishes to all who would displaced by the purchase.

“During the tour, I did think about the implications of the purchase on the current Lowell residents in the Perkins complex, and it seems like a complicated situation. I would hope they have been aided in finding a new place of residence,” said freshman Dina Chaves.

In the months since the initial purchase the university has also made various key moves in assisting the Perkins residents in their relocation efforts. UMass Lowell details these efforts on their website, citing their hiring of a “Relocation Consultant” for the tenants, and proving them with “down payment assistance.”

University officials wanted it to be clear that in an effort to continue expanding and renovating UMass Lowell to provide the best for students they would not lose sight of their position in the host community of Lowell. With the opening of UMass Lowell’s Perkins complex fast approaching in the fall, the university continues its effort to ensure relocation for those residents displaced in the past year.

“The university is extremely sensitive to the impacts this transaction has had… [we are] working closely with these residents to support and assist with their relocations, including reimbursing their moving costs and providing additional payments to help cover the other costs associated with their moves to replacement housing. To date, nearly 70 percent of the former residents have moved out of the Perkins Park apartments. Many of these have chosen to stay in Lowell and a substantial number have purchased homes,” said Baacke.