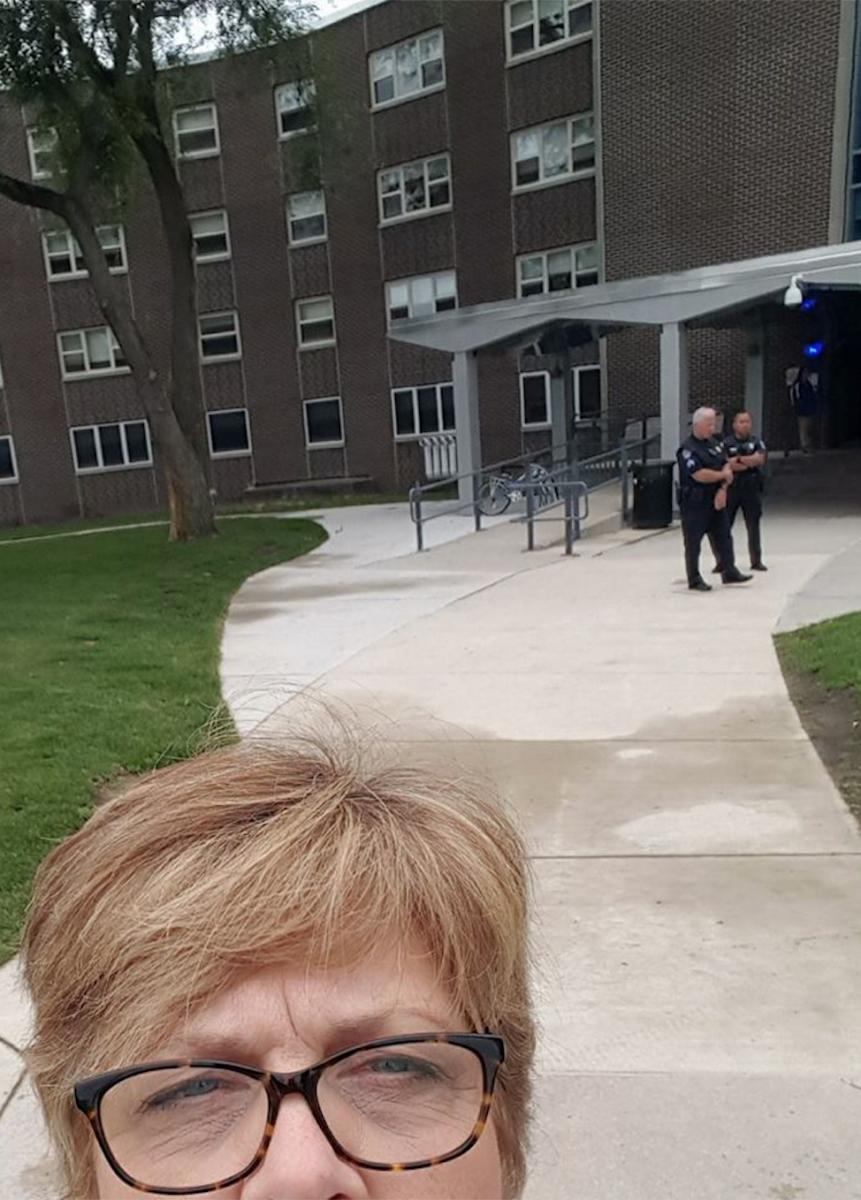 Tess George, secretary of Union of Adjunct Faculty, responding to police response against adjuncts on July 27. (Courtesy of Tess George/Facebook)

During Homecoming festivities on Saturday, Oct. 14, some of UMass Lowell’s adjunct faculty distributed informational flyers in front of the Tsongas Center, and the situation became tense quickly.

While an adjunct and university police officer exchanged civil words, an unidentified student came up and began to heckle the officer. The student taunted and blew kisses at the officer, which led to a confrontation between the two. As the student took out his phone and began to record, standing in the middle of the road in front of the building, the officer asked him to leave the premises.

“It’s like [campus police does not] really quite understand the First Amendment,” said the adjunct professor who was speaking to the officer.

For adjunct professors, tension is par for the course when protesting what they believe to be unfair standards given to them by UMass Lowell.

While distributing flyers to incoming freshmen on July 27, the adjuncts were told by campus police to stop giving out papers to students.

“In the state that has led the nation in expanding health insurance access,” the informational flyer said, “one of the top public universities treats half of its faculty no better than McDonald’s or Walmart.”

Adjunct faculty at UMass Lowell typically teach freshman and sophomore students and get paid less per course than all of the other schools in the UMass system by almost half.

“We’ve been in negotiations for two years and the university is not budging at all,” said Ellen Martins, the president of the adjunct faculty union at UMass Lowell. Martin has worked at the university for over 30 years in an adjunct position in the music department.

Frustrations have come to a head between the adjunct union and the university.

“We have people who have been teaching four to six courses a semester and they don’t get any health insurance,” said Martins.

The union’s goal is parity with the other adjunct professors at the other schools in the UMass system. As the informational flyer states, raising adjunct’s wages will improve the student learning experience as well.

“We’re willing to move to find a path to parity because I believe… the 500 members [of the union] are doing the work,” said Martins.

Even as tensions rise as seen at Homecoming last weekend, the adjunct faculty are dedicated to their cause.

“We’re not UMass Lite. Our students are not lesser. And it shouldn’t cost the students anything more,” said Martins.

A petition to support the adjunct faculty can be found at bit.ly/umladjunctjustice.