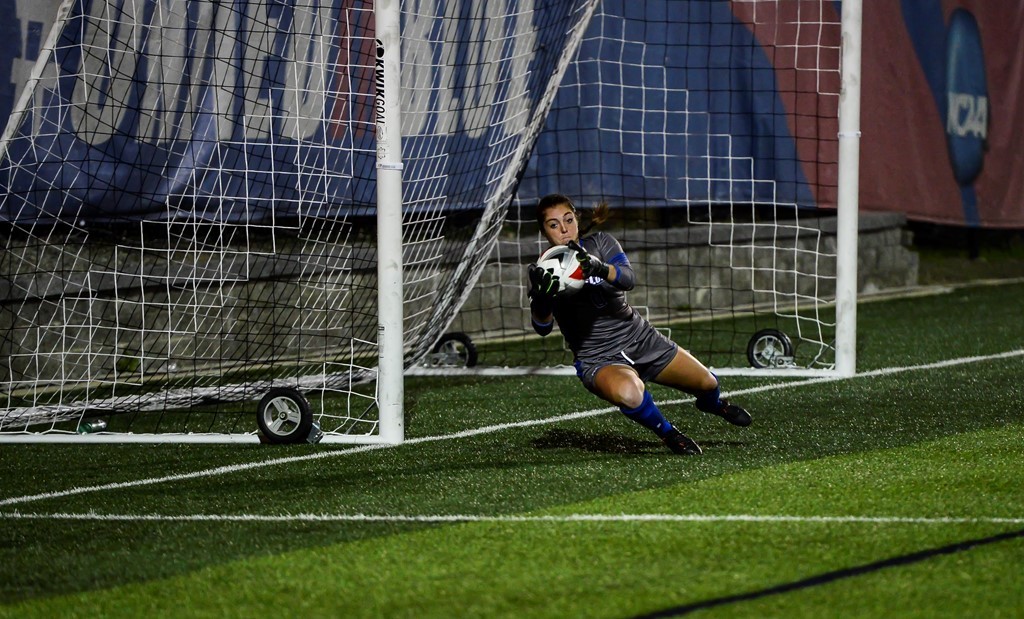 Schneider has made 61 saves this season. (Courtesy of UMass Lowell Athetlics)

Julia Schneider, the standout goalkeeper for the UMass Lowell women’s soccer team, is tired. She just took an early morning exam after returning to campus at 3 a.m. from an away game at Stony Brook University in New York.

The junior, majoring in biotechnology, has found a way to balance soccer and school and she has had some experience in doing so. Since her freshman year, she has been a consistent starter in the lineup and this year is no different. In the 10 games played this season, Schneider has had four shut-outs, leading the team to a 3-4-3 record overall, which is not an easy feat in Division I soccer.

Schneider grew up playing many sports, including tennis and swimming, but soccer was the one that stuck. Thrown in as a goalkeeper at a young age, she enjoyed it and said it was the right fit for her. The growth of the U.S. Women’s National Soccer team in the 2000s encouraged her to aim at playing at a higher level right from the very beginning.

“At the time, there were so many Abby Wambachs and Alex Morgans, like women’s soccer in that sense was really stepping on to the scene, so you just wanted to be pro. When you’re little you just want to do that anyways, but that was a good time for it,” Schneider said. “I definitely knew I wanted to play in college.”

And head coach Frankie D’Agostino is glad to have her on the pitch. He said she is constantly working on improving her game and does not know where the team would be without her. D’Agostino was previously an assistant coach for the UMass Lowell men’s soccer team, and he has seen various of levels of play.

“She never gives up. She is a tough kid. Maybe some of the guys on the men’s team won’t like what I say about this, but she is tougher than anyone I have ever coached,” he said. “She plays through injury and gets into tackles in scary situations without hesitation.”

Schneider, however, attributes her success and the team’s strong record to the coaching staff, comprised of entirely new members from the previous year. Additionally, the closeness of the players has created an even better atmosphere on the field.

“Frankie [D’Agostino] and Mira [Novak] have done wonders for this program, just in the sense of our new way of play and just in us as a team and the way we interact with each other. We’re playing a little bit different and we’re learning new soccer, but we’re also more connected off the field,” she said.

D’Agostino said it was not easy to come in and change the team’s already established mentality of “just kicking the ball forward.” He took a chance trying a new type of soccer, one which most of the athletes were not used to. He and the other coaches asked the players to rely more on the goalkeeper to set up plays and said it is a risk, but one they are willing to take.

Playing more organized as a team and as a defensive unit in the backline has helped Schneider record four games without allowing a goal. They have had equally as many games go into double overtime, three of which ended in a tie and one in a victory. She said that growing into her role as an upperclassman and captain has also contributed to her accomplishments.

“You can see [the team working together] in our communication. We try to keep the ball a little bit more this year. We don’t just hit it long. Actually playing with each other and playing off each other, as opposed to almost panicking and just letting it go, [has helped].”

With seven games remaining in the regular season, the women’s soccer team is keeping their sights set on earning a spot in the America East playoffs, as this is their first season of NCAA eligibility. Despite the hardships of traveling, she and her teammates remain focused, but Schneider understands it is not going to be an easy road.

“We play a new style of soccer that’s more relaxed, more calm; you’re on the ball, but sometimes it can’t be that pretty or that calm. Just winning games [and] just getting where we need to be and then going from there [is the team’s approach].

Even with some injuries, the group is finding their momentum and remain anchored, in part, to Schneider’s leadership. She says she has earned a little bit more respect as a junior, but says that goalkeepers naturally take on the role of a leader since they see the whole field. With Schneider at the helm of a solid unit on the field, she has confidence in the success of the program. She and D’Agostino both said, however, that taking it game by game is key, as is learning from their mistakes to create a real shot at the playoffs.

“We’ve asked a lot of a lot of girls on our team. We have a lot of people stepping up and helping out,” Schneider said. “I think just [having] that final goal and seeing it all the way through, I think that we’ll be fine.”