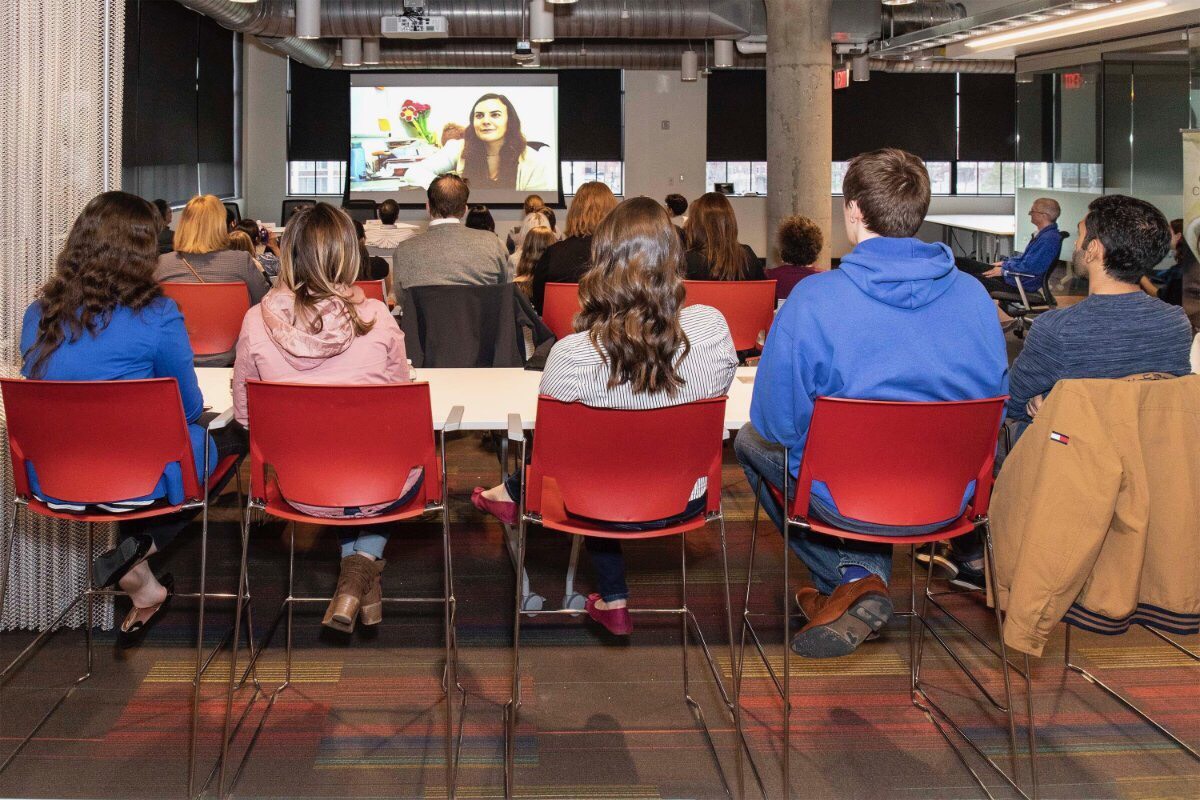 Students gathered at the Innovation Hub on April 11 to watch the film “She Started It.” (Photo: David Bragdon)

On April 11, the UMass Lowell Innovation Hub and the Manning School of Business hosted a screening of the film “She Started It” followed by a Q&A panel of local entrepreneurs.

“She Started It” focused on the stories of Thuy Troung and Stacy Ferreira. The film showcased the ambitions of these two women trying to navigate themselves in the world of Silicon Valley and tech start-ups. The film also featured some smaller stories from other female entrepreneurs: Sheena Allen, Brienne Ghatouritar and Agatha Molinar.

One of the big messages that comes out of the film is the lack of women in Silicon Valley and the lack of women in start-up companies. This gender imbalance means there are not many role models for young women looking to get into the industry. Those that are in the industry also have faced their own pressures especially in the way they are perceived. Steps are being made to integrate more women into Silicon Valley and start-up companies, but it is a gradual process.

After the conclusion of the film, the event transitioned to a Q&A panel featuring Erin Keaney, chief operating officer (COO) and co-founder of Nonspec, a company that helps provide affordable and adjustable prosthetic limb systems to all amputees; Nicole Mauro, president of medical-device maker Harmonus Inc.; and Katherine Collins, a director of Prosperity Catalyst, which provides a market for goods made by women in Iraq and Haiti.

Keaney and Mauro said they themselves have not experienced any sort of gender bias but do acknowledge that it does exist in the industry just not in an outright manner. What Keaney has experienced is not sexism, but ageism. She talked about her experience of being looked down upon based on her age especially in a business that deals with medical devices. Keaney did earn a Ph.D. which helps her gain some respect when she is not taken that seriously due to her age.

Mauro says to, “Be careful and do your research.” She says that people in the industry understand which companies are good and bad regarding gender bias. As shown in “She Started It,” talking with other people in conventions and conferences is the best way to help oneself grow as an entrepreneur and meet new people who can help either directly or indirectly.

One of the big pieces of advice shared from the panel was to write down the feedback as much as possible. Keaney says to use that feedback to improve the fine details and tweak out things about oneself, one’s pitch, etc. What was lost in the film for Mauro was the idea that big companies have their own failures as much as smaller ones. She said that failure was “something in your business life you get used to and learn from.” However, Collins says to not use the feedback to change oneself into something inauthentic. “You [shouldn’t] re-invent yourself in their image,” said Collins.