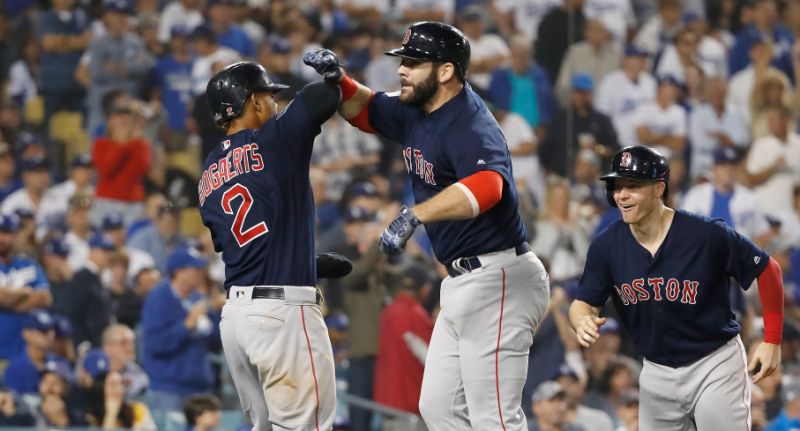 The World Series is over. They’re dead. The Los Angeles Dodgers are dead. The Boston Red Sox are up three games to one over the LA Dodgers, but the series was over well before the first pitch was made.

The 2018 Boston Red Sox have been a machine throughout the entire season. After setting a franchise record with 108 wins, anything less than a World Series championship would be a disappointment. The Red Sox absolutely steamrolled through the regular season en route to their third consecutive division title and then steamrolled over the 100-win New York Yankees and the 103-win Houston Astros en route to their fourth World Series appearance since 2004.

The Sox have had their doubters all season, sure. They weren’t even favored to win their division.

The Red Sox added JD Martinez, a guy who was cut from 4 teams over his career and was heading into free agency after the only great year of his career when he hit 45 home runs. The Sox also had one of the weakest starting rotations in baseball after Chris Sale and David Price, and had a horrid bullpen aside from closed Craig Kimbrel. Mookie Betts had a down year in 2017, as did Xander Bogaerts. Dustin Pedroia’s health was a huge question mark as well. And oh yeah, the team hired Alex Cora as the manager, who had only a single season of coaching, which was as the bench coach for the Astros.

Although Boston sports talk radio would have you believe the Red Sox were the worst team in baseball, they were the opposite. After a hiccup during the first game of the season against Tampa Bay, the Red Sox rattled off win after win after win. JD Martinez launched dingers all over the place. Mookie Betts hit an astonishing .346 and hit 32 homers in a bounce back season. And the favored Yankees? They stumbled around, losing games to the dregs of the American League while Stanton struck out 200 times, Judge missed 2 months with injuries, and their starting rotation sucked in the second half.

Meanwhile the LA Dodgers were dreadful all year, underperforming after a World Series appearance in 2017. Star shortstop Corey Seager underwent Tommy John surgery, and NL Rookie of the Year Cody Bellinger struggled in his sophomore campaign. Ace Clayton Kershaw struggled and missed a lot of time. Matt Kemp was a huge bright spot and likely the Comeback Player of the Year, and after the acquisition of Manny Machado at the trade deadline, the Dodgers went on a tremendous run to get into the playoffs.

The Red Sox are so much better than the Dodgers. David Price seems to have figured out his postseason woes, winning his last two starts after an abysmal 0-9 in postseason starts. The bullpen, the weakness of the team that was evident all year, has been lights out. Jackie Bradley Jr., a great defensive center fielder, has come up with huge clutch hits all playoffs. Rookie manager Alex Cora has made all of the right decisions, even if they don’t seem to make the most sense at the time.

LA itself is lifeless. The fans are fair weather, Kershaw throws beach balls once the playoffs start up, and the team can’t seem to get over the hump and win the big one. The Red Sox have an opportunity to kill off the Dodgers for good, because they won’t be back. Kemp’s outstanding run isn’t sustainable, Machado is gone after the season, and Kershaw will be another year older. The Dodgers do have promising pitcher Walker Buehler, but he’s still unproven.

The outcome doesn’t really matter, because the series is already over. The Dodgers could rattle off three straight wins and the series won’t be in doubt. Not that the Dodgers will, they choke far too often to have that be a legitimate concern. The Sox are built better, have stronger bats, and have more passionate fans than the soulless city of LA could ever have.

So, here’s to the Dodgers of Los Angeles. The Red Sox will remember you fondly, holding a candlelight vigil for the loss of you season, reading your eulogy. You guys never had a chance.

They’ll remember you for what you tried to be but could never pull off. They’ll remember you not as the powerful victors of the National League, but as the doormats they wiped their feet on as they snatched the World Series trophy from your pathetic grasp. Remember that every strikeout was another nail through the neck. Each home run from Eduardo Nunez and Brock Holt was a stake through the eyes. Every 100 MPH fastball from Nathan Eovaldi was a gunshot to the groin. And every out was one more shovelful of dirt being thrown into the six-foot-deep hole your casket lay.

Perhaps you’ll find some solace in the mausoleum from the Cardinals of ‘04 and ‘13, and the ‘07 Rockies. Hopefully the parade on Lansdowne street doesn’t cause too much of a ruckus to you guys. Cue the duckboats!

Editor’s note: this story was written during game three of the World Series