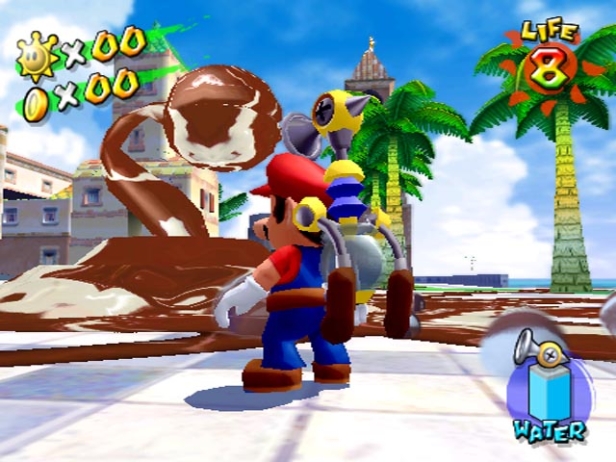 The game sold 400,000 copies in Japan within 4 days. (Photo courtesy of Nintendo)

“Super Mario Sunshine” was released on the GameCube in 2002 and has become a favorite for Mario fans over the years. For a video game to be considered great, the gameplay has to be nearly flawless and fun, the music superb, the graphics to be excellent and for the plot to be intricate. “Super Mario Sunshine” does not excel in any of these categories.

The game follows Mario, Princess Peach and the Toadstools to Isle Delfino, a tropical island paradise for the gang to take a much needed vacation. While there, a villain resembling Mario vandalizes the island with graffiti and the natives sentence the real Mario to clean the entire island before he or his friends are allowed to leave.

The gameplay mechanics are pretty clunky; the close-up camera that Mario uses to view areas from a POV perspective zooms in and out and there are some areas where Mario cannot use that camera at all. The standard Mario mechanics are fine, pressing “A” performs jumps and pressing “R” activates FLUDD. Nintendo took no real chances to utilize the GameCube’s multi-button controller as the d-pad and joystick perform the same actions and there is no use for the “z” button at all.

Movement is a pain as well. Mario moves incredibly fast which makes precise platforming difficult, and his multiple jumps make easy jumps harder than they should be.

The level designs are a treat in this game. Similar to “Super Mario 64,” there are many areas for Mario to travel through, and since each area has eight levels, a different part of the area is highlighted each time and a specific path is needed to beat the levels. A water level like Noki Bay has a great fisherman-esque vibe, and the beach areas of Gelato Beach and Sirena Beach exhibit a cool, surfer friendly feel. Each area lets players know exactly what they are getting into when they enter the level.

The levels the player gets to play in are incredibly unique and the boss fights are a lot of fun. Petey Piranha, Gooper Blooper and Bowser himself are just some of the bosses Mario gets to fight and finish in ways that have not been seen in any previous Mario games. Props to the developers for thinking of different ways to provide combat.

The gameplay variety in the levels are beyond atrocious, though. The areas may have interesting premises for a few levels, but not all levels. Each area has a “collect the red coins” level, a “chase the imposter Mario” level, a “platforming level with no FLUDD” and a “clean up the paint level” somewhere sprinkled in. Each time Mario enters a world, these levels are expected and are not that fun to complete when players know what is coming in half of the levels before they have even played them.

Why are there so many enemies in this game? It is a Mario game, but the enemies feel secondary. Mario can beat the whole game without defeating an enemy that is not the boss because enemies are so avoidable. There is little to no reason to engage in combat with anything as the rewards do not match the time put forward in beating them.

Speaking of the whole game, Mario can beat the game without actually cleaning the whole island or collecting all of Isle Delfino’s Shine Sprites. In fact, less than half of the 120 Shine Sprites can bring a player to the end credits. Why reward players for beating the game when half of the game can still be played? Nintendo has done this before in its games, but unless players used glitches in a game like “Super Mario 64,” they still had to collect at least two-thirds of the 120 stars. Super Mario Sunshine had eight years to address that issue and made it much easier to beat the game instead of increasing the difficulty.

The soundtrack to the game is not anything spectacular, but nothing felt too bland or out of place. The original Mario theme is remixed a few times in certain levels and that was pretty cool, but not one area had a great sound to it.

Super Mario Sunshine is an overrated game that coasts by because it was “Super Mario 64” on the newest console. The soundtrack was weak, the gameplay mechanics were disjointed and the variety of the levels was disappointing. If it was not for the cool boss fights and amazing area displays, this game should be considered to be one of the worst in the Mario franchise. It is time for “Super Mario Sunshine” to retreat to the shadows and stay there.