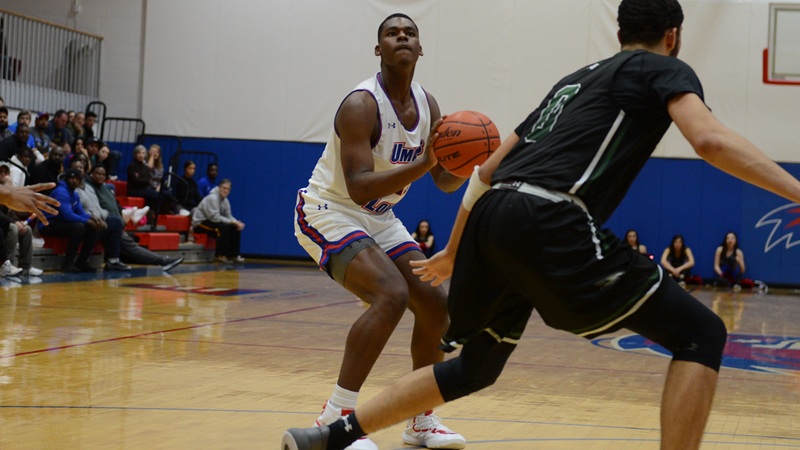 The UMass Lowell men’s basketball team (6-6) bounced back in their 110-63 rout of the Maine-Fort Kent Bengals (2-9) this past Friday night. The team had five players scoring in double figures with redshirt junior Christian Lutete scoring a team high 20. Freshman guard Alex Rivera recorded his first collegiate career double-double with 18 points and 12 rebounds.

“Both teams played hard. [You have to] give a lot of credit to those guys coming into an arena like this and making a lot of shots especially in the first half,” said assistant coach Biko Paris. “I thought those guys did a great job sharing the ball. I think our guys did a good job in the second half after we made a couple of adjustments buckling down and focusing more on the defensive end and getting out in transition.”

The River Hawks were coming off a disappointing loss on Tuesday night and were looking to rebound in front of their home fans. UMass Lowell has made it a habit to come out of the gates with full intensity in their games and tonight was no different as they jumped out to a 25-9 lead with a little over five minutes in the first half. Midway thru the first half, the River Hawk faithful were treated to an excellent 3-point display as senior guard Ryan Jones and Bengal’s guard Chance Cole traded buckets. Cole was the only Bengal who was able to generate his own shot throughout the game. He finished as the visitor’s leading scorer with 24 points and 12 rebounds.

“We sell all these upsets all the time,” said assistant coach Paris. “I think even when we go and play teams like UConn and Duquesne or when teams [of lower strength] come in here [Tsongas Center] and play us, we make it more about us.”

The River Hawks currently lead the nation in totals assists. They added to that total as they finished game with a team total of 29 assists.

“I think the coaches definitely do a good job of encouraging us of moving the ball. If we’re over dribbling, they’ll definitely let us know,” said Jones. “We have a lot of unselfish people on the team and when we get the ball moving everyone gets high percentage opportunities, and we understand that so we just try to do that every day.”

“It’s been good but it’s been hard. Endless days of putting in extra work after practice trying to catch up to these guys, “said Blunt.

The River Hawks had contributions from all ten players that suited up for the game.

“Overall I think it was a good night for our guys and getting a lot of our younger guys on the court playing more minutes than they usually do is always good thing, “said assistant coach Paris. “And getting our older guys like Ryan [Jones] and Josh [Gantz} a couple minutes to rest is always a good thing especially with two big games coming up before the Christmas break.”

The River Hawks will return to action for their last game before the holiday break as they visit the St. Francis Brooklyn Terriers at 7 p.m. on Tuesday night.