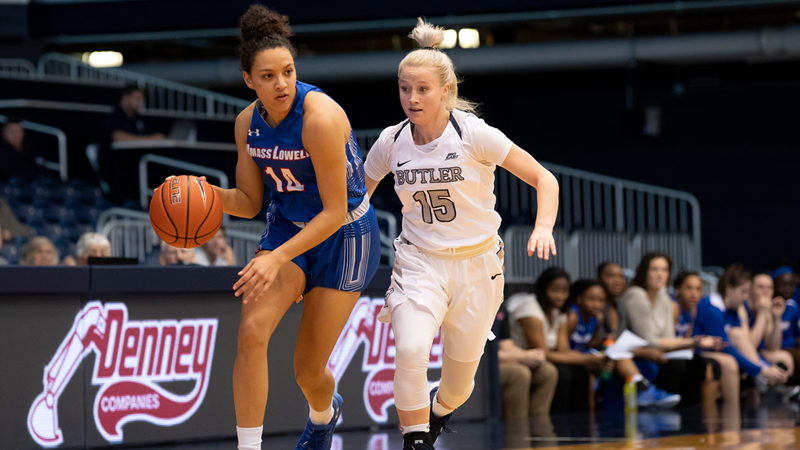 “My main thought is disappointment. I’m unhappy at this moment because I thought we allowed our opportunities to slip away from us,” said head coach Tom Garrick. “Colgate came in very prepared, and they made us alter our style of play. We couldn’t make the adjustments, which is on me, and I’ll take the blame for that. I’m most upset that I did not have our kids prepared to play the right way.”

The game started off with multiple passes from the UMass Lowell offense looking for an easy shot out of Colgate’s defense that ranks ninth in the country in three-point percentage allowed. Smith scored in the paint off an assist from senior guard Brianna Rudolph to start the game for the River Hawks.

The River Hawks pushed he tempo early to catch the defense off guard and find easy and efficient baskets. UMass Lowell shot 60 percent from the field in the first quarter and held Colgate to 35.7 percent shooting. Stiers paced the UMass Lowell offense in the first half scoring 10 points along with grabbing three rebounds.

UMass Lowell held the lead for the first 15 minutes of the game, until Colgate’s efficiency from three-point range put them ahead. The Raiders also forced 13 turnovers in the first half going up plus six in that category. The River Hawks went down 36-30 to the end the first half.

The River Hawks switched up their defense multiple times in the second half. They went from a full-court press to a zone and to a man-to-man style defense throughout various points in the game.

Coach Garrick said that he switched up the defensive gameplan multiple times to find the perfect defense to stop the Colgate offense.

“Typically, what you’ll find when you watch a basketball game is that if a team is changing defenses too frequently, it’s because none of them were working, and we were trying to find answers, said Coach Garrick. “I would love to stay in one defense [for] 40 minutes. That would mean everything is working [and] we’re giving the right amount of effort. That wasn’t the case tonight. I kept trying to punch a different button to see if something would be effective over he course of time.”

UMass Lowell were held to 1-11 from the three. Freshman guard Kharis Idom hit the only three for the River Hawks midway into the third quarter.

UMass Lowell cut the deficient to 45-40 in the fourth quarter. However, a Colgate three-pointer started a run for the Raiders to win the game 61-52.

The River Hawks will look to rebound from the loss and break a two-game losing streak this Saturday against Providence at the Costello Athletic Center at 1 p.m.