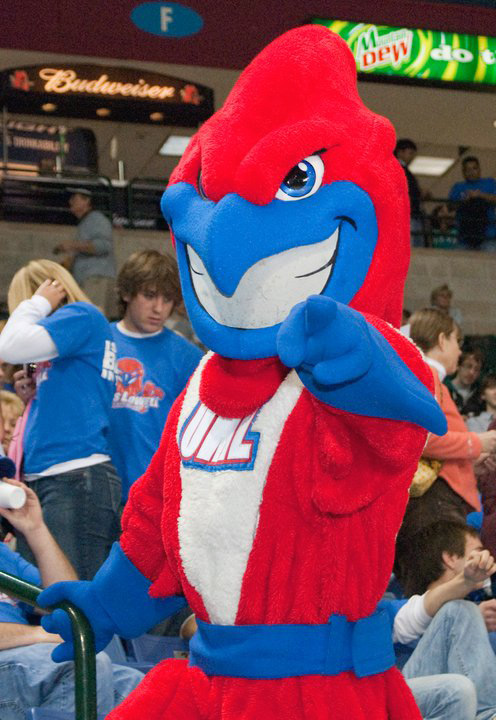 Once upon a time, Rowdy was predominantly red (Photo courtesy of UMass Lowell)

“Go River Hawks!” cry students as beloved UMass Lowell mascot, Rowdy River Hawk, runs out in front of the crowd. What would this campus do without him? Well, red and blue Rowdy was not always the cheerful mascot of UMass Lowell. He has only been here since 1994, so who was cheering us on before him? UMass Lowell has changed names many times, almost every time bringing a new mascot along with them. The first major mascot change was at the Lowell Textile Institute. In 1948, the school sported a bulldog known as Terry Tex because of the textile mills in Lowell. Students loved Terry Tex as he quickly made the institute generally livelier, even though he was not the average mascot of today. There was no one in a suit cheering people on, just a bull terrier on a banner, but it made all the difference for these students.

In 1975, UMass Lowell became the Chiefs with Charlie Chief as mascot. This decision was the conclusion of the merger between Lowell State College and Lowell Technological Institute. While the school was the Chiefs, they wanted to stay far away from the possibility of being inconsiderate towards the feelings of Native Americans. Because of this, the UMass Lowell mascot was changed from a “chief” logo to a skating hockey puck in 1993 that was not well-known for intimidating opponents, so he was soon replaced.

The University gathered 154 submissions from campus and city community members at meetings, but one student suggested the Hawks in a letter to then hockey coach Bruce Crowder.

Looking to connect the idea to the Merrimack River, a committee added the River Hawks to a ballot and it won the popular vote.

Originally, there were two River Hawks, one red and one blue. These two were quickly replaced with a version of Rowdy many people wish to forget, Gruff Rowdy. Gruff Rowdy was meant to look like an athletic superhero with cape and all, but his terrifying beak and large physique scared children for over a decade. Today, students get to see much less horrifying Rowdy skating across the rink at the Tsongas Center cheering on the River Hawks!